A strong contingent of Patriots fans are skeptical of the reported growing tension within their beloved organization. According to ESPN’s Seth Wickersham, the team’s leading trio, owner Robert Kraft, coach Bill Belichick, and quarterback Tom Brady, has had several disagreements over matters like the role of Brady’s trainer Alex Guerrero and the Jimmy Garoppolo trade.

Some refuse to believe it. Criticizing Wickersham for his lack of on-the-record sources, the team’s super loyalists have seized the story as an opportunity to once again pounce on ESPN for what they believe to be shoddy reporting.

But as the Boston Globe‘s Chad Finn explained last week, on-the-record sources are sometimes impossible to secure, “often because the source has something significant at stake if he or she shares information the team does not want public.” If individuals refuse to acknowledge the complicated nature of sourcing, and in turn, the details of Wickersham’s story, so it goes.

Finn argues, however, “if the story is read with clear eyes and all rooting interests aside, it’s far more illuminating than it is salacious.” Here’s what Patriots reporters across the city have to say about the report:

As Finn noted Monday, “the one guy who could answer the Brady-Garoppolo question” is their shared agent, Don Yee, who isn’t talking. And Price predicts neither Garoppolo nor others in his camp will be commenting on the situation any time soon, either.

Despite being a central figure in the Patriots’ latest drama, the rising star has his own slate of issues to worry about as the new starting quarterback of the 49ers.

If he’s asked about the situation, two and a half seasons in New England likely taught Garoppolo the art of how to dodge a question. But there may not even be a need for him to do so. Price reports a source close to Garoppolo said there was no “ill will at all” between him and Brady.

“There was a genuine friendship between the two. They weren’t especially close, but they respected each other.”

Although Belichick seems to be focused on nothing but the Patriots’ next game, Kyed believes the head coach cares more about his imprint on the league than he may let on. With several expected changes to the coaching staff, Kyed explains that Belichick’s legacy can pervade the entire NFL if offensive coordinator Josh McDaniels, defensive coordinator Matt Patricia, and others can continue to build on their successes with other teams.

Wickersham’s story indicates Garoppolo is undoubtedly an element of the coach’s growing legacy, too. He reports Belichick “has taken pride” in his former backup quarterback’s 5-0 record in San Francisco, and even takes satisfaction from Kraft confessing to people in the building the trade “might have been a mistake.”

Wickersham also highlights the importance of Belichick’s sons, reporting that the coach didn’t want to walk away from his position before both Steve and Brian had established their football careers. Steve is currently the Patriots safeties coach, while Brian is a coaching assistant.

“While coaches like McDaniels and Patricia forever will be known as Belichick guys, they don’t carry his actual name,” Kyed writes. “If Steve and Brian have coaching success, then the Belichick legacy truly will continue on for decades to come.”

NESN’s Doug Kyed: “Why Patriots never could have kept both Jimmy Garoppolo, Tom Brady in 2018”

Kyed also explained why the team’s cap space would have made it extremely difficult, if not impossible, for the Patriots to have kept both Brady and Garoppolo on their roster:

Franchising Garoppolo would have cost New England around $23 million next season. The Patriots, with an estimated $176 million salary cap in 2018, per Spotrac.com, have just over $17 million in cap space heading into next season.

Before they brought back or signed a single free agent, the Patriots would be $6 million over the salary cap if they franchised Garoppolo.

The Boston Globe‘s Ben Volin: “Why can’t the Patriots tell the truth about the Garoppolo trade?”

Volin isn’t buying any of the Patriots’ denials when it comes to the Garoppolo trade — not Kraft’s, nor Belichick’s, nor Brady’s.

The Patriots clearly traded Garoppolo out of loyalty to Tom Brady. Belichick wanted to keep Garoppolo for the future, but Brady is serious when he says he wants to play until he’s 45, and the Krafts made it clear to Belichick that Brady isn’t going anywhere this offseason.

It’s the only scenario that makes sense.

And you know what? That’s OK! Everyone in New England loves Brady and can see that he’s still going strong at 40. And even if he does lose a step, so what? If there’s one player worth breaking the rules for, it’s Brady.

The Boston Globe‘s Ben Volin: “Consistency, the theme of the Patriots’ dynasty, may be coming to an end”

A league source tells Volin that the Patriots dynasty is “going to end, and when it does, it’s going to explode.”

While there’s some lingering hope around New England that some personnel will stick around, it appears that Wickersham’s reported “lingering sadness” may be reality. Both McDaniels and Patricia are two leading candidates for teams with head coaching vacancies this offseason. Even linebackers coach Brian Flores is garnering interest from the Cardinals for their head coach opening.

Consider it the cost of victory. Everyone wants a piece of the Patriots.

Curran takes a look at the framing of Wickersham’s story and asks readers to try and approach the accounts from Brady’s perspective.

Flip it. Look at it through Brady’s eyes.

For 18 years, he’s happily subjugated himself for the greater good. He’s taken millions and millions less than he could have commanded. He’s kept his lips buttoned about personnel moves and what the Patriots have surrounded him with offensively.

He’s taken his verbal floggings along with everyone else. Maybe he’s taken even more because he knew that – in taking them – the greater good would be served. If teammates see he can deal with it, how can they complain when they get it too?

Curran says he was told Kraft never told Belichick that Tom Brady was off-limits from a trade or a release. But his sources also tell him that if Belichick were to have approached Kraft about one of those possibilities, the move would have been strongly discouraged.

Curran didn’t specify whether Kraft issued a mandate to trade Garoppolo, but he reports that the Patriots did not extend a new contract offer to the 26-year-old.

No question they discussed it and spitballed about what it would look like — great pay as a backup escalating to starter money when Brady left — but the offer was never formalized. Why? Because it was clear Garoppolo wasn’t staying another year as a backup. The Patriots had no workable solution for solving a win-win problem (the greatest ever or a future franchise QB) that would have kept them both here.

As for how the media reports will affect the team’s upcoming postseason campaign? Price says it’s going to negligible.

For the most part, that “Us Against The World” narrative that people believe exists in the walls inside of Gillette Stadium is overblown. I communicated with two players on Friday morning after the news broke, and both of them sort of rolled their eyes at the story. For the most part, this is a fairly steady team made up of guys who are cognizant of what they need to focus on at this time of the year.

Price also shared his thoughts on the quarterback drama, the inevitable end of the dynasty, and the Patriots’ plans for the future. From his perspective, the looming loss of both McDaniels and Patricia is the strongest contributor to sense of sadness surrounding Gillette Stadium.

The biggest takeaway from ESPN’s long-form piece about the power struggle between Brady, Belichick and Robert Kraft was, some inside the Patriots building believe this could be Belichick’s final season as head coach of the team. Having to deal with Alex Guerrero and Brady, as well as Kraft meddling in football matters (like the Jimmy Garoppolo trade) may be too much for him deal with. And at 65 years old he could leave the organization he’s been head coach of since 2000.

Hannable believes the person most likely to leave the Patriots after this season is Belichick. Hannable isn’t surprised there have disagreements at various magnitudes; after all, they’re bound to happen when three individuals — with big egos — work together for nearly two decades. But he doesn’t expect Kraft will let Belichick leave New England without a fight.

Kraft’s legacy is as much at stake as it is for Brady and Belichick. Does Kraft want to be known as the reason why the Brady-Belichick relationship ended so poorly and the long-time coach called it quits after his 18th season? The Patriots owner wouldn’t let Belichick walk away.

The Boston Herald‘s Jeff Howe: “Don’t close down the Patriots dynasty just yet”

According to Howe’s sources, “Brady never demanded the Patriots trade Garoppolo” to Kraft or to Belichick.

And trading Brady was never on the table, either.

Howe’s sources also say that Brady and Belichick “did not see eye-to-eye” over Guerrero’s involvement with the Patriots.

There was some tension as it came to a head, according to sources. But last month, two of those sources told the Herald the Guerrero episode didn’t drive a wedge between Brady and Belichick. 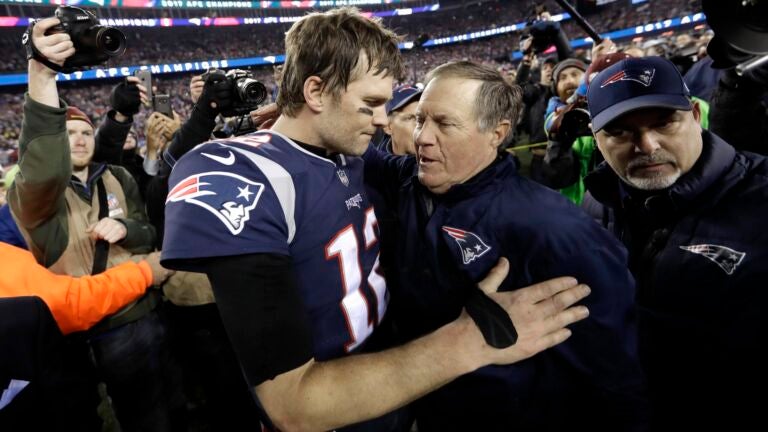