MINNEAPOLIS — There was a company line among the New England Patriots, and no one was willing to cross it.

“You have to ask the coach,” Stephon Gilmore said when asked why his fellow starting cornerback, Malcolm Butler, was benched during the Patriots’ loss to the Philadelphia Eagles in Super Bowl LII on Sunday. “I don’t know.”

It was more of the same from Duron Harmon, a safety, who said, “You have to ask coach. Coach makes all the personnel decisions and I just play football.”

Devin McCourty, also a safety, hardly elaborated compared to his fellow defensive backs, but he at least acknowledged that they were not talking.

That coach, of course, is Bill Belichick, the famously tight-lipped mastermind behind the Patriots’ five Super Bowl championships. And the player he benched is not just the starting cornerback, but the hero of New England’s victory over the Seahawks in Super Bowl XLIX. Butler sealed that victory with a late-game interception of Seattle’s Russell Wilson, cementing his place in New England’s rich football history.

Watch: Belichick on Malcolm Butler—“We put the best players out there that we thought would be the best tonight.”

For some teams, asking the coach might provide some illumination into a controversial decision like this one. But with the Patriots, the line of questioning hit a complete dead end.

“No,” Belichick said when he was asked if Butler was benched for a disciplinary reason.

“Yes,” he replied when asked if the decision was strictly about football.

When pushed to offer something more, at least in terms of why Eric Rowe, a backup cornerback, was a better fit than Butler to start against the Eagles, Belichick elaborated ever so slightly.

“We put the best players out there and the game plan out there because we thought it’d be the best to win,” he said.

Rowe said he found out about the switch just before the game Sunday. He praised Butler’s talent, and did not shy away from the many missteps that both he and the rest of the team’s secondary made in the game.

Asked if Butler could have helped, Rowe said, “Yeah, we could have used anybody.”

Whatever the reason, Butler’s benching backfired. The decision to limit him to special teams play, whether it was based on matchups, unhappiness with his recent play, or a punishment that Belichick was unwilling to discuss, resulted in the Patriots playing the game without a cornerback who had been on the field for more than 97 percent of their defensive snaps this season, more than any other defensive player.

When you consider that Nick Foles, the Eagles’ backup quarterback, shredded the Patriots’ secondary for 373 passing yards, and the Eagles converted 10 of 16 third-down opportunities, the absence of a stalwart of the defense could not have stood out more as something in need of an explanation.

Watch: Matt Patricia on Butler—“We’re trying to put everybody in the right spot.”

A visibly distraught Butler discussed the game with ESPN before he left U.S. Bank Stadium and he seemed truly convinced that the team had simply soured on his ability to help them.

“I guess I wasn’t playing good,” he said. “They didn’t feel comfortable.”

But he also added words that likely resonated for every frustrated Patriots fan who watched as the Eagles repeatedly found space in the secondary when he said, “I could have changed that game, though.” 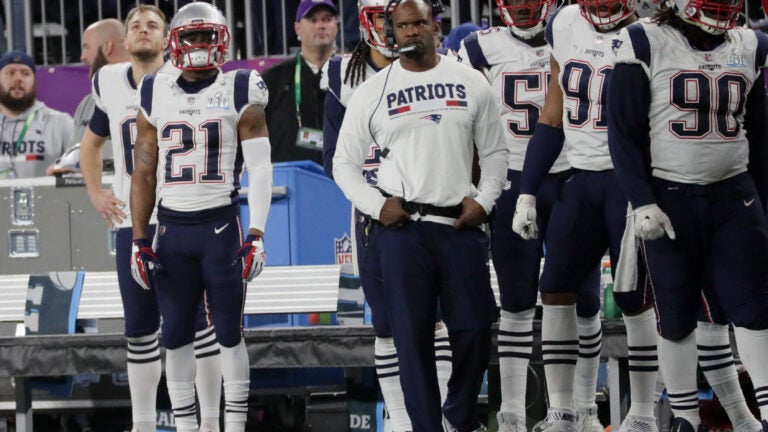 Malcolm Butler says the Patriots ‘gave up’ on him