Patriots quarterback Tom Brady was the latest guest to sit down for a conversation with Oprah Winfrey, as part of the “SuperSoul Sunday” program on her television network, OWN.

In the interview, which aired on Father’s Day, Brady and Winfrey discussed a number of topics, including his journey to the NFL, the challenges of managing football and parenthood, his impending retirement, and the importance of spirituality.

“I’ve been so fortunate to do something I love to do — and it’s televised every Sunday for half the year,” Brady told Winfrey. “People love football and I’ve been able to be in people’s homes that way for a long time.”

The losses have become easier for him to digest.

Brady said it took him only two or three weeks to get over the New England’s 41-33 defeat to the Philadelphia Eagles in Super Bowl LII.

“It was a different year this year,” he told Winfrey. “In some ways, this year was easier for me than it has been in the past. It’s not that I don’t want to win the same. It’s just there are other really important things as well.”

Brady said his children have reminded him that life goes on following a loss. He said he was “a little depressed” about this season’s outcome, but his feelings were nothing compared to the living nightmare when the New York Giants beat the Patriots in Super Bowl XLII. He said it took a month for him to feel like himself.

While the losses have become easier to manage, the victories have only become sweeter with age. After eight Super Bowl appearances and five championships, Brady said the joys of winning have grown with each title. He said he didn’t have the perspective in his early 20s to appreciate the first trio of wins.

“The success early in my career — we won three Super Bowls in four years — I didn’t even know what happened in my life,” he said. “We won these Super Bowls and everyone was like, ‘This is unbelievable,’ and I was like, ‘What’s going on?'”

After a decade-long gap of no championships, however, he said he has been able to savor the feeling a bit more the next time around.

Despite his success, Brady said he still doesn’t like being called the greatest quarterback of all time.

“I don’t like it at all,” he said. “I don’t feel that way. I’m not attached to that feeling. I don’t care whether people think that or not. I want to be the best that I can be.”

The end is ‘coming sooner rather than later.’

Brady, who has insisted he wants to play until his mid-40s, acknowledged the end of his football career is in sight.

“I think about it more now than I used to,” he said. “I think now I’m seeing there’s definitely an end coming sooner rather than later.”

The 40-year-old did not specify exactly how many seasons he has left in the tank, but maintained his intention is to continue playing as long as he’s loving the game and all that goes into it.

“As long as I’m loving the training and the preparation, I’m willing to make the commitment,” he said. “But I think what I alluded to a lot in the docu-series is that there are other things happening in my life, too. I do have kids that I love, and I don’t want to be a dad that’s not there driving my kids to their games. My kids have brought a great perspective to my life. Kids just want the attention. You better be there and be available to them. “

In his docu-series, “Tom vs. Time,” Brady negotiated two more Super Bowl titles with his wife, Gisele Bündchen, who has not been shy about the desire for her husband to retire. But Brady said the time is not right.

He brushed any rumors of turmoil under the rug.

“Is there something going on with you and [Bill] Belichick?” Winfrey asked.

“No,” Brady said after a brief pause. “I mean, I love him. I love that he is an incredible coach, mentor for me. He’s pushed me in a lot of ways. Like everything, we don’t agree on absolutely everything, but that’s relationships.”

Winfrey also asked if Brady has “a separate training place” where he practices privately — referencing the TB12 Sports Therapy Center he opened with his trainer Alex Guerrero in September 2013.

“No, I wouldn’t say that,” Brady said. “I probably do some of my own techniques a little differently than the rest of the team. The team, I would say, like most teams, is very systematic in their approach. What I learned, I guess, is different than some of the things that are systematic, but that work for me.”

“It’s nothing that I don’t talk about with my coach and owner,” he continued. “It is what I want to do and is what I need to be the best player I can be. Hopefully, you can support that.”

He was aware of the response when he kissed his son on the lips, but doesn’t care.

Brady said he’s not concerned about the mixed reaction surrounding the kiss on the lips he gave his older son, Jack, in an episode of “Tom vs. Time.”

Those hugs, kisses, and tickles are Brady’s favorite part about being a father, but he admitted he was a little concerned about how Jack would be perceived by his peers.

“I was wondering maybe the kids at school say something because maybe they watched,” he said. “That’s probably more what I thought about. Is he going to have deal with kids coming up to him and teasing him? It’s hard for kids.” 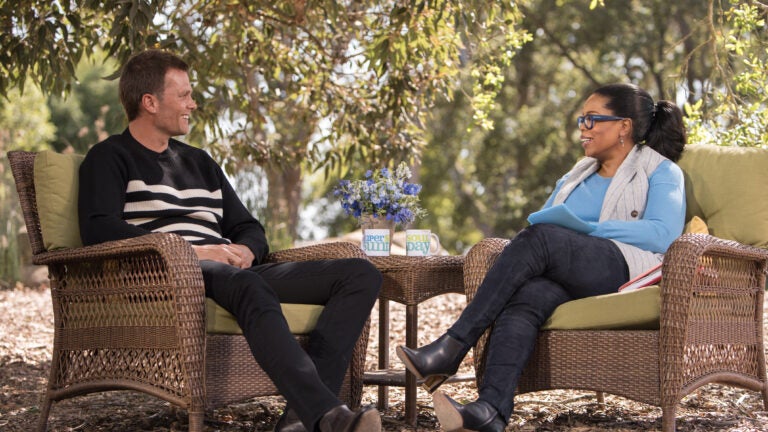 In interview with Oprah, Tom Brady praises impact of players kneeling during the anthem