Ben Watson, 14 years removed from the Patriots making him a first-round draft pick, says he’s retiring after this season.

“The body struggles more and more, and it becomes evident that it’s time,” the veteran tight end told reporters in Metairie, La., on Thursday. “It’s always a very hard thing, but my mentality this year has definitely been to perform to the best of my ability, to fight through different things and different setbacks.”

In his second tour with the Saints, Watson made the announcement via an NFL Films video about his family.

After 15 years of football, @BenjaminSWatson is ready to hang up his jersey and fully enjoy his #1 job as a father of five, as he awaits his two newest additions. #NFLFilmsPresents: Ben Watson@Saints pic.twitter.com/pXnYlXL7hB

Watson has caught 33 passes for 371 yards and two touchdowns this season in helping the Saints capture the top playoff seed in the NFC. After one of his touchdowns, Watson, a father of five, celebrated by holding up seven fingers, signaling that twins were on the way.

“She’s due in May, the baby is going to probably come around April,” Watson told NOLA.com. “It’s going to be a crazy house with the five that we already have. There’s going to be probably a move there, but to be able to be home and focus solely on that, it’s going to be good for all of us, definitely.”

Just two years after spending a first-round pick on tight end Daniel Graham, the Patriots snagged Watson when the Georgia product fell to No. 32 in the 2004 draft. His strength, speed and intelligence quickly earned him the starting role, and his 20 receiving touchdowns from 2005-09 were second-most on the Patriots to Randy Moss in that span.

His most memorable Patriots play, however, arguably came in a game in which he didn’t have a catch. In the Divisional Playoffs at Denver on Jan. 14, 2006, Watson denied Champ Bailey a 101-yard interception return late in the third quarter by racing the length (and width) of the field to knock the cornerback out of bounds just before the goal line.

Bailey appeared to fumble the ball past the pylon and out of the end zone, which would’ve resulted in a touchback and given the Patriots back the football, but the referees disagreed. The Broncos scored on the next play and went on to deal Tom Brady his first-ever playoff loss.

“I had people from MIT and Harvard tell me that they’ve done case studies on the direction and the wind and all that stuff and there’s no way that wasn’t a touchback,” Watson said earlier this year. “But I guess that’s home-field advantage.”

Watson left the Patriots for Cleveland on a three-year free-agent contract following the 2009 season, then signed on as Jimmy Graham’s backup in New Orleans for 2013. He spent last season with Baltimore before returning to the Saints in March.

Watson has 5,856 yards and 44 TDs receiving in his career. His 528 regular-season catches ranks No. 14 among tight ends. 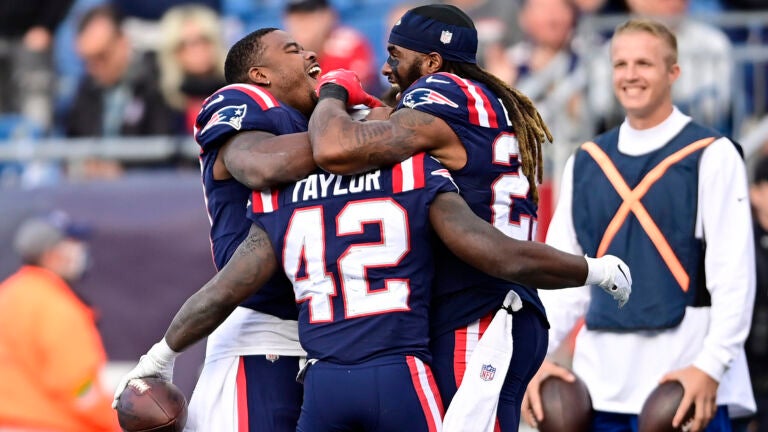