Rondeau, a seventh-grader from Exeter, New Hampshire, is the quarterback for the Exeter Seahawks. She started three games for the team, comprised of seventh- and eighth-graders, after the initial starter went down with an injury.

“Some people don’t want to accept a female quarterback. She’ll have to put in 110 percent when others are putting in 50,” Brock said. “But Dejah becoming the quarterback is the best thing that could happen to her. She’s worked really hard at it.”

When the Patriots heard Rondeau’s story, they brought her to Foxborough for a tour of the trophy room with owner Robert Kraft and a game of catch with Edelman.

“Heard we’ve got a quarterback here to take [Tom] Brady’s spot,” Edelman said as he shook hands with Rondeau.

When he heard she was getting bullied at school, he had a #SuperBowlSurprise for her. pic.twitter.com/NVyhkfv8Hr

Edelman knows a thing or two about the position himself. He played quarterback in high school and at Kent State University, and Rondeau has attended his pro-passing camp for youth football players.

“I heard about your story, about going out there and having a challenge, of dealing with adversity because people not accepting this, that,” Edelman told her. “My respect level for you is just through the roof because you just ignored all the noise and you played the game we all love and that’s football.”

The wideout had a final surprise for the young visitor.

“We’re gonna bring you to the Super Bowl, too, if that’s cool,” Edelman said as he handed her two tickets to Super Bowl LIII in Atlanta. “Do you have any plans next Sunday?”

“That was crazy,” she said afterwards. “I never knew — I never thought that would ever happen. I’m just really excited to go.” 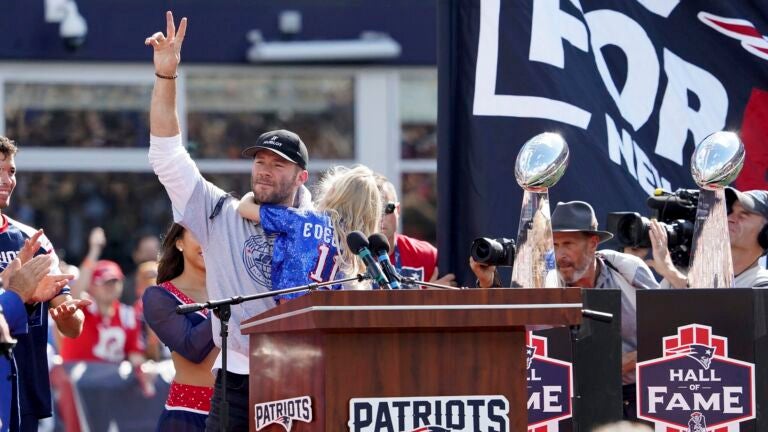 Julian Edelman joins list of those concerned about Patriots' offense