ATLANTA (AP) — For five plays, and for 2 minutes, 49 seconds, Tom Brady looked like Tom Brady and the Patriots offense looked like the one that cruised up and down the field for most of the season.

Turns out, that’s all they needed.

On a day that knocked two of the NFL’s highest-flying scoring machines back into the 1970s — or ’50s — Brady mustered one good drive when it mattered.

He went 4-for-4, including a perfect teardrop nestled into the hands of Rob Gronkowski , to set up the game’s only touchdown on the way to a 13-3 victory over the Los Angeles Rams.

New England won its record-tying sixth Super Bowl title. Brady became the first player to win six rings. All on the strength of one measly touchdown — in the lowest-scoring Super Bowl ever.

“We could’ve played better offensively,” Brady said, “but the reality is, you get into these games and you just need to figure out a way to win it.”

Make no mistake — they won it with defense. And kicking. And Julian Edelman, the diminutive receiver who found gaps in the Los Angeles zone and caught a game-high 10 passes for 141 yards. He was named Most Valuable Player.

Brady, who has won that award four times, was fine — but nothing more — until the drive that began with 9:49 remaining, with the game tied at 3 in the first Super Bowl to go three quarters without a touchdown.

He hit Gronkowski for 18 yards, found Edelman in the zone for 13. He threw a dump-off pass to Rex Burkhead for seven. Then, the best pass of the day — the 29-yard completion to Gronkowski, who was double-covered and had Rams linebacker Cory Littleton practically dragging him to the ground as he made the catch.

“Tom threw it to me and I had to make a play,” Gronkowski said. “I just come through whenever it’s that time. He knows to trust in me.”

Sony Michel took the handoff on the next play for a 2-yard score. Anyone who had only tuned in for that drive might have wondered what all the fuss — and all the yawning — was about.

For anyone outside of linebackers, defensive coordinators and people who bet the under (56 ½ points), this was ugly.

Brady and the Patriots looked nothing like the team that averaged more than 27 points a game this season, that put up 37 points against the Chiefs in the AFC title game, that didn’t allow a sack — and barely allowed Brady to be touched — in the two playoff games leading to the trip to Atlanta.

Brady finished 21 for 35 for 262 yards and an interception. He got sacked once but harassed a lot more by Rams defenders. The Rams would’ve gladly said ‘yes’ if someone had told them they’d give up just 13 points to the league’s biggest big-game quarterback.

On this day, it didn’t quite go like that. And it was a far cry from two years ago, when the Patriots scored 31 points in the second half for a 34-28 come-from-behind win over Atlanta and title No. 5. Or even last year, when they moved up and down the field with the Eagles, but lost 41-33.

In this one, Brady’s very first pass— after New England started the game with four straight runs that got them to the Rams 34 — got tipped up by receiver Chris Hogan, who collided with Nickell Robey-Coleman, then picked off by Littleton.

After that, the Patriots moved the ball, but ended up with very little to show for it. They outgained Los Angeles 195-57 in the first half but had one Stephen Gostkowski field goal — and another Gostkowski miss — and a paltry 3-0 lead.

The Rams tied it late in the third quarter, and this became the first Super Bowl in the 53-year history to head into the last 15 minutes without a touchdown.

Then, suddenly, Brady looked like Brady again. It didn’t last long. It was all the Patriots needed. 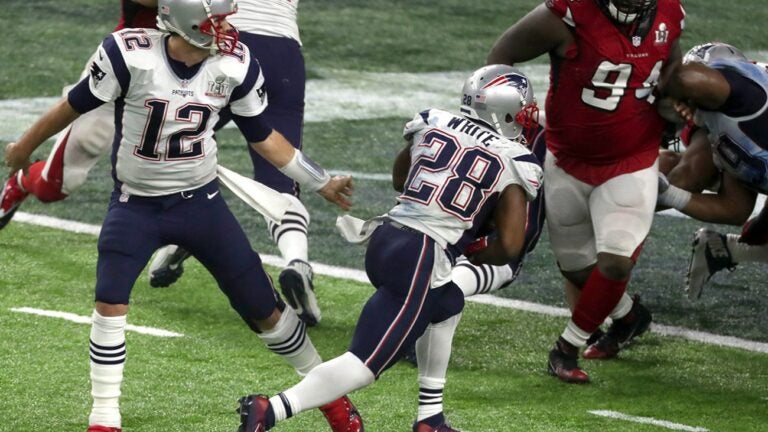