Julian Edelman arrived in Foxborough in 2009 as a hardly known seventh-round draft pick, a college quarterback attempting to reinvent himself as a kick returner and backup wide receiver under former Patriot Wes Welker, who carved out a distinct role for slot receivers in the Patriots’ offense.

A decade later, Edelman, 32, is one of the faces of the franchise. He has excelled in the slot receiver role after succeeding Welker when he left for the Denver Broncos after the 2012 season. Edelman was named the MVP of Super Bowl LIII, where he racked up 10 receptions for 141 yards against the Rams on his way to becoming only the seventh wide receiver to win the award — and just the second Patriot not named Tom Brady to win the honor (Deion Branch won the award in Super Bowl XXXIX).

Since then, Edelman has been a busy man. Here’s a recap of how the Super Bowl MVP has spent his week.

He participated in a Super Bowl MVP press conference.

Edelman officially received the Super Bowl LIII MVP award Monday morning after a long night of celebrating. He spoke to the press along with Patriots head coach Bill Belichick.

“An absolute honor to get this award,” Edelman said. “But honestly, I’m just so proud of the group of guys that we had this year. The ups and downs we all had with just the ebbs and flows of the season. When you play a whole year, you see the team shapes up and you see how this team grinded and worked each week, when things weren’t at its best, to constantly try to go out and improve, just shows what kind of group of guys it was this year.”

Edelman’s presser also yielded an amusing anecdote about an interaction with Belichick during his rookie season. Edelman said he and the coach left Gillette Stadium at the same time one night.

“I just looked at him because I saw him on the treadmill, watching film at 10 o’clock at night,” Edelman said. “I go, ‘Coach, you sure like football, huh?’ He goes, ‘It beats being a plumber. See you tomorrow.’”

Belichick said Edelman may have misquoted him.

Happy year of the pig to all of our supporters over in China! 🇨🇳 #ChineseNewYear

He appeared on the Today Show.

Edelman made a Monday appearance on the Today Show, during which he said he hadn’t slept since winning the Super Bowl.

“Honestly, I haven’t had a real moment to sit back and kinda think about it,” Edelman said about winning the MVP award. “I was hanging out with family and … the grind of a football season is so mentally, physically, and emotionally exhausting, especially after playing a game like that, I’m really just kinda tired and just want to go home and relax on the couch.”

Edelman said he’s been blessed to play football for a job and that everything else has been “just icing on the cake.”

“It’s a dream,” Edelman said. “I mean, I remember being in eighth grade, saying ‘I’m Tom Brady,’ on the asphalt at recess, playing football.”

He popped by Disney World.

After wrapping up in Atlanta, Edelman and Brady made their way to Disney World in Orlando, Fla., for Super Bowl victory celebrations in the Magic Kingdom. Traditionally, just the Super Bowl MVP visits, but it’s no surprise that Edelman wanted his quarterback by his side.

At Disney, the Patriots’ dynamic duo dressed up as Jedi, participated in a parade, and led fans in an enthusiastic count to six.

He took in 1.5 million fans during a victory lap through Boston.

Edelman made it back to Boston by Tuesday morning in time for the Patriots’ Super Bowl victory parade. An estimated 1.5 million fans saw Edelman’s duck boat traipse through the Back Bay and downtown Boston as he reveled in cheers from the crowd.

Boston. You are insane. #LFG pic.twitter.com/JuMtknSNQY

He stopped by a Cambridge tapas spot.

After the parade, Edelman visited Cambridge tapas restaurant Little Donkey and posed for a photo with co-owners Jamie Bissonnette and Ken Oringer.

He dropped the puck at a Bruins game.

Edelman linked back up with his teammates for the nightcap of the team’s celebrations: a trip to TD Garden to watch the Bruins host the New York Islanders.

Edelman continued his busy week by traveling to Los Angeles to take the Lombardi Trophy to an episode of “The Ellen DeGeneres Show.”

In the segment, DeGeneres presented him with the Pete Rozelle Trophy, which he will take home for winning the MVP award.

“Just winning the game is what you want,” Edelman said. “But getting the MVP is kind of a win for me and my other team, and that’s my family. Getting to experience this with them because they’ve been in my corner and they’ve made me who I am. My father was a tough, hard-nosed guy who, you know, didn’t have a father and pushed me to limits I never thought I’d get to. And my mother, being the loving little lady that she is, I was never late to a practice. She was always there.”

Ellen also had the honor of shaving Edelman’s beard in exchange for donating $10,000 to the Boys & Girls Club of Boston. Edelman matched her donation with $10,000 of his own.

The Grammy Awards announced Edelman will attend the music industry’s award show as a presenter, alongside John Mayer, Meghan Trainor, Anna Kendrick, and more when the show airs on Sunday, Feb. 10. 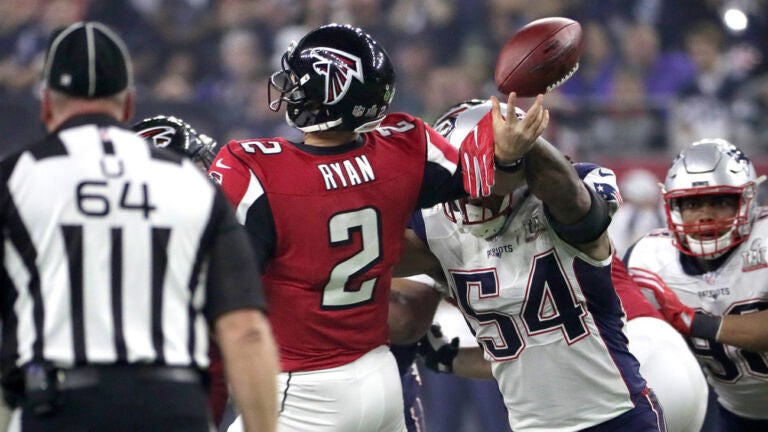