Florida investigators in January used a “fake bomb threat’’ to get inside a spa to install hidden cameras that allegedly captured New England Patriots owner Robert Kraft and 24 other men receiving sexual favors at the massage parlor for money, legal filings assert.

The details surfaced in a memo that lawyers for Kraft, 77, filed Tuesday in Palm Beach County in support of their motion to toss the video evidence. The high-stakes motion, if successful, would bar prosecutors from showing the video footage to jurors at trial. Kraft’s attorneys allege police illegally searched the spa and that the hidden video cameras the officers violated constitutional privacy protections.

Kraft faces two misdemeanor counts of soliciting prostitution inside the Orchids of Asia Day Spa in Jupiter, Fla., in January. Through representatives, he’s pleaded not guilty, denied engaging in illegal activity, and demanded a jury trial.

Jupiter police got a warrant to install the cameras, and Kraft’s lawyers wrote in Tuesday’s motion that police convinced a judge to sign off on secret filming with a claim, “founded on a fiction,’’ that human trafficking was suspected at the spa. Kraft’s lawyers allege police illegally searched the spa and that the hidden video cameras the officers violated constitutional privacy protections.

Kraft and the other men accused of receiving sexual favors at the business have not been charged with human trafficking.

After a health inspector checked out the spa at the request of law enforcement, Kraft’s lawyers wrote Tuesday, police made a “reckless leap over to human trafficking based on supposed ‘evidence’ [inside the spa] consisting of such things as observing a refrigerator stocked with food, two beds, and clothing — all of which may be routinely observed at any number of places of employment, including law offices, for reasons having nothing to do with human trafficking.’’

Kraft’s attorneys also described how police got the hidden cameras inside the spa in the first place, once they got their warrant. The information appeared under a section in the legal filing dubbed “The JPD Installs Hidden Cameras Through A Fake Bomb Threat.’’

Police on Jan. 18 caused “a phony ‘suspicious package’ warning to be issued for the Spa in order to force an evacuation, so the [Jupiter police] could install hidden cameras inside several of its private massage rooms, as well as in the spa’s lobby,’’ the filing said.

Kraft’s attorneys wrote that such “sneak and peek’’ warrants are “constitutionally problematic’’ and reserved for “extraordinary circumstances,’’ as opposed to misdemeanor acts of prostitution.

In prior federal cases cited by police to justify the camera warrant, the filing said, “the underlying criminal activity that was surveilled involved felonies that were far more serious than the misdemeanor prostitution alleged to have taken place here, and the justification for the invasion was far stronger.’’

Prosecutors hadn’t filed a response to the memorandum as of early Wednesday afternoon.

In a related matter, a hearing that had been scheduled for April 12 in Kraft’s closely watched case was canceled. The online court docket noted that Judge Leonard Hanser will be “out of session’’ on that date, records show.

An alternate date hadn’t been scheduled as of Wednesday afternoon.

Separately, Kraft and 15 other men are asking the courts to seal the video recordings, a request that is being opposed by multiple news organizations under Florida’s public records law. 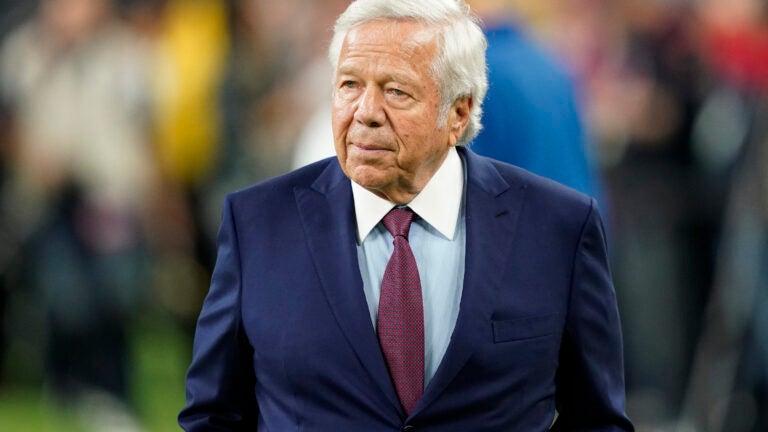