Eight-year-old Ryan Feeney hopped out of his seat as soon as he saw the guest of honor walk into the ballroom for the annual Make-A-Wish Gala at the InterContinental Hotel Saturday night.

“Gronk!” Feeney called out, scurrying his way over to greet newly retired Patriots tight end Rob Gronkowski, who had just entered the room arm-in-arm with girlfriend Camille Kostek. Gronkowski, in a tan suit, and Kostek, in a taupe gown, paused their walk to their seats to briefly say hi.

Feeney had previously met Gronkowski in September 2017, when the three-time Super Bowl champion made a surprise appearance at the unveiling of a Patriots-themed backyard football field at Feeney’s home in Melrose. Make-A-Wish Massachusetts and Rhode Island had organized the fun-filled day for Feeney, who was born with a genetic disorder and underwent below-knee amputation on his right leg when he was two years old.

Several scenes from the day were later shown during Saturday night’s gala, as part of a tribute video thanking Gronkowski for his regular involvement with the Make-A-Wish Foundation. During his nine-year career, Gronkowski helped grant 14 wishes, including Feeney’s. For all of his contributions, the 29-year-old was honored Saturday with the 2019 Wish Hero Award.

“To know that of all things that a kid could choose to do, it’s a very, very humbling experience to know that these kids choose to meet me,” Gronkowski said.

Upon receiving the award, Gronkowski was escorted to the stage by Feeney as well as 19-year-old Jordyn Summerlin and 21-year-old Cole Salmi. Ozzy Osborne’s “Crazy Train,” often the song blasting through the Gillette Stadium speakers when the Patriots first take the field before a game, fittingly played in the background.

Once at the podium, Gronkowski began his acceptance speech by thanking the Kraft family, particularly Dan Kraft — one of Robert Kraft’s four sons who had served on the board of directors for the Make-A-Wish Foundation. As Gronkowski stressed the importance of giving back to the community, he recalled a visit to Boston Children’s Hospital for his first community event as a member of the Patriots. And in typical Gronkowski fashion, he couldn’t help but crack a joke.

“It was an eye-opening experience to see what the children were going through, yet they all still managed to smile when my teammates and I came into the room,” Gronkowski said. “And I’m sorry, Camille, the moms got a little bit frisky, too, when I walked in.”

The room of approximately 500 attendees burst into laughter, while Gronkowski flashed a grin and gave a little wave. As his speech continued, so did the laughs.

“Midway through my first season, the Make-A-Wish Foundation came to Gillette Stadium with a couple of kids who wanted to meet,” Gronkowski paused before playfully rolling his eyes, “Tom Brady.”

“As soon as the kids saw Tom, their faces lit up, which how could you not when looking at the beautiful Tom?” he continued.

Gronkowski closed his remarks by jokingly inviting Feeney to spike the microphone, which was, of course, met with laughter. More chuckles followed when he proceeded to tuck his trophy under his arm like a football and pretend to juke an attendee.

Later in the program, Gronkowski returned to the stage to help auction off a VIP package of four tickets to a regular-season Patriots game.

“These seats are fantastic,” Gronkowski said before turning to his girlfriend. “Camille, aren’t they?”

After the winning bid of $13,000 was made, the future Hall of Famer went over to pose for a photograph before dipping out with Kostek.

What the future holds for Gronkowski is still very much unknown, but one thing’s for certain: He’ll be joining some of his teammates for the slew of festivities set to take place at Fenway Park on Tuesday afternoon. During the bidding for the second auction item of the night, four tickets to the Red Sox’ home opener against the Toronto Blue Jays, Gronkowski shouted, “I’ll be there!” on his way out.

Rob Gronkowski was escorted to the stage by wish kids Jordyn and Cole before receiving an award.

Rob Gronkowski received an award during the Make-A-Wish Gala.

Rob Gronkowski puts his trophy under his arm like a football. 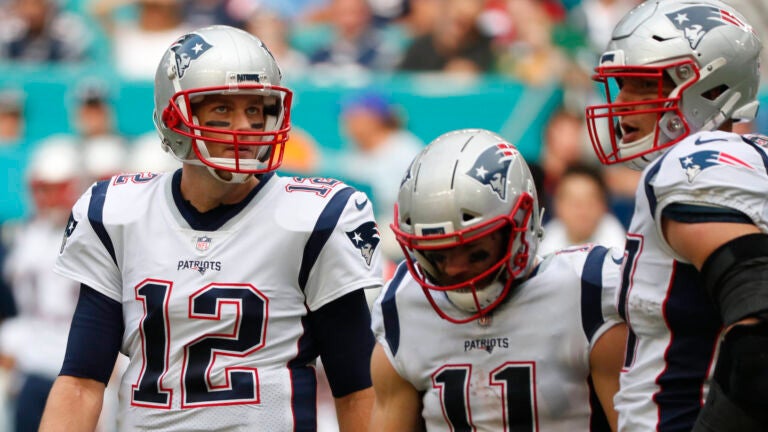