Rob Gronkowski’s last impression on the New England Patriots might have been on the Lombardi Trophy itself.

The Patriots visited Fenway Park to celebrate their Super Bowl championship at the Red Sox home opener on April 9. During the Sox’ World Series ring ceremony, the Patriots players huddled, hidden, in a tent in the corner of left field as they waited to throw out the first pitch.

The players involved detailed what happened next to Patriots.com’s Angelique Fiske.

As cornerback Jason McCourty said, “You knew something was going to go wrong when you hand out the six Lombardi trophies, especially one to Rob Gronkowski with idle time.”

The Patriots decided they needed to practice their fastballs ahead of the first pitch, so they started throwing against the side of the tent. Gronkowski’s warm-up toss nearly went clean through the canvas. It wouldn’t be the only damage done before the tight end left the tent.

.@RobGronkowski left a mark on this organization.

And on the sixth Lombardi. pic.twitter.com/t5IVTyCXcA

Julian Edelman decided he needed a batter to step up to the imaginary plate so he could practice his accuracy. Enter Gronkowski, empty-handed but not for long. He picked up the Lombardi Trophy. Not a replica, not one from last decade that might have lost some of its luster already. The silverware earned in February at Super Bowl LIII.

Some of the assembled players were confident Gronkowski wouldn’t actually try to hit a baseball with such a valuable bat. Offensive tackle Cole Croston knew his teammate better.

“If it’s Rob and he’s standing up there with the trophy, he’s not going to not hit that ball that Julian’s throwing,” Croston told Patriots.com. “He’s definitely going to hit it. Julian isn’t throwing it real soft. He’s throwing it pretty hard.”

Edelman threw a pitch right down the middle. Gronkowski squared up the trophy and laid down a bunt.

“It was perfect technique. I don’t even understand how he controlled the Lombardi,” safety Duron Harmon said. “If the Red Sox had bunting practice, that would be teaching tape for them.”

The various players described the sound of ball hitting bat as “ding,” “doink,” “doot,” and tink.”

Edelman and Gronkowski reportedly offered to take the cost of repairs out of their paychecks. The other players noted they were happy it was a Super Bowl MVP and a future Hall of Famer to blame instead of them. The Krafts, who own the team, were “very receptive” after getting over the initial shock of the incident.

Gronkowski announced his retirement in March.

“I love that’s how he ends it,” center Ted Karras said. “It’s going to go down in sports lore: The dent in the Lombardi from Gronk and Edelman.” 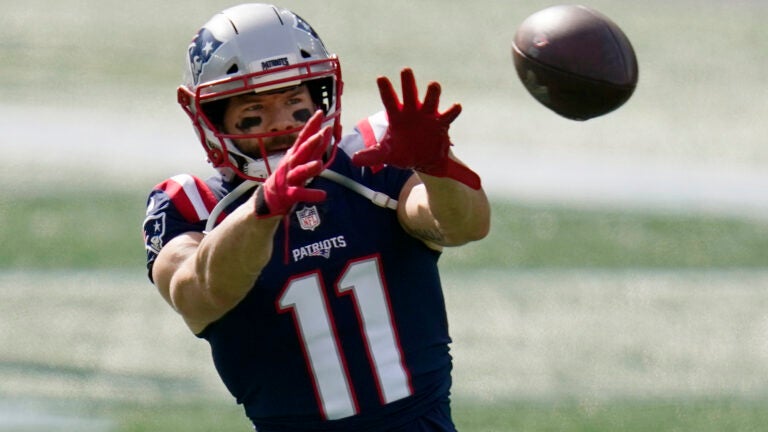