No, Tom Brady wasn’t frustrated on the Patriots’ bench Sunday in Miami against the Dolphins. The 42-year-old quarterback only appeared to be mad. Instead, he was just dealing with the heat.

“No, not at all,” Brady told WEEI’s “The Greg Hill Show” in a Monday interview about if he was angry during the game. “I was just hot, and I was just trying to not burn any energy whatsoever and we were just sitting right in the sun.”

“Man that was as hot a game as I can ever remember,” Brady said. “I think it was like 103 heat index or something like that. That was pretty intense, but our team fought through it.”

The 43-0 final score was indicative of both how much the Dolphins are struggling and how dominant the Patriots have been so far in the 2019 season. The difference between the two teams was even reflected in the attendance at Hard Rock Stadium.

“It was mostly a Patriot crowd, so it was pretty sweet,” Brady noted. “They didn’t have as many as they typically have. It was great to have the support down there.”

Brady spoke about a range of topics in his Monday interview. Here’s a look at a few of his responses:

How Antonio Brown performed in his first Patriots game

“I thought he did a great job,” said Brady of newly-signed receiver Antonio Brown. “To come in on a short week and then to establish a role for himself. It’s easy to see why he’s been an All-Pro. Just having one game under our belt together, there’s a lot of things I learned and he made a great catch on the touchdown and got us going early in the game.”

Brown made four catches for 56 yards and a touchdown.

Brady noted that the receivers as a whole performed at a high level, which is a good sign for the season.

“I thought all the receivers played really well,” Brady explained. “The nice part was we spread it around to a lot of guys. We saw a lot varieties of different coverages and looks. I think that’s the way it’s going to go all season, so whoever’s number is called is going to have to make the play.”

One Patriots player who struggled on Sunday was kicker Stephen Gostkowski, who missed a field goal and two extra point attempts.

Gostkowski was critical of himself in the postgame, saying that it was “pretty terrible on my part.”

“He’s fine. Every person misses a throw, or misses a tackle, or misses a kick, so he’s very mentally tough,”said Brady. “He kicked a game-winner in the Super Bowl. He’s got a lot of confidence in himself. I’ve been around him for a long time, so he’ll just keep trying hard like he always does.

“He had a great game against Pittsburgh,” Brady pointed out, “and we all want every game to be perfect, but this is a game of skill and it’s hard to do. Everyday is not going to be your best day. That’s just the way football is.”

Dealing with the sweatiness of centers

A humorous story that the WEEI hosts brought up was a recent article from Nick Underhill of The Athletic in which Brady was asked about how he deals with receiving the snap from a center who sweats a lot during the game.

The term “swamp ass” was used, and it drew a laugh from Brady.

“It’s a very unique article that I was asked about,” Brady joked. “It’s actually not always the best thing to think about or have fun with. We go to pretty good lengths to keep the centers from just sweating all over the ball and the hands and their hands and so we do the best we can do. Yesterday was pretty tough.”

Brady elaborated on the methodology of going to “great lengths” to prevent the centers from sweating too much on the football. The team uses a towel that actually goes down the center’s pants.

“It’s kind of like a wristband for your butt,” said Brady. “It soaks up the sweat, and then we swap it out and put some baby powder down there to try and dry out some of the sweat. It actually works really well and I’m surprised more people don’t do it, because so many quarterbacks ask me, ‘What do you do? It’s so hard.’

Brady reflected on the worst-case scenario of a sweaty center.

“I dealt with it a lot in college, and all my centers sweated,” Brady recalled. “Oh, it was terrible. The sweat would just splash in your face when you’d take the hand-off.”

Playing late in the game against the Dolphins

With the Patriots leading by several touchdowns late in the fourth quarter, Brady and the starting offense remained in the game on Sunday. It was a move that drew questions in the postgame, and Brady was about it again in the WEEI interview.

One part of Brady answer included citing the improbably loss that the team suffered in Miami a season ago, when Dolphins running back Kenyan Drake scored on a desperation play with no time remaining.

“We talked about 60 minutes of football because [of] the history down there. Last year, like we said, it took all 60 minutes and we didn’t close it out,” Brady explained. “We talked all week about it being a 60-minute game. So that was just a good way to finish. We scored on offense, got an interception on defense, and all of this early in the year, we’re trying to improve. I wouldn’t say we’re in midseason for him. We still have a lot of work to improve, so the more reps we get, the better it is for all of us. We got a lot of football to go.”

Responding to questions about a perfect season

Given the dominance of the team’s first two wins (by a combined score of 76-3), Brady was asked about the possibility of a perfect season. The Patriots infamously completed a perfect regular season in 2007, only to lose to the Giants in Super Bowl XLII.

The final topic of the interview with Brady was on a lighter note. Monday, Sept. 16 is National Guacamole Day. Brady, who is famously specific with his diet, offered a surprising answer.

“That’s a favorite food of mine,” said the founder of the TB12 Method. “I enjoy my guac, so I think we should celebrate. I’m definitely going to have some guac tonight.”

Asked exactly how he likes to eat his guacamole, Brady gave a more predictable response.

“I’m not a big nacho guy,” Brady noted. “If I’m getting my guac, I’m getting it more on tacos or fajitas.” 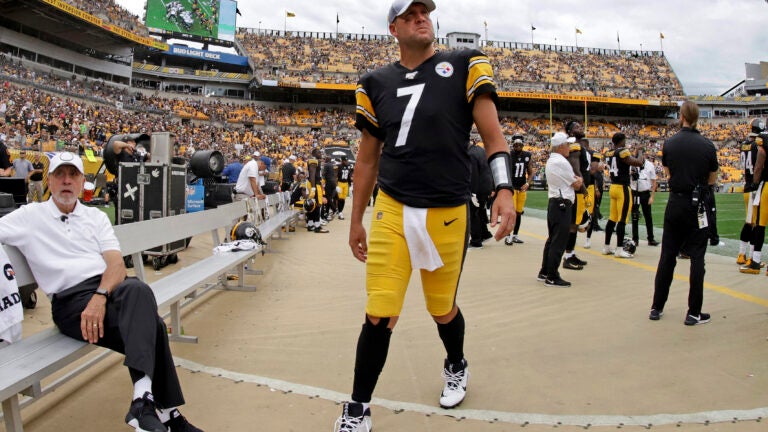 Ben Roethlisberger is done for the season with right elbow injury