Thirty thoughts on the Patriots’ 30-14 win over the Jets …

1. The final score doesn’t look like a blowout. Those who bet a few coins on the Patriots (favored by 21 points last I saw) can’t even look at it as a win. But make no mistake: That was a blowout, a thumping, a dismantling. In other words, save for the misleading final score, it was about what was expected.

2. The Patriots led 20-0 early in the second quarter, and it felt like they left points on the field. The Jets weren’t coming back if they played five quarters, they were allowed to use 12 players on offense, and the Patriots had agreed to punt on third down the rest of the way.

3. The best Patriots defense I’ve seen during the Belichick era over a full season is the 2004 unit. But this might be the best defense I’ve ever seen over a four-game span, including the Super Bowl in February. The skill and depth is extraordinary at all three levels.

4. The Patriots have allowed a total of 597 yards through three games. That’s fewer yards than their offense tallied in the Super Bowl LII loss to the Eagles (613). And of course, they’re yet to allow a defensive touchdown.

6. Collins, traded midway through the 2016 season to Cleveland, has been remarkable upon return. He has every ounce of the ridiculous physical ability that he had as young player, but at age 29 seems to have the maturity to maximize that talent.

7. Collins had six tackles and two sacks Sunday, and now has 19 tackles (five for a loss), 2.5 sacks, and 2 interceptions (both last week against the Dolphins). Three games into this thing, and he’s playing like Andre Tippett circa 1984. 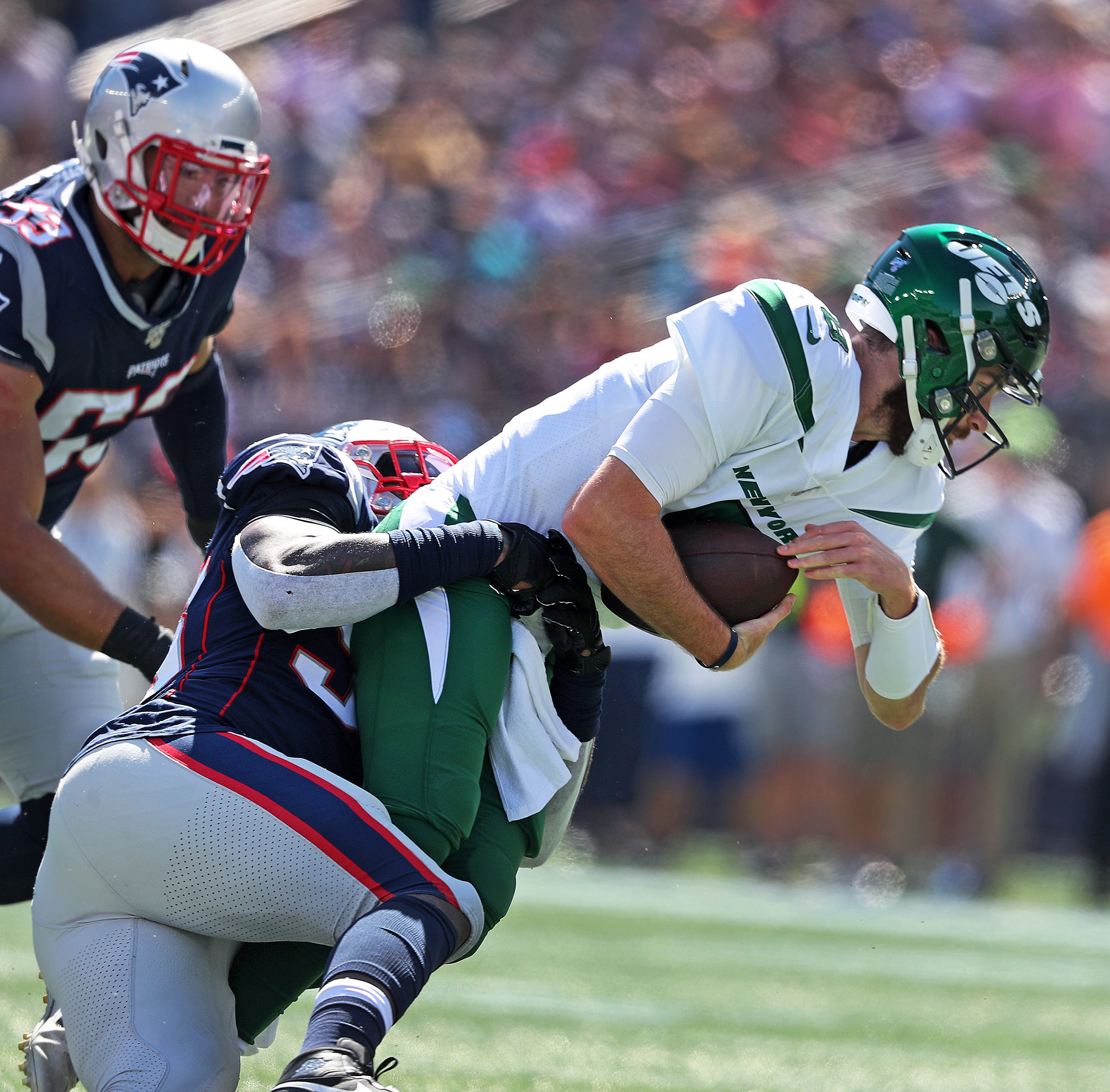 Jamie Collins sacks Luke Falk (8) in the first quarter. Collins had two sacks in the game.

8. If Collins was the star of the game defensively, the honor on offense probably goes to Josh Gordon. He had 6 catches for 83 yards, including two absolute doozies – a leaping grab for 28 yards with a defender draped all over him, and another in which he caught the ball on the ricochet over the middle while falling to the turf.

9. He did have a couple of miscommunication issues with Brady – five passes in his direction fell incomplete, and he seemed to be a half-step from where Brady expected him to be a couple of times. But that just serves as a reminder that he is playing pretty close to brilliant football despite being reinstated to the league just over a month ago.

10. It is a joy to watch Gordon play, and knowing what he’s gone through in his life, we can only hope it continues to go as well as it right now. This guy, unlike another superstar receiver who was here for a tumultuous 11 days, is so easy to root for.

11. When you’re playing a subpar team, the two goals are generally to win with high-level execution and without suspense and escape unscathed. The Patriots pulled off the first part, but they took a few concerning lumps along the way.

12. Edelman didn’t return after reportedly injuring his ribs, while Hightower appeared to suffer a shoulder injury. Gordon had a couple of fingers taped up but returned, and Adam Butler – who along with Danny Shelton is one of the unsung standouts on this defense so far – left with a foot injury. Attrition is just about the only thing that can prevent this team from achieving its greatest goals.

Julian Edelman was the Patriots’ leading receiver despite missing the second half with a rib injury.

13. Tom Brady was excellent and cruelly efficient as usual, completing 28 of 42 passes for 306 yards and 2 touchdowns. Yet there is plenty for Brady, Belichick and Josh McDaniels to work on, lost opportunities worth lamenting. The offense hit a rut after building the big lead, and it was especially inconsistent after Julian Edelman went out with what appeared to be a rib injury late in the second quarter.

14. Sony Michel scored the first touchdown on a nifty 6-yard run with just under 8 minutes left in the first, but it did not portend a big day. Michel had just 11 yards on nine carries, the second game this season he’s finished with under 15 rushing yards.

15. It’s tempting to ask what in the name of Vagas Ferguson is going on here with second-year back and 2018 first-round pick, who had six touchdowns in the postseason last year. He’s averaging just 2.4 yards per carry this year, with 108 yards on 45 carries.

16. But we know there are variables at play here – fullback James Develin was out Sunday, and 40 percent of last year’s starting offensive line has changed. He did not have a lot of room to maneuver Sunday. But he’s not getting any yardage after contact, either. He needs to be better, and he will.

17. If not for Gordon’s two phenomenal catches, the most fun play of the game might have been one that came in the first two minutes. Tight end Ryan Izzo slipped into a pattern after blocking, got a nice block from Michel, and rumbled 41 yards deep into Jets territory.

Related: How the Patriots kept the Jets grounded

18. All right, I’ll admit it: The Stephen Gostkowski misses are starting to become … well, not a problem, yet, but certainly concerning. I’ll always defend him as an underrated Patriots who has never gotten credit for his reliability because of the legend he succeeded. But three missed extra points in two weeks is unacceptable.

19. Most predictable development of Sunday’s game, other than the outcome? Brady going right back to Edelman late in the first quarter on the play after No. 11 dropped a throw that hit him right between the 1 and the 1. And of course Edelman caught it for a first down.

20. Anyone who thought Phillip Dorsett was in danger of not making the roster, raise your hand and admit your shame, and maybe we’ll forgive you. Dorsett had six catches for 53 yards and the game’s second touchdown Sunday. I’m going to keep comparing him to David Patten until you agree with me.

Phillip Dorsett is in Tom Brady’s circle of trust.

21. Dorsett is a quintessential Patriot, doing his job well and without complaint, no matter how his role may vary from week to week. He entered that Brady circle of trust last season, and he earned his place by pretty much catching everything Brady threw to him.

22. That’s not an exaggeration. Dorsett’s remarkable regular-season streak of catching his last 24 targets ended Sunday, and it came on a play that actually looked like a catch, though a Patriots challenge went unrewarded. I kind of wondered whether Belichick challenged the call just to help keep Dorsett’s streak intact.

23. He’s a cool story, but I’m not yet sold on Gunnar Olszewski as the punt returner. His muffed punt in the third quarter was recovered in the end zone by the Jets for the first touchdown scored against the Patriots since the AFC Championship Game. He averaged just 5.5 yards on eight returns Sunday despite having some room to operate in a couple of cases.

24. Braxton Berrios, cut by the Patriots in camp, led the Jets in receiving yards with … 29.

25. I think we all figured Brady’s first two completions would go to Brandon Bolden, right? Brady hit Bolden for 10 yards, and then 11 more, on the Patriots first two plays from scrimmage.

26. As the media columnist, I’ve probably heard complaints from readers about every play-by-play voice ever to call a Patriots game. But I can’t fathom how anyone would ever have a gripe with Kevin Harlan, who called Sunday’s game along with Rich Gannon. He has genuine enthusiasm, a big-event voice, and does a ton of homework.

28. Brady has a chance to put a little distance between himself and injured Saints quarterback Drew Brees in the all-time passing touchdown race. With two Sundya, Brady now has 524, two more than Brees, and just 15 fewer than all-time leader Peyton Manning.

29. Cooler still, Brady is closing in on 600 for his career with the postseason included. He has 73 touchdown passes in the playoffs, putting him at a total of 597 in his career. Including the playoffs, Manning had 579 total passing touchdowns, throwing 40 in 27 playoff games, with 25 picks.

30. I’m pretty sure new Hall of Famer Ty Law, honored at halftime of Sunday’s game, had at least 15 of those interceptions. (OK, it was just five. He intercepted Manning nine times total.)