Through six weeks, the Patriots defense has been on a historic pace across multiple statistical categories.

Flipping the script on some of the previous versions of the team during the Tom Brady era, it’s been the defense that’s carried New England to a 6-0 start. From a dominant line all the way back to a veteran group of safeties, the Patriots’ defense has talent in all sectors.

Given the defense’s tangible dominance of the first six weeks of the season, it’s largely been hailed as a masterpiece of the Bill Belichick era. Look no further than Tom Brady.

“The way our defense is playing, as long as we don’t turn the ball over, we know we have a great chance to win because they are playing as well as any defense I have ever played with,” Brady told WEEI’s “The Greg Hill Show” earlier in October. “It is really spectacular to watch from the sideline.”

It’s high praise from Brady, who usually refrains from saying too much. And as this is Brady’s 20th season in the NFL — a time that includes some pretty solid Patriots defenses — it’s a noteworthy quote.

“Over the course of the night, what you saw was a defense that is not only athletic and has a sense of togetherness, but also uses its considerable smarts to anticipate what’s headed its way and counteract it,” Freeman wrote after New England’s victory over New York. “To be blunt, this is one of the smartest defenses I’ve ever seen.”

At this current pace, the Patriots would eclipse achievements made by one of the greatest defenses in NFL history: The 2000 Ravens.

“The quality of the opposition has played some role in New England’s dominance,” wrote NFL analyst Gil Brandt, “but even so, the Pats are on pace to finish 2019 with 128 points allowed over the course of the entire season, easily surpassing the 2000 Ravens (165 points allowed) as the stingiest defense since 2000.”

Despite its fantastic start to the 2019 season, not everyone is sold. While much of the football world has nothing but praise for Belichick’s defense, a few questions remain. As Brandt alluded to, the most common critique of the Patriots’ defense so far isn’t a measurable weakness in any of its work, but simply the strength of schedule — or lack thereof — so far this season.

Of New England’s first six opponents, only the Bills currently hold a winning record. In an article describing the difficulty of predicting defensive performance, FiveThirtyEight’s Josh Hermsmeyer used the Patriots as an example.

“Rather than capturing the strength of a team’s defensive unit, our metrics and stats may mostly be measuring a team’s strength of schedule,” Hermsmeyer posited.

“Taking this view,” he continued, “the Patriots’ defensive performance is perhaps best attributed to the inept offensive performances of their opponents: the Steelers with an aging Ben Roethlisberger and newly without Antonio Brown; the tanking Miami Dolphins in a 43-0 blowout; a Jets team led by quarterback Luke Falk because of Sam Darnold’s bout with mononucleosis; and a narrow win over the Bills without a concussed [Josh] Allen in the fourth quarter of Week 4.”

In other words, the Patriots really haven’t been tested yet by a quality offense.

Still, the defense has been especially prolific against the competition thus far in 2019, much to the delight of fantasy football players.

Anyone who’s had New England’s defense in fantasy has witnessed an unusual eruption from that position. Currently, the Patriots defense is a top-15 scorer across all of fantasy football, even though a team defense usually ranks no higher than 50th.

“It’s difficult to find historical numbers for fantasy defenses, but it’s almost assured that the Pats D/ST is off to one of the best starts ever,” noted The Ringer’s Riley McAtee. “I for sure have never seen anything like it.”

And in purely measurable terms, New England has been exceptional, though more difficult match-ups are to come.

“They are the only team to allow fewer than six yards per targeted attempt (5.8), the only team to allow a passer rating below 65.0 on targeted passes (46.1), and their 14 interceptions are five more than any other team,” said Ben Linsey of Pro Football Focus, ranking the Patriots as the top defense in the league. “It will be interesting to see them compete with a competent passing attack, but they have all the makings of a dominant secondary and defense overall.” 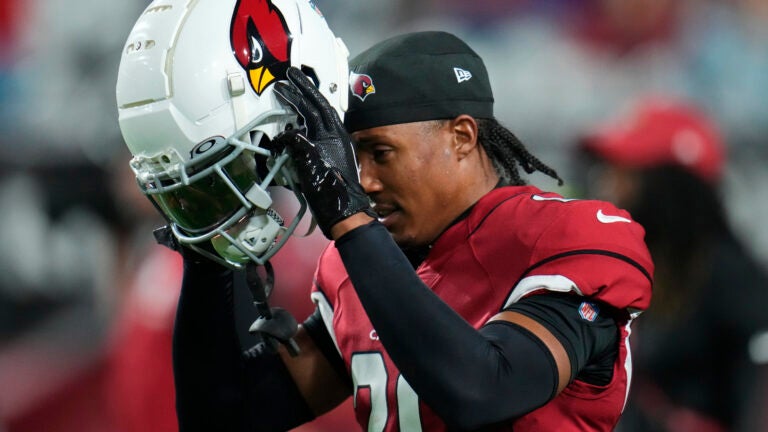