According to Scottish folklore, the boogeyman lurks underneath the beds of children, terrorizing them into behaving, and haunting their dreams.

If Salem has tales of witches and Boston is said to have the spirits of Samuel Adams and Paul Revere lingering in Granary Park, then Foxborough has its own scary sight that wreaks havoc on opponents, haunting young quarterbacks into “seeing ghosts.”

The nickname has been fitting. New England is currently leading the NFL in almost every defensive category, including interceptions (18), opponent scoring drives allowed (5), offensive points allowed (27), takeaways (22) and opponent yards per play (4.0).

Here’s how the Patriots’ scary nickname came to be.

It’s unclear which Patriot coined the nickname “The Boogeymen.” But the phrase officially came into use following that Oct. 6 game against the Redskins, a game in which New England racked up 3.5 sacks, 6 tackles for loss, and 5 quarterback hits, and a forced fumble.

“We want to go out there, we want to be the engine and the starting force of this defense,” Hightower said then. “We know that if we go out and we play well, it’ll hype every other spot.”

If the boogeyman is a “shapeless personification of terror,” then what else perfectly describes just how versatile and menacing the Patriots’ defense has been?

The results have been impressive. Against the Dolphins, intercepted passes-turned-touchdowns became the norm. On one play, Collins snagged a pass that slipped from the hands of running back Kalen Ballage, taking it 69-yards to the end zone for a touchdown.

The unit shined against the Bills, showing both athleticism and skill. Collins leapfrogged over the line to block placekicker Stephen Hauschka’s kick. Then, late in the game, Van Noy made a huge hit on quarterback Matt Barkley to force a pass that was intercepted by Collins. The Patriots defeated the Bills 16-10 and Van Noy finished the game with eight tackles, two sacks, a QB hit, and two forced fumbles. He was honored with his first AFC Defensive Player of the Week.

After the blowout win over the Redskins, the nickname seemed fitting, and ensued some giggles from teammates.

“I’m going to continue to make fun of them for that,” Devin McCourty said about the nickname, adding that the DB’s don’t have a fun name yet. “We just play football man.We got a lot of guys born in the eighties, we’re not into all that.”

More stellar performances ensued. Against the Giants, Winovich snagged an interception off of a blocked punt by Brandon Bolden and scored his first career touchdown. In the fourth quarter, Collins forced a fumble and Van Noy scooped up the ball and ran 22 yards into the end zone for his own touchdown. The Boogeyman had come to play.

In Week 7 against the Jets, “ghosts” haunted MetLife Stadium. The Patriots crushed the Jets 33-0, the defense snagging four interceptions, a sack, and earning their highest blitz rate of the season so far of 48.5.  Darnold, who threw those four pickss and lost a fumble, admitted that he was “seeing ghosts”  while mic’d up on the sidelines.

He later clarified that his comment came from an honest reaction that he “needed to see the field a lot better”.  Unfortunately for him any chance of doing so was halted by the the “Boogeymen”, who hit him so often, he lacked control of where he was throwing.

Safety Duron Harmon elaborated on how the defense gets it done:

Devin McCourty’s  fifth interception of the season was described in spooky-fashion by The Ringer’s Danny Heiftz:

“On the Jets’ second snap of the game Darnold realized the Patriots were sending an all-out blitz. He screamed to his offensive line to change their protection. They did not hear him (classic horror movie). Patriots linebacker Jamie Collins ran into the backfield unblocked. Darnold panicked and made a dumb decision (also classic horror movie), floating a ball that was picked off by Pats safety Devin McCourty.”

In the words of Van Noy, the “Boogeyman” was “real”.  Darnold’s “seeing ghosts” comment showed that the forces haunting opponents were dressed in red and navy, ready to obliterate their offense.

“… that’s the Boogeyman for real. … He really said that? That’s crazy.”

Kyle Van Noy’s reaction to finding out Sam Darnold said ‘He was seeing ghosts’ against the Pats defense. pic.twitter.com/UNKWbysSd8

For Hightower, Darnold’s comment was as funny as it was “humbling”:

“Humbling, very humbling,” Hightower told ESPN. “It feels good, obviously it’s something that we do on the inside, outside linebacker. Whenever you can have fun with something like that, and continue to build on it, it’s cool. I think that’s pretty dope.” 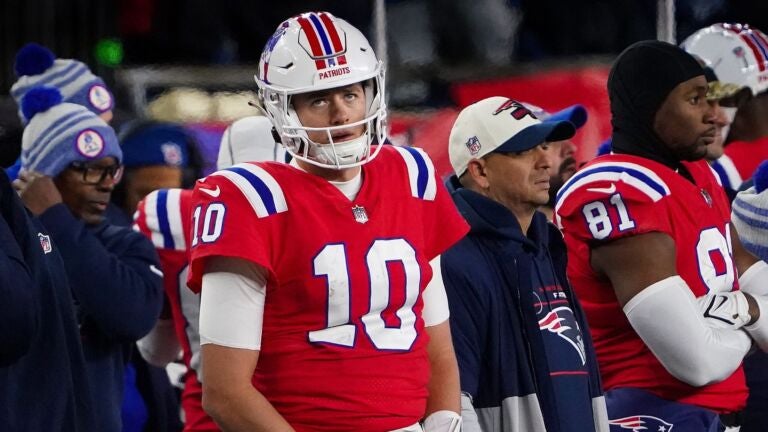