FOXBOROUGH — Patriots linebacker Ja’Whaun Bentley sort of crinkles his nose when I say the word “friendship.’’

It’s not the preferred term to describe his relationship with Celtics rookie Carsen Edwards.

“That’s my brother,’’ Bentley says. “We were never really friends. We were always brothers. Everybody else says ‘friends’. We say ‘brothers.’ ’’

From there, the pair started hanging out more and more. They overlapped at Purdue for two years before Bentley graduated and was drafted 143rd overall in the fifth round of the 2018 NFL Draft. When Bentley left Purdue, however, his connection with Edwards didn’t fizzle.

Bentley has continued to return to campus in West Lafayette, Ind., including a surprise visit for Edwards’s 21st birthday this past March. A few months later, he also made a trip out to Texas to watch the NBA Draft with Edwards in his hometown.

Knowing Bentley, who played only three games last season before getting placed on season-ending injured reserve with a torn biceps, had a busy recovery schedule ahead of training camp, Edwards cherishes the memory as one of his favorites.

“For him to make it out and be there for a moment like that, it meant a lot,’’ he said.

For Bentley, though, the gesture was a given.

“That was definitely a top priority for me to be down there,’’ he said. “It was nothing for me to come out there.’’

Together, alongside family, they watched NBA deputy commissioner Mark Tatum call out the 33rd overall pick: the Philadelphia 76ers had chosen Edwards. Only the selection actually belonged to the Celtics, who acquired the pick in a trade earlier in the night.

“I definitely remember after they said I was going to the Celtics, we were just sitting there and I kind of looked at him,’’ Edwards recalled. “Ja’Whaun is so low-key. He’s a dude where he wants the day to be about me. So, after it all happened, he didn’t really say much.

Now professional athletes in the same city, the two have only continued to strengthen their bond. They do what friends do: talk about the highs and lows, try new restaurants, shop, and chill at each other’s apartments. (Bentley even spent the night at Edwards’s place earlier this week.) Navigating his first year in the league, Edwards has also turned to Bentley for advice.

“His mind-set was something we always talked about, how he works hard and things like that,’’ Edwards said. “It’s cool to follow somebody that has the same dreams in a way. He was like that at Purdue as well. He was low-key but worked real hard.’’

They know more about each other than most. When Bentley flashed his impressive vocals at teammate Duron Harmon’s karaoke charity event in September, for example, Edwards wasn’t surprised.

“Ja’Whaun and I will be in the car, singing and stuff, messing around, and he’ll sound really good,’’ Edwards said. “I’ll always be like, ‘Bro, you understand you sound really good?’ That’s one thing he’s real shy about, but he can really sing.’’

Despite their demanding schedules, they’ll support each other at games whenever they can. Bentley attended the Celtics’ season opener at TD Garden, and was in the house for Boston’s game against the Knicks a week later.

Edwards went to both preseason games at Gillette Stadium as well as New England’s Week 3 contest against the New York Jets. Although Edwards couldn’t make the Week 8 matchup against the Cleveland Browns, his parents braved the rainy weather to support Bentley, who talks to Edwards’s older brother, Jai, on a daily basis, too.

They’ll still make cross-country trips for the right occasion — Bentley flew out to Las Vegas to watch Edwards ball out during Summer League in July — but having each other nearby goes a long way. Edwards’s family still lives in Texas, while Bentley’s resides in Maryland.

“It’s helped me a lot, especially coming to a city by myself,’’ Edwards said. “It helped my mom, too. She doesn’t like that I moved out here by myself and things like that.’’

“There’s nothing like having family that’s closer,’’ added Bentley. “It’s a God thing. God knows who to put in your life.’’ 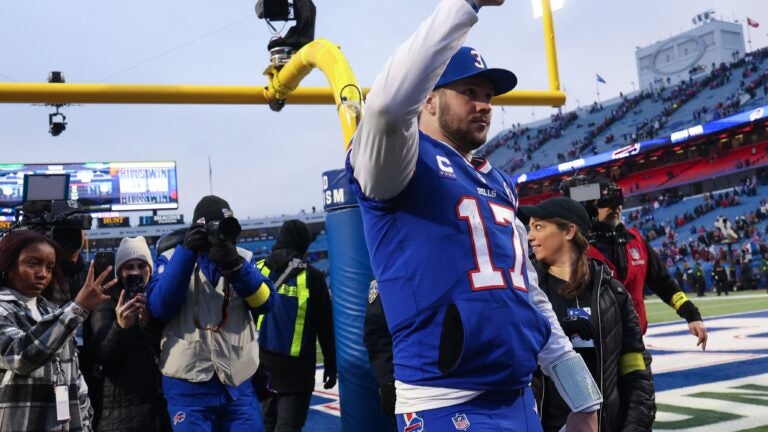 Football America was hoping Patriots would quit against Bills, but they didn’t, and that should count for something