Former Patriots tight end and current FOX analyst Rob Gronkowski said on air before the Patriots defeated the Cowboys Sunday that Brady should have been more content with solidifying another win the week before.

“He’s so frustrated,” Gronkowsi said, citing Brady’s dour press conference following last week’s win over the Philadelphia Eagles. “It’s like, ‘Yo, you guys are 9-1.’ That’s the one part I don’t miss about being there. Hands down, I’m not going to lie. I don’t miss that. They’re frustrated. They’re 9-1. They win a game against Philly last week. We lost to them two years ago in the Super Bowl. They should be happy. Instead, you’re sitting there Sunday night like, ‘What did I do wrong?’ No, that’s not the feeling you should have. You should be pumped about the win. Yeah you might not have put up the big offensive numbers that you put up but you won the game. Enjoy it, go out the next week and build off of it.”

On Monday, Brady responded to Gronk’s criticism on WEEI by explaining that he handles things “differently”.

“I think everyone deals with things differently,” he said. “I think that was part of having a guy like Gronk in the locker room that was so great was he approached it like he does,” Brady said. “He always looks at the bright spots in everything. When you have great attitudes like that, it is good to have. He was a great player for us for a long time. We have different challenges that we face, and for me personally, I don’t have one emotion after every game. There’s probably five or 10. The moment you catch me is how I will feel at a particular time and sometimes it takes time to digest things and deal with things. Hopefully we can process those by the time the preparation for the next week starts.”

He even said that his demeanor is a result of his own high expectations.

“I have a job to do,” he said. “I think my job, it’s very important to me. I want us to do as best we possibly can each week, like I always have. Everybody puts a lot into it and you want to see a great performance. When it’s less than that I don’t know what I should feel other than what is authentic to me and what is authentic to my own personal feelings and beliefs about how we should be performing and what we need to do in order to do better.

“I have 20 years of experience, so I feel like I have some knowledge. I don’t have all the answers, but I have been around long enough to know what it looks like. I think our guys are trying. We have good attitudes and we work hard. We have a very good team. I think our team will improve as we on offense improve. I think we can do that by — again, it comes down to trust, and dependability and consistency…Hopefully we can reach a higher level.”

Visit 5 questions ahead of the Patriots' preseason game with Carolina 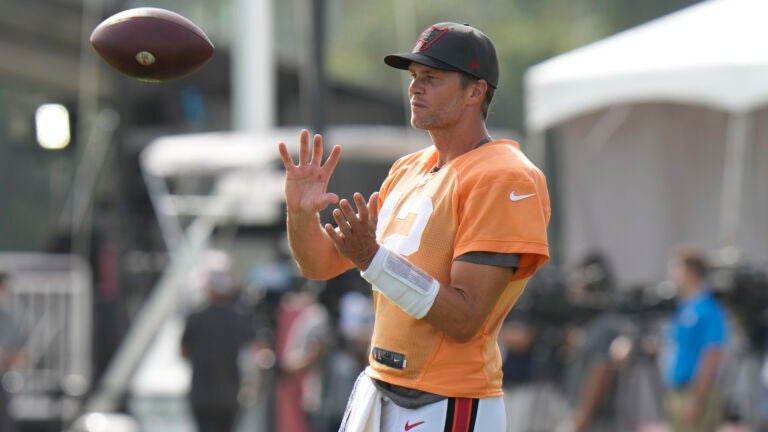