“It was a grind, day after day after week after week, year after year. It was a lot of blood sweat and tears. Nick was right there too doing it with me.”

These are the words from Patriots head coach Bill Belichick about the years he spent transforming the Cleveland Browns alongside current Alabama head coach Nick Saban. In the newest documentary from HBO, “Belichick and Saban: The Art of Coaching” that aired Tuesday, both coaches sat down inside Saban’s office and home to reflect on their  coaching careers and how their connection to each other influenced their success.

The pair met when Saban was coaching at the Naval Academy with Belichick’s father, Steve, whom he shared an office with. When Belichick became a head coach for the Browns in 1991, he brought Saban on as the defensive coordinator, and in their final season together they helped build a defensively-strong program that gave up the fewest points in the NFL four years later. As opponents, with Saban coaching the Miami Dolphins and Belichick the Patriots, they would face off four times in over two years and use shared tactics against each other, such as the iconic drop-kick play.

What always remained throughout their careers was their friendship. From six Super Bowls to six NCAA Championships, they both have built some of the most dominant football programs ever while maintaining a connection with one another that existed beyond the football field. They’re two men built from the same cloth.

Here’s a few things we learned about them both from the documentary:

They feel a deep bond to each other through their Croatian-heritage.

Both Belichick and Saban are proud of their Croatian roots and share that connection with each other. Belichick’s father is Croatian, and he’s visited the country multiple times. He feels that he and Saban are so similar, they could be related.

“There aren’t that many Croatians around so, somewhere along the lines we’re probably related distantly,” Belichick said. “There’s gotta be a brotherhood there somewhere, at least cousins.”

“I think there’s a lot of similarities,” Saban added. “Whether it’s coming from lineage or something else, I always thought we thought a little bit alike.”

Both knew they would grow up to become football coaches.

“My dad was a coach,” Saban said. “He coached Pop Warner, American Legion baseball. He never went to college but he was a really good coach so, the elements of all of the things that I believe in as a coach were instilled in me when I was 10 years old playing Pop Warner football. Your dad was a coach [to Belichick] and I’m sure that impacted how you grew up a little bit because some of the way that you try to get players to play with discipline, pay attention to detail, prepare the right way, best effort and all that, I was getting impacted by that every day.”

“He was just fair,” Belichick said about his father. “When I did the wrong thing he didn’t spare anything and I deserved it. I wouldn’t say it was overly harsh. I thought he was harsh on the football field – wasn’t a lot of compliments but, he made them better and he cared about them. Certainly there was some tough love there.”

Their majors in college heavily influenced their approaches to coaching.

For both coaches, their traditional approach to the game stems from what they learned in college within their respective majors. Belichick, who played center as Wesleyan, didn’t feel like his economics major has helped him specifically, but he did learn how to solve problems.

“That’s really what our job is,” he explained. “My job I feel like is there’s problems every day and what are my options, are their any variables or do I just have these options and pick the best one and figure out how to implement it.”

The film flashes to a clip of Belichick quizzing the team — including Tom Brady and Randy Moss –on scenarios and it’s evident that his calculated way of thinking has influenced his decision-making on the football field.

“If we got the hands team out there, in a situation like that, we need to be ready to what?” he asks – to which the Brady answers “Return to deep kick.”

Meanwhile, Saban was a defensive back at Kent State with a minor in sports psychology.

“That’s the thing that really spurred my interest in the mindset and the mental conditioning part of what you have to do to be successful.”

When asking his Alabama players about their work ethic on the field, he challenges them on their mindset.

The ‘Do your job’ motto originated from their time on the Cleveland Browns. It remains the core value for both of their teams.

Saban said Belichick always made his expectations clear as a coach, both to the staff and to the players.

“One of the things I liked most about working for you,” he said to Belichick, “I knew exactly what to expect [and] what you expected from me. I worked other places and that was never, ever clearly defined. It’s amazing to me how many people work with or for someone and it’s just assumed that they know what you’d like them for them to do. I thought that whether it was the players that we brought to the team, the people that worked in personnel or whatever, you defined for them and then you let them do their job.”

“We’ll be all right,” Belichick finished with a smile.

It’s not new information that in 2014, Belichick used one of Saban’s “ineligible receiver” formations from Alabama’s overtime defeat over LSU to beat the Ravens in the playoffs. In the film, Belichick took the time to elaborate on the moment and how it’s helped with his game-plan strategy.

“I watch what they do, I study their schemes,” he said. “I know that if it’s good enough for Nick and he’s doing, that it’s probably good enough for me. I think that’s something that [we] share: create an advantage with your attack on the team without doing too much that your team can’t execute that plan.”

“It’s so difficult to recognize the eligibles in that formation,” Saban explained. “Especially if you do it fast. They get lined up backwards so they don’t match the patterns right and that’s exactly what happened in our game and I think it happened later for the Patriots, too.”

Saban respects Belichick’s approach to recruitment, unlike other NFL coaches.

The film gave an inside look at some private conversations between both coaches, specifically during Alabama pro-day, which Belichick attended this past May. He can be heard asking Saban who the top player was and who he should look out for (Saban: “Jonah Williams and the defensive linemen”). 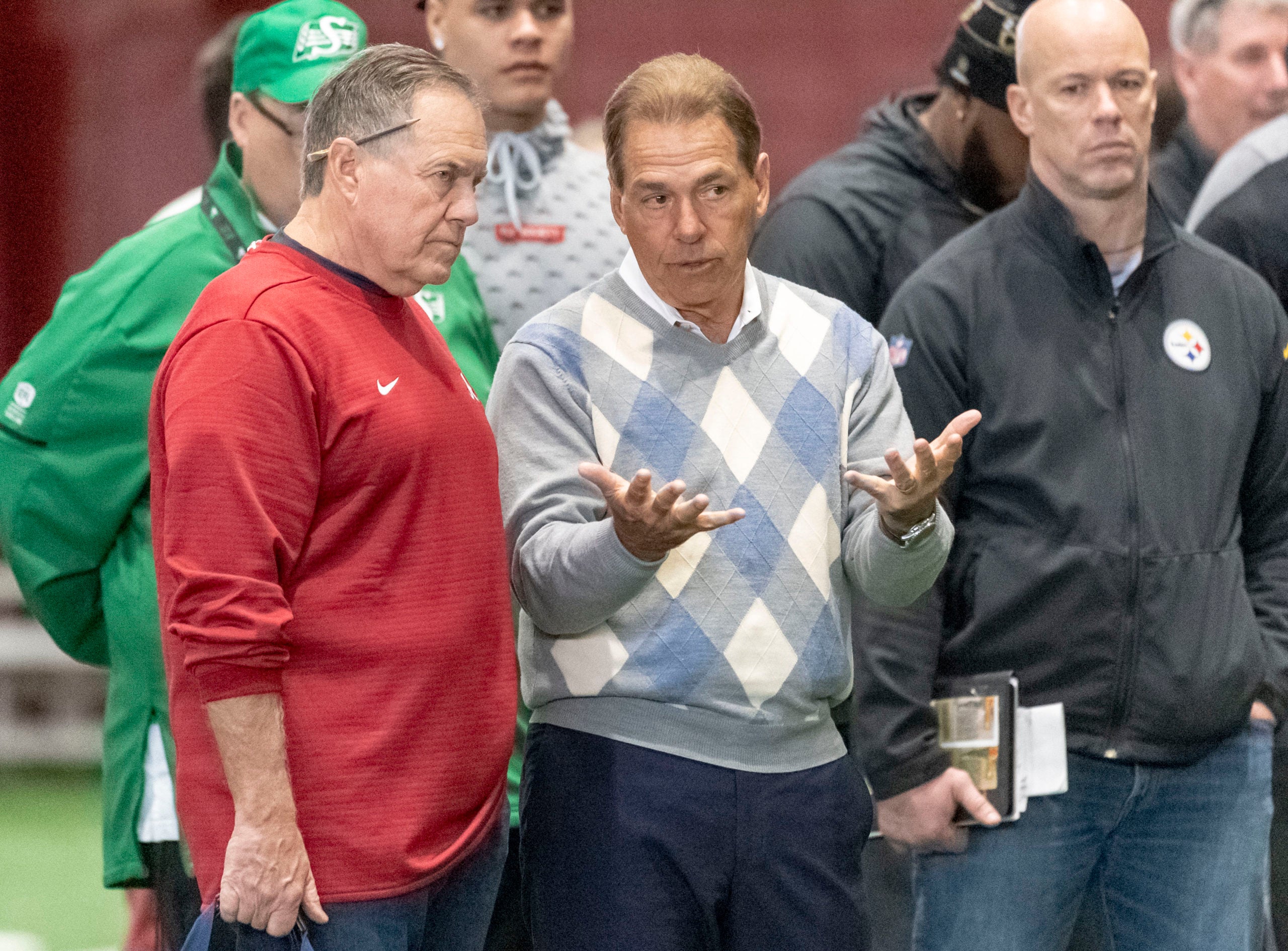 Saban said he respects the communication they have in scouting his athletes, which is not always reciprocated by other coaches in the league.

“One thing that you do that a lot of the NFL guys don’t do [is], I don’t know if you ever picked one our players that you never talked to me before you picked them. There’s a few other guys in the league that do that, but then there’s another 30 times that I never hear from, they pick somebody and I’m saying, ‘How could they pick that guy.’ Then they come back and say, ‘We didn’t know this!’ when all you had to do was call. I would have told you the good stuff and any issues.”

Belichick feels like there are more factors to consider beyond just pro-day. “It’s a hundred piece jigsaw puzzle,” Belichick said in response. “Here’s like two pieces of it, it’s pro-day and all the games, all the tape, all the football that they’ve played. How much is a vertical jump [or] a bench press?”

They both agreed that college football is as much entertainment as it is a sport.

Neither are huge fans of social media, but encourage camaraderie on their teams through in-person connections.

While the use of social media is increasing throughout the digital age, both coaches stressed the importance of in-person connections and not digital ones on their teams. Belichick, who does not care much about apps and texting, such as Snapchat – or “Snapface” as he’s once called it, said he prohibits the use of it during team-mandated time.

“I hate social media, we get rid of it whenever we can,” he said about its use on the Patriots. “Do things where you don’t bring your phone you just have a conversation [and] look the other person in the eye instead of texting them back and forth…It still comes back to fundamental relationships and communications, there’s no cell phones out there on the field. You better know what your teammates are doing, better know what you’re doing or you’re going to get beat.”

“Because of social media,” Saban added, “they’re getting a lot of their positive self-gratification by the communication they have from looking somebody in the eye [or] developing a relationship with them. I think that’s a critical part they all need to develop and you need to have to have a team.”

“No question,” Belichick agreed. “Who cares how many likes you get from two thousand people you don’t even know. There’s fifty-three guys in the locker room and those are the fifty-three that matter. I don’t know if that always gets through or not.”

The offseason is difficult for them both, but they spend time relaxing in coastal areas.

When the season is over, Belichick spends his time at his place in Nantucket, which he bought with his Super Bowl bonus. His family says that it provides him an escape to “shut it down” and enjoy time away from football by golfing and fishing on his boat.

“One of the hardest parts of the year for me is the end of the season,” Belichick said. “Everything that everybody else has said, [like] ‘Coach I didn’t want to bother this with you during the season, but now that it’s over – what about this, what about that…That’s hard. I appreciate them holding off until it’s over, but then, honest to God, I feel like it’s a tidal wave.”

“For me, a big part of [relaxing] has been Nantucket. You kind of have to separate a little bit, especially the end of the season, you’re so drained, emotionally spent.”

Meanwhile, Saban spends his time in Georgia on Lake Burton.

“There was a long time when I could not get away,” he admitted. “I could not relax, separate and not-not think about [football]. We have a place on Lake Burton…that’s been a salvation for me.” 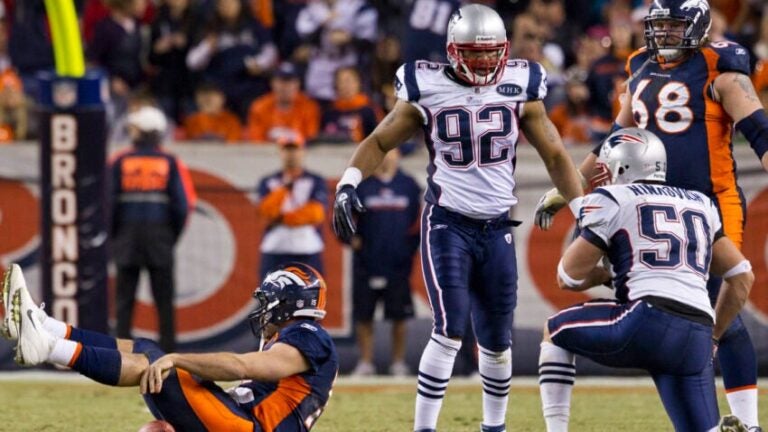