If any franchise in the history of professional football deserves the benefit of the doubt, it’s the New England Patriots of this era.

No, I’m not talking about scandals and –gates, real or accidental. The Patriots lost the benefit of the doubt in those sorts of matters with the original Spygate, when they got busted taping the Jets’ defensive signals from an unauthorized location after the league sent a memo saying, hey, guys, don’t do that stuff or there will be consequences.

That’s led to common exaggerations of what they actually did, magnification of future alleged transgressions (we still don’t know the whole truth and nothing but the truth about Deflategate, and I doubt commissioner Roger Goodell wants us to), and a notion shared among other fan bases that malfeasance has its own section in the Patriots playbook.

I don’t know what Goodell is going to do about this latest quasi-scandal with the Kraft Sports Productions rent-a-cameraman, presumably innocently, taping the Bengals’ sideline during the recent game against the Browns. But I know Goodell cannot be trusted to let a molehill be a molehill, and I know the Patriots are not getting the benefit of the doubt outside of New England, especially in the NFL’s Park Avenue boardrooms. Add another footnote of a dubious tale to the story of the Patriots dynasty.

Anyway, that’s more than I wanted to say about Spygate 2.0 or whatever the national shows are calling it. This is about a different kind of benefit of the doubt, one that the Patriots deserve based on their accomplishments of the last 19 years, and one they may even end up justifying if a few things break right.

I still believe this team can get to the Super Bowl. And you should, too. They deserve that much.

Sure, it feels like months ago now that the defending champions, who have represented the AFC in the last three Super Bowls, were the clear front-runner in the conference. The season changed that early November night in Baltimore, when the 8-0 Patriots collided with Lamar Jackson and the 6-2 Ravens, and not in a good way.

Baltimore prevailed convincingly, 37-20, and what was a three-game winning streak entering that showdown is now a 10-game winning streak that could not be more impressive. The Ravens have scored at least 40 points in four of their six games since dropping 37 on the Patriots. They’ve beaten the 49ers — perhaps the best team in the NFC — on the road. They beat the Texans and Rams in back-to-back weeks by a combined score of 86-13.

Led by the electrifying Jackson, the MVP front-runner whom no one seems to suggest should be a defensive back anymore, Baltimore took that victory over the Patriots and emerged as the class of the league. The Ravens are the favorite, and man, do they deserve to be.

I know, it’s tough to believe the Patriots can achieve their biggest goals right now. They’d lost three of five games before Sunday’s 34-13 win over the Bengals, and the inclination to take any significant positives from that is tempered given that . . . well, it’s the Bengals. You should beat them 34-13, if not by a larger margin.

Due to attrition and perhaps some poor personnel decisions, the offense is thin in established skill players. Tom Brady and Julian Edelman are a combined 75 years old, and their battered bodies are too often moving like it. Brady, battered often lately, needs to recalibrate his internal clock. He’s rushing throws when he doesn’t have to, and I suspect he will fix this.

But there were some good signs against the Bengals, and they matter even considering the quality of the competition (or lack thereof). Sony Michel had arguably his best day running the ball all season. Maybe he’s primed for another impressive playoff performance. Left tackle Isaiah Wynn is a work in progress in the passing game, but he’s a road-grading truck in the run game already.

Most notably, N’Keal Harry caught a touchdown pass, and offensive coordinator Josh McDaniels clearly prioritized involving the rugged rookie receiver. I don’t care if Brady has to tell him exactly how many steps to run and which way to turn on his route each time they huddle up, the kid needs to be involved. He was Sunday, and it paid off.

Sometimes lately this season has felt like 2013, or 2015, when Brady took undermanned offenses into Denver and saw quests to get to the Super Bowl end one win short both times. But there remains growth potential on offense — with Harry, and with midseason pickup Mohamed Sanu, too — and there’s one element to this team that should be cause for hope.

The defense, of course. It may not rate among the best of all time after allowing a total of 88 points in losses to the Chiefs, Ravens, and Texans, but I’m comfortable saying this: It’s the best defense Belichick has had in his 20 years with the Patriots. I’m not sure Stephon Gilmore is going to win Defensive Player of the Year — Pittsburgh’s T.J. Watt has some insane statistics — but he’s made a compelling case, and I’m not sure Ty Law or Darrelle Revis ever played as well as he is right now. Gilmore, who had a pick-6 among his two interceptions Sunday, is a game-changing defensive player who could steal a playoff victory if a team is foolish enough to throw his way.

This defense is an improved version of the group that held the 527-point 2018 Rams to a stinkin’ field goal in the Super Bowl. The hunch here is that they shut down Josh Allen — whom they picked off three times in a 16-10 win earlier this season — and the Bills Saturday, beat the Dolphins in the season finale, and lock down that No. 2 seed in the postseason.

The road will not be easy. Before we can even get that delicious rematch of Lamar Jackson versus their hellacious defense, they’ll probably have to beat the Chiefs or Texans, teams that already have blemished their won-lost record this season. It’ll be tough. But give them the benefit of the doubt. On the field, they’ve always deserved that. 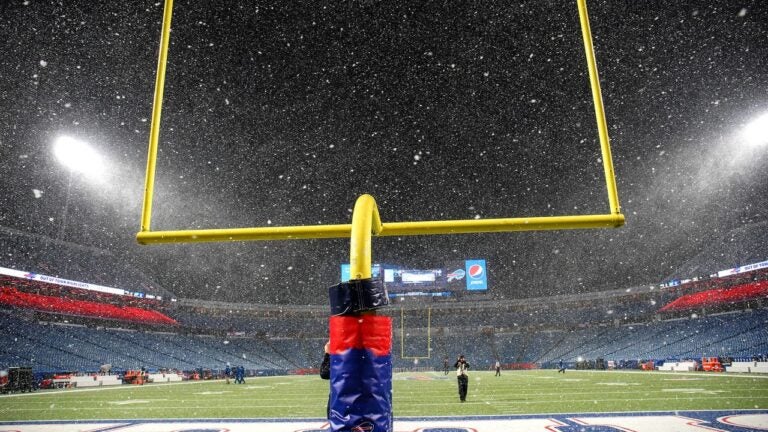 Countdown to kickoff: Patriots and Bills square off in AFC East showdown on Monday Night Football