As far as closing acts are concerned, it wasn’t exactly like Ted Williams hitting a home run in his final at-bat, was it?

Then again, it’s sort of an absurd conviction to assume that Tom Brady’s final throw in his Hall of Fame NFL career will go down as a pick-six.

Brady may change his zip code by the time the 2020 football season begins, but he isn’t going anywhere. He’s already too committed to the TB12 brand’s promise that he can stick to it until he’s 45 years old, still three years away. And even if this trying season with the Patriots might have pushed that date forward quicker than he would have ultimately preferred, do you really think Brady’s pride is going to let him walk when his final moment on the football field was more reminiscent of Geno Smith than of a six-time Super Bowl champ?

“I would say it’s pretty unlikely,” Brady said in the aftermath of Saturday night when asked about the possibility of retiring this offseason. “But – yeah, hopefully unlikely.”

Do the Patriots have any timeline for when they expect to sit down with Brady and discuss a new deal for the free agent?

The only two obvious truths to escape from Tennessee’s 20-13 wild card win at Gillette Stadium might probably be that Brady doesn’t plan on retiring, and Belichick doesn’t plan on having him around any longer. The divorce will be amicable on camera, filthy behind the lens. Each will say all the right things in order to not look like they’re on the bad side breaking up the band. Nobody wants Gisele to be stuck with the label of being the Patriots’ Yoko.

Brady will go elsewhere and create his own band of disjointed refugees, each with his own reason for believing it’s time for another scorched earth tour. After all, wherever Brady goes, Antonio Brown might follow. So too might Odell Beckham, and whatever other diva wide receiver feels the tractor beam from Brady’s team of mercenaries.

Meanwhile, in New England, despite anything you might have heard to the contrary, there’s still a dynasty that needs attending.

Buried for dead in the moments after the Patriots lost their first wild card playoff game in a decade, the Patriots are just as capable as anyone as re-tooling to keep up with the Joneses. The dynasty’s aura remains with Belichick in Foxborough. It won’t follow Brady wherever he’s trying to recreate his former glory at the age of 43 and beyond.

The 67-year-old Belichick might have five more years at the helm, something we figured we’d never see when he professed some time back that he didn’t want to become the next Marv Levy. But if we can propose five years, that’s plenty of time to squeeze more fuel into the dynasty engines and win the “Is Brady or Belichick more to credit for New England’s success?” argument for good.

That’s because whatever team brings Brady in just might as well be looking back in time itself.

In case you haven’t heard the Baltimore Ravens collectively proclaim how they were at the forefront of changing the game with Lamar Jackson at the quarterback spot, the NFL is turning into a new offensive format, one siphoning from its college roots. No longer is a mobile quarterback seen as a unique asset but a necessary asset. Pocket presence is more valuable when the quarterback can find his own way out.

Find the biggest, strongest, fastest guy out there with the smarts that Jackson has brought to the Ravens. Don’t settle for the big, strong, fast guy with the idiotic decision-making that Josh Allen displayed in Saturday’s wild card loss to the Houston Texans.

It might not be the fact that Brady will be 43 years old and showing it as to why Belichick doesn’t want him back. It might just be that this isn’t Brady’s game anymore. There’s a new breed in charge.

Who would you feel more comfortable betting on: Brady winning a Super Bowl with the Chargers/Giants/Titans/Redskins/insert team here, or Belichick winning a seventh in New England with a defense already having proven its chops and a new offensive approach finally free from Brady and Josh McDaniels, destined for a head coaching gig elsewhere?

The answer should be easy.

Besides, just how badly do you think Belichick will want to load up once Brady officially flees the coop? Scorched earth can go both ways.

Take solace in saying farewell to Brady. But revel in the fascination that will be building Chapter 3 of the New England Patriots dynasty.

“Relative to the 2020 team, we have more time and we’ll try to use that time as productively as we can,” Belichick said. “We’ll sit back, we’ll take a look at what the priorities are, what we can try to accomplish and then make the most efficient use of this time that we can. That’s what we’ll do. Has all of that been laid out yet? Absolutely not. That will be one of the first orders of business.”

Brady won’t go down with a pick-six.

Belichick won’t go out with a wild card loss to a former pupil.

But if we’re talking about which one has the better chance to keep the party rolling, it’s probably the one who can better recognize the changing face of the NFL quarterback.

Who wants to play the part of Steve Young? 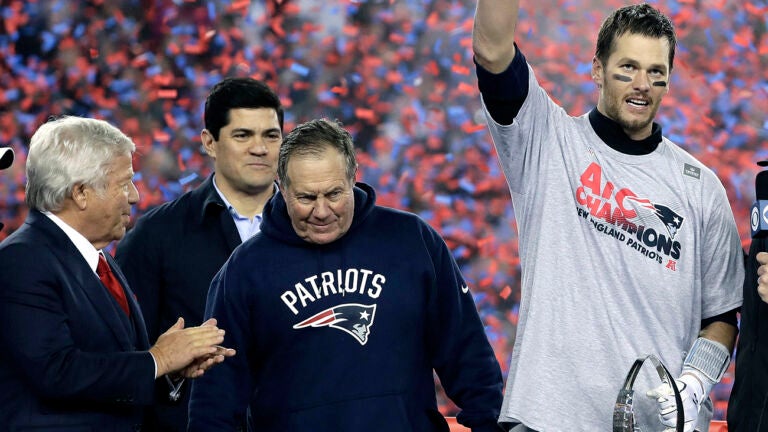 Tedy Bruschi shares story of Tom Brady’s ‘addiction’ for championships: ‘Nobody has ever won three in a row’