We’ve learned a lot about Tom Brady in his 20 seasons in New England, of course.

We know he’s the greatest quarterback ever to take a snap, a six-time champion, the face (along with coach Bill Belichick) of the kind of dynasty that just isn’t supposed to be possible these days.

We know he fervently believes in a certain healthy lifestyle, and has found satisfaction in making “TB12’’ a living part of his brand even as some aspects of it raise eyebrows and skepticism.

We know he’s married to a supermodel, and that he’s a doting dad, the kind that inspires letters to the editor from admiring fellow parents.

And recently, we’ve learned this about Tom Brady: The guy is kind of a troll.

No, not the classic under-the-bridge, you-shall-not-pass kind of troll. That kind of troll, which is featured in the Norwegian fairy tale “Three Billy Goats Gruff,’’ threatens to eat a goat. Brady, of course, is the GOAT (greatest of all time, for you acronym-averse). See, not the same.

Brady is in the vein of the more modern kind of troll, an Internet agitator, the kind that gets a kick out of causing a stir and getting a reaction. He’s one of the milder of this species; many Internet trolls come across as a breed of quasi-human that would try to steal your private data when they’re not insulting you in 280 characters or fewer. But Brady definitely has some of the defining traits. At the least, he sure knows how to get a reaction.

Consider what happened late last week, and culminated Sunday during Super Bowl LIV, the first one Brady and the Patriots did not participate in since the 2015 season. On Thursday at 6:36 p.m., Brady (or more likely, a member of his mysterious social media team), posted a photo on Facebook and Instagram of the quarterback facing a football field from the end of a tunnel. Brady was silhouetted in the black-and-white photo.

That led to a cornucopia of speculation. Was he telling us he was leaving the Patriots? Was he telling us he was staying with the Patriots? Was he just feeling blue, with his contract up and the Patriots long since eliminated from the playoffs? Was he paying respects to the late Kobe Bryant, who was photographed in similar black-and-white photos through the years, the kind that look as if they were shot in the noir setting on Instagram?

It left just about everyone guessing. ESPN’s Adam Schefter tweeted that he had been told it didn’t have to do with his football future, but that didn’t stop other ESPN personalities from speculating. “As predicted, new team for Brady in 2020,’’ tweeted Max Kellerman, who has made a lot of money while making amusingly wrong predictions about Brady through the years.

As it turned out, we got our answer during the Super Bowl, and it was not nearly as interesting as it seemed it would be. The photo turned out to be a teaser for an advertisement for the streaming service Hulu. Brady posted the ad on his social media feeds at 7:15 p.m. Sunday, approximately the same time it aired for the 99.9 million people who were watching the game on Fox.

In the ad, Brady teases — or trolls — fans once more, saying: “They say all good things come to an end. That the best just know when to walk away. So to my teammates, my family, and most of all my fans, you deserve to hear this from me.’’

He then broke into a sales pitch for Hulu, before ending the 30-second ad by saying, “But me? I’m not going anywhere.’’

Oh yeah, it was a troll job. Expertly executed, too.

“I loved this so much because Tom trolled y’all’s thirst,’’ said former NFL defensive lineman Marcellus Wiley on Fox Sports 1’s “Speak For Yourself’’ Monday. “I’m talking to all y’all with no wife, no life, no kids who got time to be so damn socially curious.

“Y’all writing detailed synopsis of a dude who’s just standing in the dark. I can’t remember how many articles were ever written about something that was so meaningless. He took a picture in the tunnel. ‘What does it mean?’ Wow, wow, y’all going to those places? Fine.

“It wasn’t elaborate, it wasn’t no big ol’ hoax. It was just simple, use your thirst against you. Good job, Tom Brady.’’

Since Brady and his team began using social media extensively in 2016, trolling hasn’t been one of his specialties, though he hasn’t been above needling a friend or former teammate at times. Sometimes they’re corny, such as his photo of a skeleton wearing a Peyton Manning jersey in October 2016 with the caption, “Getting old Peyton!!’’

But he sometimes drops a good one-liner, such as this past October when he commented on former teammate Jacoby Brissett’s photo of himself wearing a nice suit while at the airport. “Nice pants,’’ Brady wrote. “They have any that fit you?’’

For a couple of seasons, Brady would post a comic designed as the “TB Times’’ newspaper to celebrate Patriots wins. Those were often bizarre non-sequiturs — for some reason, a cartoon alligator was a recurring guest star — but they did generate buzz.

Brady hasn’t said much about his approach to social media through the years, but he did offer this explanation to USA Today early in 2017: “I want my pages to represent who I really am. The messages all root back to who I am and how I try to live my life. “

That doesn’t explain the goofy cartoon alligator, though, and it certainly doesn’t shed any light on his recent approach.

Still, it would be understandable, given all of the half-formed speculation as he approaches free agency, if he couldn’t resist taking the opportunity to send a cryptic message and deliberately send all of the conjecture about his future in a different direction.

It was a reminder, in black and white, that while we’re all on high alert about what comes next, he still holds the power.

I’ll bet you this isn’t the end of it. As rumors about his future swirl, he’ll probably post some other cryptic photo designed to leave us guessing.

Maybe it will feature lightning (he’s heading to the Chargers!), or a faraway shot of a bridge (it must be the Golden Gate, he’s going to San Francisco!) or some random image of a blackjack table (he’s going to Vegas, baby!). 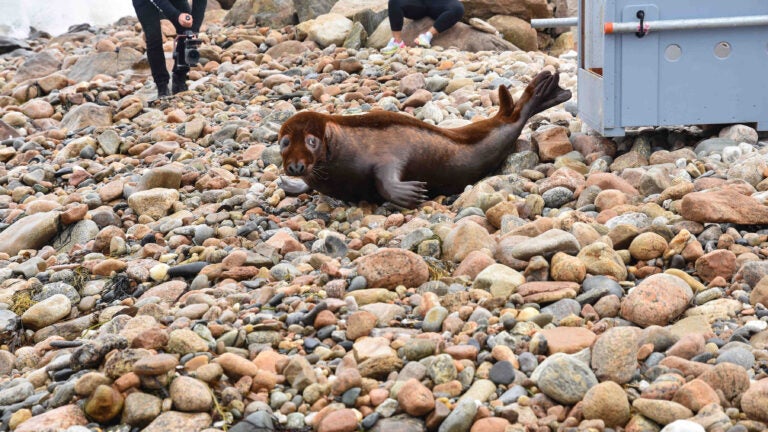 Shoebert is back! Sort of.