Earlier this week, RamsNewLook.com went live, confirming a leaked logo broken by a fan whose buddy saw some embargoed gear at his sporting goods store. The Los Angeles Rams followed through on their promise to rebrand alongside their scheduled move into $5 billion SoFi Stadium this fall, and also — in another modern tradition — needed to explain every detail about what they chose.

The curvature of the “iconic” horn, the site went on to explain, is based on the “golden ratio (aka Fibonacci Sequence),” which was “the driving concept behind the new logos.”

The openness is something that the Los Angeles Chargers didn’t get to in 2017, when they floated a Dodgers-like interlocking “LA” at the time of their move from San Diego before racing from it amid its open mockery. Their fully updated palette came this week, leaning into their famed powder blue and drawing “inspiration from the surf, skate and car cultures” of the 1960s from whence they came.

It’s that time of year in the NFL: New homes for free agents, new looks for the teams chasing them. (Has it really been just a year since the Jets introduced us to Gotham Green, Spotlight White, and Stealth Black?) Few years, however, are as active as this one, with five other teams ready to join L.A. with either uniform changes or minor tweaks. That includes the Tampa Bay Buccaneers, who’ll unveil what Tom Brady will be wearing this season in April, and the Patriots, who have some “subtle changes to their uniform” coming soon.

Subtlety was not the order of the day this week in 1993, however. That was when the Patriots shelved Pat Patriot for the Flying Elvis, to a response relatively similar to the social media invective of today. In a Boston Globe phone poll, 71 percent of nearly 7,300 respondents disapproved.

“It doesn’t look mean enough,” said one. “Looks like an ad for the Old Man in the Mountain,” said another.

“This is another embarrassing moment in Patriots history,” added a third. “Get rid of it.”

They didn’t, and two decades of all but unprecedented success with it on the sides of their helmets likely means they never will.

Pro football had multiple false starts in Boston, from the Boston Bulldogs of 1929 to the Boston Braves/Redskins of the 1930s (they jumped to Washington, D.C., in 1937 and promptly won the NFL title) to the Boston Yanks of the 1940s. When Billy Sullivan’s syndicate of 10 owners received the eighth and final franchise of the expansion American Football League in late November 1959, the immediate concern was where it would play. Sullivan had been the spokesman for a 60,000-seat multipurpose stadium proposal in Norwood that sought to host both football and the Red Sox; his hope was, after a couple seasons, the team’s success would help make it a reality.

Things change, of course. After initially announcing he’d turned down an offer to be both the team’s president and general manager — “I’ll just be a stockholder,” he said, “I have a job now” — he and his family ended up the face of the franchise into the 1990s. So it was Sullivan, on Feb. 16, 1960, attached to the announcement the franchise would be known as the Boston Patriots. Seventy-four people suggested the name, it was reported, with it beating out the likes of Colonials, Pilgrims, Puritans, Braves, Beantowners, Hubs, and Bees. (It should be noted the Boston Daily Record, perhaps among others, referred to the team unofficially as the Patriots just about from the start.)

Deep in the next morning’s Globe, the paper’s sports cartoonist Phil Bissell celebrated the announcement with a drawing, he told SportsLogos.net in 2016, he whipped together in about 45 minutes.

“I thought about it for about two minutes,” Bissell said. “I had to get the day’s work out.” 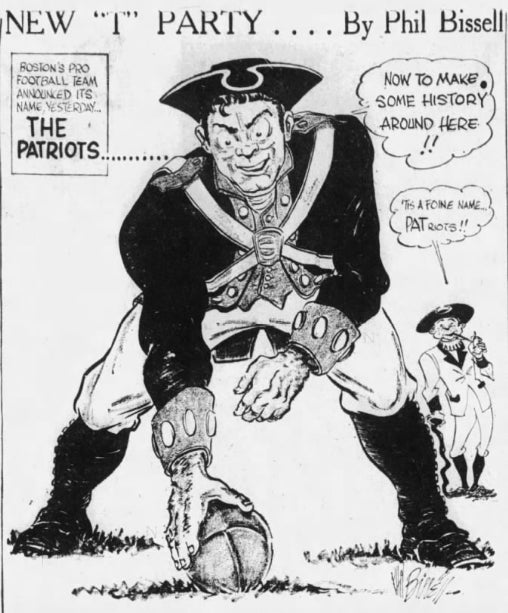 Though Pat wasn’t the team’s original logo — the tri-cornered hat on their 1960 helmets was in Bissell’s drawing, but is credited to Walter Pingree, a fan from Somerville — Sullivan loved it, having received Bissell’s original drawing from Globe sports editor Jerry Nason. Perhaps more importantly, Sullivan’s youngest son, future Patriots GM Patrick Sullivan, deemed it his favorite out of all possible logo and branding suggestions. It all led to Bissell being hired to draw the team’s well-known gameday program covers, and Pat Patriot to be installed on the team’s helmets beginning in 1961.

Pat Patriot followed the team on its nomadic journey around Boston, from Boston University’s Nickerson Field (1960–62), to Fenway Park (1963–68), Boston College’s Alumni Stadium (1969), Harvard Stadium (1970), and to what was originally known as Schaefer Stadium — the brewer signing a $1.5 million, 15-year lease for the naming rights to the team’s privately funded Foxborough home prior to its opening.

With that final move also came a name change. Well, technically, two: After about a month as the Bay State Patriots, which was met with derision from both fans and NFL commissioner Pete Rozelle, the franchise changed course and became the New England Patriots, getting the blessing of the league on March 22, 1971. (Sullivan diplomatically explained after the second swap that “there were a lot of things … the owners throughout the league found unacceptable.”)

It would not be the last time that decade Patriots’ branding would be decided by odd means. 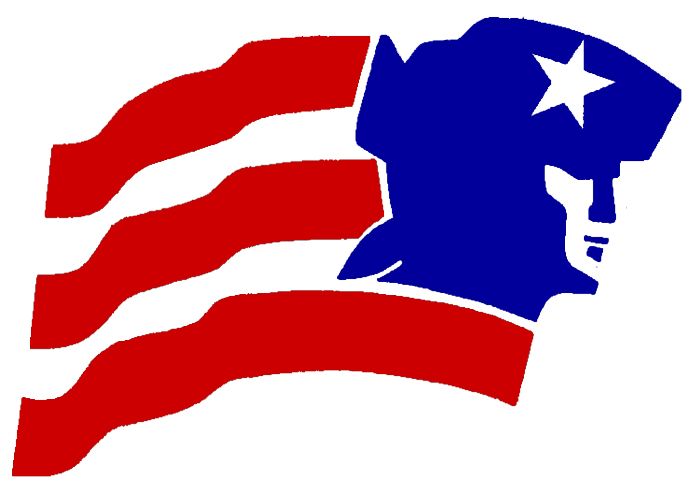 The logo the Patriots nearly changed to for the 1980 season.

With the sports merchandise market starting to boom, the intricacies and detail of Pat Patriot were becoming problematic. In small applications, like a cap, things like facial features — which did vary on Pat through the years — were difficult to make out. Thus, the Patriots approached NFL Properties to design them a new logo in 1976. While they immediately used one league commission in that period, the oft-mocked SuperPatriot mascot who was dismissed not even three months into the 1978 season, the team pushed a logo change into 1979.

News broke in July that the new decade would bring a new look, “a more modern concept of the patriotic spirit … sort of 1776 dressed up in 1980 design,” wrote Michael Madden in the Globe. Response, even before the team unveiled the Elvis-like flag mark in September, was swift: Bissell told columnist Ray Fitzgerald he was “prostrate with grief and barely able to function.” Sullivan said he received 100 letters of protest, many times more than he’d gotten about any football moves.

“I’m a traditionalist. A lot of guys have fought under that little guy,” said franchise icon Gino Cappelletti, at that point a Patriots coach and yet to begin his 28-year radio pairing with Gil Santos, to the Herald American. “There are a lot of memories attached to him and I’d like to see him stay.”

The doubters also included Billy Sullivan himself, ultimately pitted against NFL Properties and his own marketing team.

“I think [he] got cold feet on the whole concept,” said Brian Morry, executive director of the Patriots Hall of Fame, to Patriots.com.

The ultimate decision was punted to Patriots fans. On Sept. 23, 1979, the team painted each logo in an end zone, and had its cheerleaders display both during halftime of New England’s game against the Chargers. First, those in favor of the new design were asked to cheer, a low roar registering on the displayed decibel meter. Then, a call for those in favor of Pat.

“It wasn’t even necessary to count the votes,” reported the Globe.

Pat Patriot remained in place for another 13 seasons, through the end of the Sullivan ownership in 1988, through Victor Kiam’s turbulent four years in charge, and into James Orthwein’s short, but memorable tenure.

Orthwein is best remembered for trying and failing to relocate the Patriots to his native St. Louis, but he made two changes with lasting impact: Hiring Bill Parcells, and installing the logo today immortalized in countless tattoos and, most notably, on six Super Bowl banners. An advertising executive and longtime board member at Anheuser Busch, Orthwein didn’t much worry about making waves as he took over the NFL’s worst franchise, which he promised from the start he planned to quickly flip after he stabilized the business.

After going 2-14 in 1992, New England’s fourth straight losing season and sixth straight missing the playoffs, January 1993 brought a flurry of activity. Coach Dick MacPherson was fired, news leaked that Orthwein was seeking bids to sell the team for the $110 million he’d put into it, and Parcells left his job at NBC to turn the Patriots into an on-field winner. Though unknown at the time, his introductory presser was largely the last gasp of Pat Patriot.

A week later, the first story broke that “the team had started talks with NFL Properties about changing its logo.” Not even two months later, it was done, approved by the NFL in the second week of March and leaked by the Globe to the world on March 26. 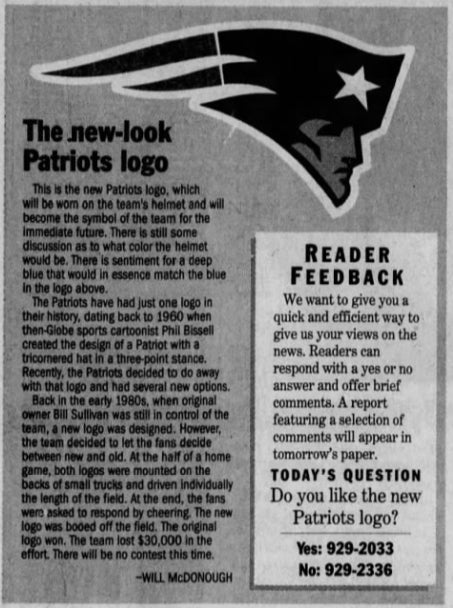 The new Patriots logo, as the Globe broke it to New England on its sports front.

“I am extremely pleased,” Orthwein said. “Merchandising is no longer just a local situation. Many professional sports teams today are marketing themselves to the nation and the world. It is no accident that teams such as the Chicago Bulls, the San Jose Sharks, and the Orlando Magic are attracting fan interest and selling merchandise across the country because of their appealing logos and color schemes.”

The Elvis comments came quickly, as did references to the Old Man of the Mountain and Darth Vader. When the team unveiled its uniforms and the script Patriots wordmark the following week, with trendy silver helmets and primarily blue jerseys, Orthwein noted that “we wanted to be historically accurate. The British Army wore red, not the Patriots.”

Even Bissell gave it tepid approval, telling the Globe, “It’s nice, but it would be better for a different team.”

Within a year, Robert Kraft bought Orthwein’s team, and the Patriots of the years since may as well be a different franchise, though their look has remained largely consistent in the years since. Italicized jerseys numbers and massive logos on the shoulders came in after the 1995 preseason, and stuck around the rest of the decade.

As Bill Belichick came in for the 2000 season, so too did the look we know today: The blue darkened to navy, the shoulder logos replaced by a “lightning bolt” of color. Though Elvis remains polarizing, the only significant change since was a new wordmark in 2013.

What’s next? Likely not much, though a little more red — which reappeared as a primary jersey color on Thanksgiving 2002 — would be nice. In a massive upheaval offseason for the franchise, there’s something to be said both for keeping things the same and for embracing the moment to shake it up.

Maybe that’s the real lesson here. When it comes to logo changes, the only sure bet is there’ll be no absence of people with something to say.