With the departure of Tom Brady, the uncertainty of who will quarterback the New England Patriots is a looming question on everyone’s minds.

Is Jarrett Stidham the next in line? Former Patriots vice president Scott Pioli said he believes the team is ready to give the young quarterback his “shot.” Stidham’s teammates, like Jason McCourty, have raved about his work ethic. In a profile for Bleacher Report’s B/R Mag, titled “Replacing Tom Brady,”  a handful of scouts and those close to the second-year NFL QB broke down Stidham’s potential, and how he could fit into the Patriots’ system.

Here’s what they had to say about him:

He was “miscast” in Auburn’s system.

Stidham, who was a four-star prospect out of high school and ranked as the No. 2 dual-threat quarterback in the class of 2015, decided to leave Baylor after his freshman season, where he threw for 1,265 yards and had 12 touchdowns and two interceptions. Interim head coach Jim Grobe said that Stidham did not want to sit on the bench his sophomore year behind Seth Russell. Meanwhile, the football team’s alleged sexual assault case shook the program.

Stidham then transferred to McLennan Community College in Waco, Texas, and sat out for a year before making the move to Auburn. One Big 12 conference coach who tried to recruit him thought he was going to get lost in their system.

“We recruited him when he left Baylor, and we kept telling him he can’t go to the SEC and play at Auburn or Florida,” the coach told Bleacher Report. “Neither one of those teams had any recent history of throwing the ball with any kind of efficiency. Our pitch was simple: You’ll be a first-round pick in the NFL here in this offense. You’re going to get lost there.”

Stidham did go to Auburn. In his two seasons there, he threw for a total of 36 touchdowns and 11 interceptions. Many thought he did not have the same caliber of  promise as he’d shown before.

“He had first-round talent that was mucked up by a system that didn’t fit him,” another scout said in the article. “He looked good at the Senior Bowl. He looked good at the combine. But we’re a tape-is-your-resume league. And that tape at Auburn had some brutal stretches. Enough to make a lot of personnel departments push him down—and in some cases, off—draft boards.”

He’s already had a season under his belt to get acclimated to the Patriots’ way of doing things, but there’s no question Stidham needs this season to develop further.

“[The Patriots] obviously think well enough of him,” said Pioli. “He’s been in the system, he’s seen it for a year.”

Bleacher Report NFL analyst Mike Tanier added: “The Patriots have a top-notch offensive line and two good ‘safety valve’ receivers in Julian Edelman and James White—good for the development of a young QB. And Josh McDaniels’ system is extremely adaptive.”

“No one can predict what the Patriots will do at this stage, but one thing consistently heard is that Bill Belichick and Josh McDaniels like Jarrett Stidham as the quarterback of the future and believe he’s ready to take over for Tom Brady.”

He won’t be Tom Brady, but scouts say he could be better than we think.

Stepping in for a legend like Brady may be the most impossible task in NFL history. Whether Stidham can rise to the challenge and lead the Patriots is to yet to be determined, but some scouts quoted in the story give him a good chance.

“He’s a lot closer to playoff quarterback than another guy who falls on his face replacing a legend,” one NFL scout said.

“Knowing Bill, he’s excited about taking this big ball of clay and molding it into his image,” another scout added. “I’ve always thought Stidham was way undervalued as a fourth-round pick. I begged our guys to take him. He has so much more ability than he was able to show in college.” 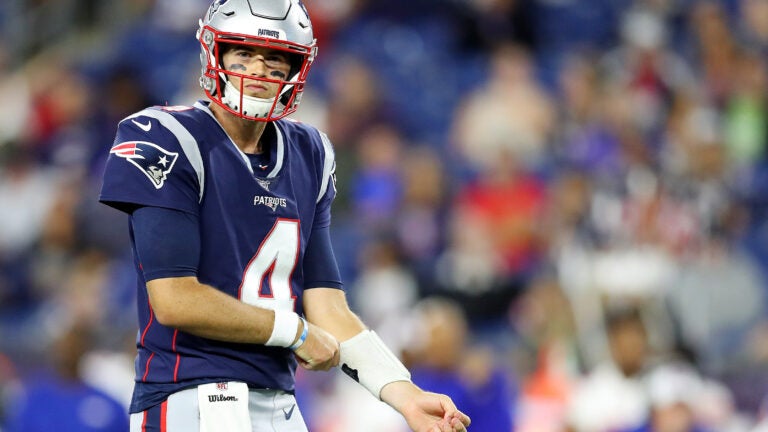 We watched every Jarrett Stidham throw from 2019. Here’s what he could bring to the Patriots’ offense.