Here’s a closer look at three prospects that could be coming to New England:

Who is Tua Tagovailoa? A great mystery of the draft

Once projected as a top pick in the NFL draft, Tua Tagovailoa ultimately became one of its biggest mysteries.

A dynamic left-hander who won two national championships as Alabama’s quarterback, Tagovailoa has been recovering from a hip dislocation suffered in a November game. He was cleared to begin football activities in March, but teams were unable to scout him in person because of travel restrictions related to the coronavirus pandemic.

Although this has affected all potential draft picks, it may be especially detrimental to Tagovailoa, because scouts have been unable to assess his progress in person.

During his time at Alabama, he also fractured his left index finger, sprained his right knee and hurt both ankles, and his draft hopes may have been undermined by perceptions that he will always be at risk of injury.

“Durability is as big as ability,” Michael Lombardi, a former general manager for the Cleveland Browns, said. “When you have a history of injury, I think people are concerned. You can’t overlook it.”

Dilfer said their approach borrowed a philosophy from the movie “Rocky IV”: Like Rocky, who traveled to Ukraine to train without telling anyone, Tagovailoa was to keep his plan a secret. Even his social media pages had to go quiet.

The goal, Dilfer said, was to ensure that Tagovailoa could focus solely on getting back into shape.

After lying low for January and February, Tagovailoa began making appearances on ESPN to talk about his recovery and his draft preparation.

He has also been using videos and social media to try to allay concerns teams may have. After his pro scouting day on the Alabama campus was canceled because of the pandemic, Tagovailoa set up an alternative version at a private facility. To comply with government regulations, fewer than 10 people attended. Footage from his one-hour workout was sent to NFL teams, and parts of it were later posted online.

“He could go play a game tomorrow without question,” Dilfer said. “He wouldn’t even flinch.”

Tagovailoa’s agent and doctors have also been vocal on his behalf, telling the news media that he will be fine by the time training camp starts — with the same strong, accurate arm that made him the Football Bowl Subdivision leader in quarterback rating last season — and that he is expected to make a full recovery.

Who is A.J. Epenesa? A defensive lineman following a family tradition

Growing up, A.J. Epenesa and his two oldest siblings were always bigger than their teammates, and their father, Eppy, made sure they worked harder, too. On summer days, they would run a mile to and from a bridge — stopping there to do core workouts — scale hills at a local park, and flip tires and perform ladder drills behind their home in Glen Carbon, Illinois, outside St. Louis.

Some of Epenesa’s friends soon joined in. So did friends of his brother Eric. Three would turn into 30, or more. Eppy — who played on the defensive line at Iowa, as A.J. would later — trained them all.

Offering his time, backyard and expertise, Eppy asked for nothing in return. He worked to help them all become better athletes and, by instilling the respect-your-elder values of his Samoan heritage, tried to make them better people, too.

“We just bring people in and make them feel welcome,” Epenesa said. “It’s something we enjoy doing.”

The Epenesa family has six members, but that number swells to 150 on Friday nights during high school football season, when the family’s backyard hosts potluck dinners after home games. Teammates, friends and their parents hold hands to say grace before devouring plates of short ribs and pork steaks.

The Epenesa home would buzz with energy and activity at all hours. All four children excelled in sports, much as their father and their mother, Stephanie, had. Samantha, the oldest, played volleyball at Purdue; Eric plans to walk on as a football player at Iowa; and Iose, an eighth-grader, could wind up being the best of them all.

After leaving American Samoa in the early 1990s to play football at Iowa Wesleyan, Eppy met Stephanie, a volleyball player. Later he walked onto the team at Iowa, taking a student loan to pay for his fall semester before earning a scholarship.

For Epenesa, that story of sacrifice and success resonated throughout his childhood. Immersed in Hawkeyes tradition from an early age, Epenesa thrived at Iowa, evolving from a pass-rush specialist his first two seasons into an every-down terror in 2019, when he had 11 1/2 sacks and 14 tackles for a loss. Seven of those sacks came in his final four games.

“Whichever team drafts him is getting him at the right time,” Kelvin Bell, the Iowa defensive line coach, said in a pre-draft interview, “because the arrow is continuing to go up.”

Epenesa considers it a responsibility — and a privilege — to serve as a role model for younger Polynesian athletes, just as longtime NFL stars Junior Seau and Troy Polamalu did for him. He has not visited Samoa since middle school — he was unable to accompany his family members last summer, when they watched the players on the football team at Eppy’s high school practice with tattered equipment. But he is looking forward to someday returning the support he has received from Samoa.

“Whenever I have the chance to go back,” Epenesa said, “I definitely want to give back as well.”

Who is Jordan Love? A high-risk, high-reward quarterback

The quarterback who threw the most interceptions in Division I in 2019 will play in the NFL next season. Not only that, he will almost certainly be drafted in the first round, and it’s even possible that a team will trade up to select him.

For his new team, that Jordan Love threw 17 interceptions at Utah State after a revelatory redshirt sophomore season, when he threw just six — while averaging 8.6 yards per attempt — will not matter as much as the context behind them.

Though he will most likely be the fourth quarterback selected this year, Love is the most tantalizing prospect since Patrick Mahomes, who, despite obvious bountiful physical ability, had to quell the perception that playing in an Air Raid offense at Texas Tech would hinder him in the NFL. (Spoiler alert: It hasn’t.)

From a strictly stylistic standpoint, Love, at 6-foot-4 and 224 pounds, resembles Mahomes, too. His arm strength, coupled with a flair for extending plays, passing on the run and throwing from crazy angles, produced a string of absurd highlights. His film — from last season, especially — also contains instances of lapsed mechanics, forced throws and shaky field vision.

Love followed a trajectory similar to that of Josh Allen, another former Mountain West Conference quarterback with a powerful arm, whom the Buffalo Bills drafted No. 7 overall two years ago. Like Allen, Love excelled as a sophomore, when he was surrounded by strong personnel, then backslid when the quality around him diminished. Besides playing with nine new offensive starters last season, Love also acclimated to a new coaching staff and offense.

“Some of it was just the result of the desire to make plays and the desire to find ways to score,” Mike Sanford, who was Utah State’s offensive coordinator last season, said. “Jordan put the onus on himself and, quite frankly at times, needed to create.”

Selecting the wrong quarterback can doom an organization, spawning other poor decisions and consigning it to a perpetual rebuild. But for a young quarterback to develop and succeed, a strong — and stable — infrastructure is critical, and Jim Nagy, the 18-year NFL scout who is now the executive director of the Senior Bowl, said it was even more imperative for Love. Nagy believes that Love has the potential to develop into the best quarterback taken this year but that, ideally, he will sit for a season.

“In hindsight, we’re all saying, ‘How the heck did Patrick Mahomes last to 12?’” Nagy said, referencing the pick the Kansas City Chiefs used to draft him. “If Jordan gets to the right situation and everything clicks for him, we’re going to be sitting here in three or four years saying, ‘How did players X, Y and Z get drafted ahead of Jordan Love?’” 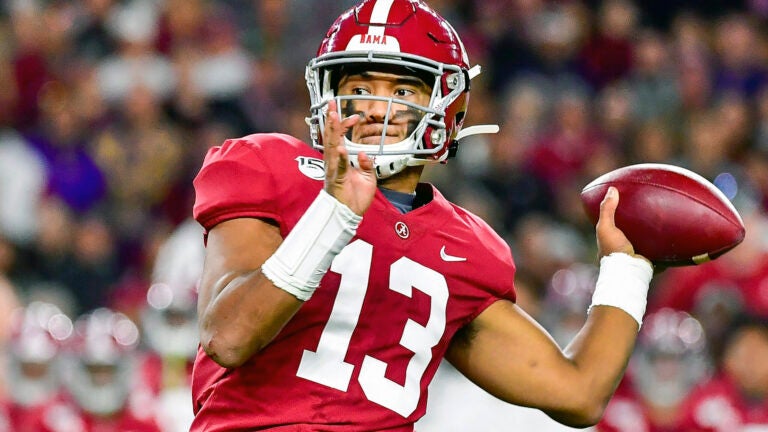 Morning sports update: Peter King explained why he thinks the Patriots will trade up for Tua Tagovailoa