Welcome to the Unconventional Preview: 2020 NFL Draft Edition, a serious yet lighthearted look at the Patriots’ most important draft in years …

During their two-decade run as the ultimate NFL dynasty, the Patriots have featured extraordinary stability in three spots (excluding ownership): Head coach, quarterback, and, to a somewhat lesser degree of reliability and importance, kicker.

Bill Belichick is, of course, the franchise’s exemplar of stability. But as he leads his 21st draft as head coach of the Patriots when the NFL Draft festivities commence at 8 p.m. Thursday, his decisions and selections are going to be looked at through an unfamiliar prism.

Tom Brady, the greatest quarterback there has ever been, is gone, becoming a Tampa Bay Buccaneer for his football twilight, and no, that still doesn’t totally compute.

Stephen Gostkowski, who succeeded Adam Vinatieri in 2006 and eventually surpassed him as the Patriots’ all-time leading scorer, is an ex-Patriot too, having been released in March.

Even if the Patriots don’t go for a quarterback early and a kicker late, they have a rather lengthy list of needs across the board, including a linebacker (if not two), another receiver (again, if not two), a prospect at safety, depth on both lines, and … well, let’s just say the Patriots, so often drafting to enhance a roster in recent years, need a rich influx of talent to come from this one.

What will they do? Pretty much anything seems possible, from trading up to take a quarterback in the first round to trading out of the first round altogether. Many NFL reporters regionally and locally pinpoint prospects that fit typical Patriots criteria, but it seems a lot of luck is involved in nailing down what the team will do. Here is to finally getting some answers.

Kick it off, Goodell (I hope he can hear the booing in quarantine) and let’s get this draft started …

Colleague Ben Volin has floated the idea of trading up for Tagovailoa, the Alabama southpaw QB with a hip that may or may not go the way of Bo Jackson’s. That would certainly be the boldest move Belichick could pull off. It seems more likely the Patriots take a QB later. I’ve seen Love mentioned in two mock drafts as the Patriots’ choice, and he’s a compelling prospect that fits all of the physical criteria required of a QB these days. But he threw 17 interceptions last season, and one thing the Patriots have prioritized in drafting quarterbacks is a knack for protecting the football. He’s going to be an interesting boom-or-bust pick for someone, but I can’t see it being the Patriots. Though there are no indications of any crab legs scandals in his past, Love makes too many Jameis Winston-type mistakes to be the Pats’ pick.

Remember the scene in the Belichick-Nick Saban NFL Films doc, when Belichick sidles up to Saban at Alabama’s pro day and asks him which of the myriad ‘Bama prospects is really the best? I suspect if he asked Saban that question this year, McKinney might be the coach’s answer. The versatile McKinney, who is a dependable tackler and cover man, had 95 tackles, 4 forced fumbles, 3 sacks, and 3 interceptions last season. With Devin McCourty and Patrick Chung both on the wrong side of 30 and Duron Harmon now with all the other expatriated ex-Patriots in Detroit, the Patriots could use a young, athletic safety. If they keep their pick at No. 23, I hope McKinney is the choice.

To me, the biggest mystery regarding the Patriots’ roster-building in the last couple of years is their neglect at finding a suitable young tight end. They knew Rob Gronkowski didn’t have a long shelf life during the 2018 season, and yet they did nothing to replace him or to find a successor. They still need to find one young tight end, if not two, in this year’s draft. Kmet, a well-rounded prospect, isn’t a first-rounder, but he would be a wise choice if the Patriots end up recouping a second-round pick in one way or another.

The notion that Belichick’s drafting causes a greater degree of difficulty for Belichick the coach is so tired, and I’ve heard it a few times this week in part because the Patriots still have several question marks from the past couple of drafts. Sure, like every other executive that puts together a draft board, he has misses; that in part is why he often tries to accumulate picks. There are no sure things in the draft, and having more picks sets up more chances to acquire talent. And he has acquired so much talent. Belichick has drafted Tom Brady — the greatest pick in the history of organized team sports — Rob Gronkowski, McCourty, Vince Wilfork, Richard Seymour, Julian Edelman, Jerod Mayo, Matt Light, Asante Samuel, Ty Warren, Deion Branch, David Givens, Dan Koppen, Logan Mankins, Ben Watson, Gostkowski, Eugene Wilson, Matthew Slater, Dont’a Hightower, Chandler Jones, Patrick Chung, Nate Solder, Shane Vereen, Marcus Cannon, Jamie Collins, Logan Ryan, Duron Harmon, James White, Jimmy Garoppolo, Trey Flowers, Shaq Mason, Joe Thuney, and Jacoby Brissett … among others. I mean, you can dwell on Ras-I Dowling and Chad Jackson, but I’d take every one of those aforementioned players on my team.

Prediction on the Patriots’ first-round pick, or where have you gone, Kenneth Sims?

I have two predictions: The Patriots will trade out of the first round, and drafting remotely is going to have more than few moments of technological chaos for several teams. I cannot wait until the Steelers go to make their pick and coach Mike Tomlin suddenly hears an old Patriots radio broadcast in his headset. 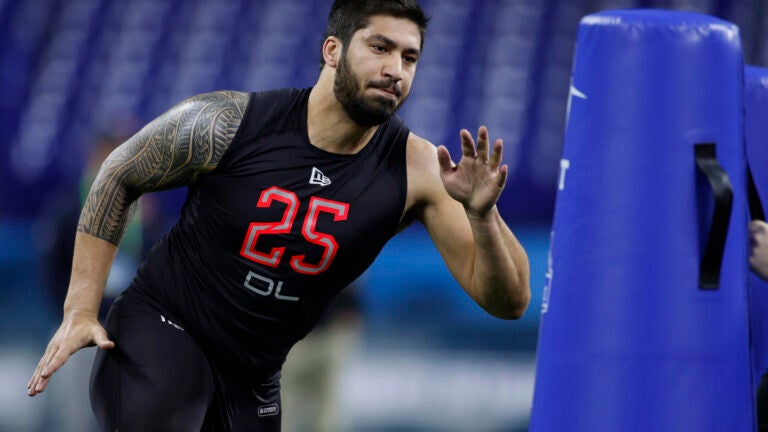 The Patriots need a boost on the edge. Here are 10 NFL Draft prospects who could provide that.