The NFL is scheduled to hold the 2020 draft this weekend, but it won’t look like any draft you’ve watched before.

Because of the coronavirus, the league will hold this year’s draft online, with teams using technology instead of person-to-person contact. Commissioner Roger Goodell will be announcing picks from his New York home, and 58 draft prospects will participate virtually, including LSU quarterback Joe Burrow, who is expected to be the first pick overall by the Bengals.

Here are all the details for this year’s draft.

This draft will be unlike any in the history of the National Football League. Because of local and national restrictions stemming from the coronavirus pandemic, the planned Las Vegas location was scrapped in favor of a virtual selection process that will see each team operate from a remote facility.

Teams will be in the hands of their respective IT professionals, and several teams have held mock run-throughs to test security and other aspects of their equipment. However, teams will still be able to hit the pause button at any point if there are technical issues.

As for the Patriots, they have 12 picks, tied with Jacksonville and Minnesota for second. Miami has the most, with 14.

It’s the second straight year New England has entered the draft with 12 selections. Last year, the Patriots started with 12 overall picks and used just three of their original selections to pick 10 players. Since the draft was shortened in 1993, the most picks the Patriots have used in a draft is 13 in 1996. They had 12 in 2009 and 2010.

Biggest areas of need for the Patriots

Quarterback: Maybe the Patriots are ready to roll with Jarrett Stidham, whom they selected in the fourth round last year out of Auburn. Or maybe they’ll add a veteran free agent. But if not, they may look to the draft.

Tight end: The Patriots never found a replacement for Rob Gronkowski last season, and have done little in the way of doing so this offseason. Still, this is not considered a deep draft for tight ends.

Wide receiver: There does appear to be considerable depth at the receiver position in the draft. The Patriots had three rookies on the roster last year, including first-round pick N’Keal Harry.

Interior offensive lineman: With center David Andrews hoping to return after missing all of last season, and guard Joe Thuney reportedly on the trading block, the Patriots may look to add depth.

Defensive back: While the secondary may be a strength for the Patriots, the personnel is not getting any younger. Devin and Jason McCourty are 32, as is Patrick Chung. Adding depth, particularly at safety, would appear to be a need.

What to watch for

Joe Thuney on the trading block? The Patriots slapped the franchise tag on the valuable guard, but reportedly have not made much progress toward an extension. The veteran could be shipped out as part of a trade that would shed salary as well as move the team up in the draft.

Watch for falling quarterbacks: LSU’s Joe Burrow appears to be the clear cut choice to be selected with the first pick by Cincinnati, although the Bengals could trade the pick. Beyond that it’s a guessing game.

Alabama’s Tua Tagovailoa is considered by many to be the second-best quarterback in the draft, but there are questions about his health after battling a high ankle sprain and dislocating a hip, which cut shot his final season with the Crimson Tide. Both injuries required surgery. Mock drafts have him going as high as No. 3, to plummeting to the late teens, leading to questions about whether the Patriots would move up should they see Tagovailoa start to slide.

Draft-day trades: The Detroit Lions, content with Matthew Stafford at quarterback, have made it known that they would be willing to part with the third pick, and would likely command a bevy of picks in return. Ditto for the New York Giants, who have Daniel Jones as their signal caller, and the No. 4 pick.

What the Patriots have done at 23 in the past

The Patriots have picked at No. 23 three times prior to this draft, and have fared well.

The left tackle played 14 seasons with the Patriots, starting 212 games and elected to play in six Pro Bowls.

The cornerback played 10 seasons with the Patriots, winning three Super Bowls. After playing an additional five seasons, he retired and was inducted into the Pro Football Hall of Fame in 2019.

The offensive tackle missed the entire 2018 season after suffering a torn Achilles. A toe injury sidelined him for much of 2019 before he was activated on the injured reserve list on Nov. 19 and started at left tackle the remainder of the season.

Patriots’ draft by the numbers

0: The number of trades the Patriots made around the 2004 draft. Since Bill Belichick arrived in New England, it’s the only year where he did not make a draft-related deal.

11: The number of quarterbacks the Patriots have drafted during the Belichick era (2000-present), beginning first with Tom Brady in the sixth round (199th overall) in 2000. For some perspective, only the Jets and Broncos have taken more (12). On the other end of the spectrum, the Colts have drafted the fewest quarterbacks in that time: four, including Andrew Luck.

17: The number of defensive backs the Patriots have taken with a top-100 pick since Belichick took over prior to the start of the 2000 season.

New England has picked in the top 100 on 67 occasions in that period. (The most? In 2009, the Patriots had six top-100 picks. The fewest came in 2007 with just one. While it’s important to note that every draft class is different — and priorities vary from year-to-year — New England has selected more defensive backs (17) than any other position when it has a pick in the top 100.

The Patriots have taken 13 defensive linemen in the top 100 in that time, nine offensive linemen, and seven linebackers. There have been seven wide receivers and six running backs. Tight ends and quarterbacks (four each) round out the group.

23: Since the birth of the franchise, the number of players the Patriots have drafted from Boston College. It’s more than any other school. Here are some of the other most-popular schools: Michigan (19 picks); Notre Dame (17); LSU, Miami (15); Florida, Georgia, and Arkansas (14); Alabama (13); Oklahoma and Arizona State (12); Penn State, Nebraska, Illinois, and Colorado (11).

24: The number of times since 2000 the Patriots have traded up in draft-day exchanges.

26: The number of times since 2000 New England has made draft-day trades involving players and/or future draft considerations.

27: The number of times since 2000 the Patriots have traded down in draft-day exchanges.

33: the number of defensive backs the Patriots have taken since Belichick became head coach. Defensive back has been his favorite draftable position. Defensive line and offensive line (31 each) are tied for second. In addition, there have been 22 linebackers, 17 wide receivers, 12 tight ends, 11 quarterbacks, 10 running backs, three fullbacks, two kickers (one, Owen Pochman, also worked sparingly as a punter), two long snappers, and two punters.

Locally, ex-Governor’s Academy standout Matt Peart could be a middle-round selection. The tackle out of UConn started all 48 games for the Huskies after redshirting his freshman year.

Peart is one of a handful of players with local ties who could end up getting drafted, including Boston College running back A.J. Dillon. See the full list here.

Per Chad Finn: All three days and seven rounds will be broadcast with a simulcast on ESPN and the NFL Network.

ABC will have a separate prime-time telecast for Rounds 1-3 on Thursday and Friday. The network will simulcast the ESPN and NFL Network telecast of Rounds 4-7 on Saturday.

All telecasts — originally scheduled to be on-site in Las Vegas — will originate from ESPN’s Bristol, Conn., studios in adherence to COVID-19 social distancing guidelines.

Hosts and what the network says will be a “limited” number of commentators will be in studio. Most reporters and analysts will contribute from their homes. Commissioner Roger Goodell will introduce the picks from his home.

The broadcasts will also feature a “Draft-A-Thon” that will pay tribute to healthcare workers and first responders in a variety of ways, including raising funds for the work being done to combat the impact of COVID-19. Funds will help support six national nonprofits and their respective relief efforts.

Suzy Kolber, Adam Schefter, and Chris Mortensen are among those who will also be prominent in the coverage.

Rece Davis, Jesse Palmer, and Maria Taylor will lead ABC’s prime-time presentation and will be in studio in Bristol. Todd McShay, Kirk Herbstreit, Desmond Howard, David Pollack, and Tom Rinaldi will be among the contributors. 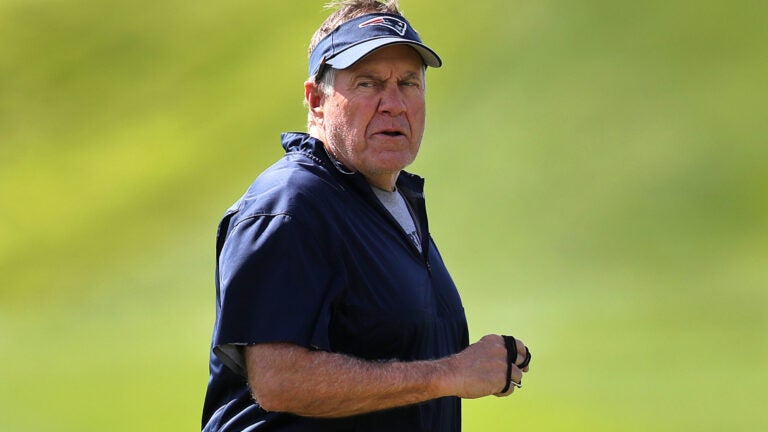 Here are the Patriots’ picks in the 2020 NFL Draft