The Patriots traded back on Day 1 of the NFL Draft Thursday night, sending their lone first-rounder — the 23rd overall pick — to the Los Angeles Chargers for a pair of Friday-night selections.

“It was a situation where we thought the trade made sense,” Patriots director of player personnel Nick Caserio said after the first round was complete. “I’m sure we’ll be active [Friday]. At some point, we’ll end up picking a player.”

Caserio said the team was prepared to pick a player before the opportunity with the Charges presented itself. The trade, according to Caserio, was not a direct response to anything that had happened in the draft, nor was it a pointed effort to bridge the gap between the team’s opening two picks. Prior to the trade, the Patriots did not have a second-rounder.

“Each situation that comes up, we look at it on a case-by-case basis, and we do what we feel is best,” Caserio said. “I don’t think we got into it and said, ‘Well, this happened, we’re going to do this.’ We don’t look at it that way.”

Thursday’s deal is the 78th time coach Bill Belichick has made a draft-day trade during his tenure in New England and the 27th time he has traded down. This year, however, the move was a little different because of the restrictions put in place as a result of the coronavirus outbreak.

With team personnel required to work remotely from their respective homes, Caserio, coach Bill Belichick, and the rest of the organization’s staff were not together at their usual draft day locale of Gillette Stadium. Still, the group experienced no technical difficulties in completing the trade.

“It went pretty smoothly,” Caserio said. “Look, the power could go out tomorrow and we could be doing faxes, but I’d say [Thursday] was pretty smooth.”

The second round begins Friday at 7 p.m. 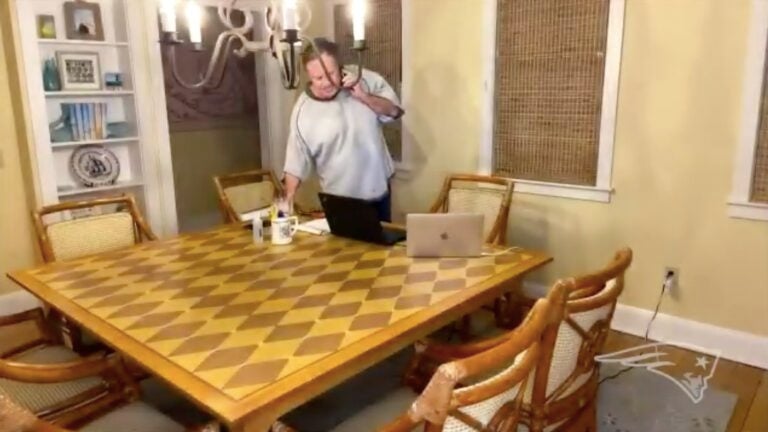 Live updates from the 2020 NFL Draft