We could not be certain how Bill Belichick would respond to life without Tom Brady, but we have watched him operate long enough that we should have known. The NFL draft has provided the first glimpse of how Belichick will try to perpetuate the New England Patriots’ two-decade reign atop the NFL without the player most responsible for six Lombardi Trophies.

How does Belichick move on without the greatest quarterback of all time? He acts exactly the way he did when he had him.

The first two days of the NFL draft showed Belichick is not changing – and certainly not panicking – now that Brady is in Tampa Bay. Many speculated the Patriots would use their draft capital to move up in the first round and steal Tua Tagovailoa. With the first pick of the post-Brady era, Belichick traded back to take a Division II safety. His quarterback bolted, and Belichick stayed on brand.

There was logic in connecting the Patriots to Tagovailoa, the Alabama quarterback Belichick’s brother-in-coaching-arms Nick Saban so highly regards. Many franchises who had just lost a star quarterback would have been tempted. But that’s not Belichick. He is too calculating, too beholden to how he values draft choices, and too confident in his evaluation of players inside his facility.

Belichick’s moves and choices suggested his franchise has been dramatically altered, but he’s still the same. They also provided further evidence of the Patriots’ desire to grant the first crack at replacing Brady to Jarrett Stidham, the quarterback out of Auburn whom they nabbed in the fourth round last year.

On Thursday night, holding the 23rd pick, Belichick traded out of the first round and picked up the 37th and 71st picks from the Los Angeles Chargers in a draft regarded as particularly deep. The move gave them five picks Friday night. With the second-rounder they got from the Chargers, they took Kyle Dugger, a safety from noted football factory Lenoir-Rhyne.

Belichick was not exactly sweating the proceedings. Just before that pick, ESPN’s cameras showed Belichick’s set-up at his home. Sitting in front of his computer was not Belichick, but a … dog.

With their four other Day 2 picks, the Patriots took players with little flash that fit their style: Michigan linebacker Josh Uche, Alabama linebacker Anfernee Jennings, UCLA tight end Devin Asiasi and Virginia Tech tight end Dalton Keene. Absent from those choices was a flier on a quarterback like Oklahoma’s Jalen Hurts (who went to the Eagles), Georgia’s Jake Fromm or Washington Jacob Eason.

To recap: In five picks, that’s a small-school safety, two versatile edge defenders and two tight ends. That is the platonic ideal of a Patriots draft.

The choice to bypass a quarterback reinforced the Patriots’ commitment to Stidham, an unknown commodity who many in NFL circles believe the Patriots prize for. Senior Bowl Executive Director Jim Nagy never bought the idea that the Patriots would trade up for a quarterback.

“I know how much they like Jarrett,” Nagy said earlier this week. “They love his work ethic, his intelligence, his arm. The kid’s got as much talent as anyone in this draft. He throws it better than a lot of these guys we’re talking about now. Really high-end arm talent.”

During his 18 years as an NFL scout, which included an extended stint with the Patriots, Nagy evaluated Matt Cassell, Brian Hoyer and Jimmy Garoppolo, quarterbacks the Patriots drafted and then went on to start for other franchises, with varying degrees of success. Nagy said he’d rate Stidham alongside any of them, even Garoppolo, who just quarterbacked the San Francisco 49ers to the Super Bowl.

If Stidham succeeds, teams will wonder how they let him slip to the Patriots in the fourth round. It vexes Nagy even now. Stidham was a five-star recruit coming out of high school. His college career included some bumps and concealed his talent. He transferred from Baylor after the school endured scandal, and he wasn’t a perfect fit for Gus Malzahn’s offense at Auburn. Still, Nagy remembers being awed at how Stidham performed when he watched him at Senior Bowl workouts, and he was stunned as Stidham fell in the draft.

Quarterback aside, this is a pivotal draft for New England. Their roster has deteriorated after several fallow drafts in recent years, evidenced by the lack of weapons around Brady last season and a defense that faded in the second half. The Patriots entered with 12 selections, and while Brady’s departure made it obvious, Belichick was always going to reshape his roster with this draft. The only question was how, and it was difficult to answer.

“It’s hard to peg Bill down, because he kind of tries to stay ahead of the league,” Nagy said. “Just because he’s got a profile, and that’s the way they built it around Tom, doesn’t mean that’s how they’re going to move forward.”

Day 2’s picks gave some clues. Despite the small-school pedigree, Dugger is regarded as an elite athlete who stands 6-foot-2, 220 pounds. He fits the profile of a versatile defender who can cover matchup-nightmare tight ends and running backs. That makes him the kind of defender needed to counter the Kansas City Chiefs, the defending Super Bowl champions. You wonder if Belichick had that in the back of his mind.

The Patriots maneuvered into their next pick, snagging Uche, an edge defender who fits how Belichick likes to scheme. He’s a hybrid who could play both defensive end and outside linebacker.

The Patriots watched 26 more picks come off the board, with Fromm and Eason still available. Would they take a possible Brady replacement? No. Another versatile defensive player from Saban’s Alabama: Jennings.

New England’s next pick would have come at 100th overall, but the Patriots swung a trade with Oakland to slide up to 91. Surely, this was a move to grab a quarterback, right? Ah, no. They took UCLA tight end Devin Asiasi. The Patriots desperately needed a tight end, having never really replaced Rob Gronkowski, and in Asiasi they got the second one off the board.

Having made four picks and two trades, the Patriots could have been content to regroup for Saturday. They made another trade, sacrificing a late-round pick this year and a sixth-rounder next year to swipe the Jets’ third-round pick, No. 101 overall. The two quarterbacks were still on the board. The Patriots instead took Keene, who — get this — is a versatile tight end who lined up all over the formation at Virginia Tech.

With that, the Patriots finally called it a night. They have seven more picks Saturday. They still could try for a quarterback to compete with Stidham, and if Eason or Fromm fall to them, it might be too much value to pass up. But that would be just the point. Belichick lets the rest of the NFL come to him, Tom Brady or not. When Brady left, so much about the Patriots changed. Plenty stayed the same, too. 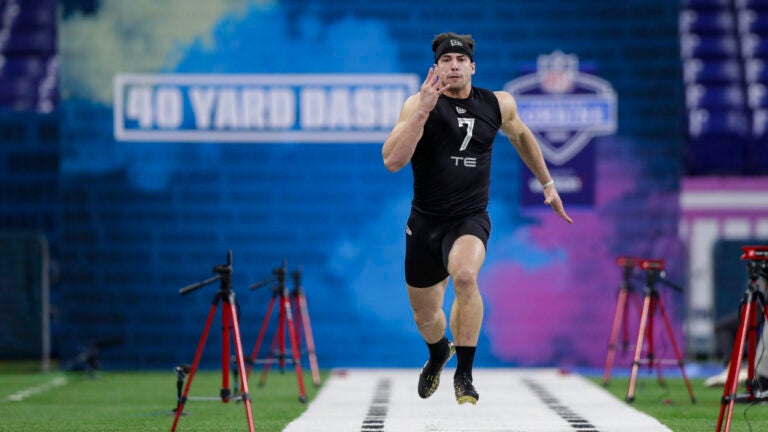