Undrafted free agent Brian Lewerke will be in the mix for the Patriots at the quarterback position, joining Jarrett Stidham, Brian Hoyer, and J’Mar Smith.

Thankful to have an opportunity with the @Patriots! Let’s work.

Lewerke, a two-time Michigan State captain, is 6-foot-2, 213 pounds, with 10 5/8-inch hands. The consensus is that his strengths are running the ball and throwing it deep, though he likely will have to improve his arm accuracy to become an NFL quarterback.

Here are four things to know about Lewerke:

He has multiple traits in common with Brian Hoyer.

In addition to having the same first name, Lewerke and Brian Hoyer are both undrafted quarterbacks out of Michigan State. They’re also the same height and just about the same weight.

Hoyer has appeared in 69 career games since 2009, starting 38 and carving out a role for himself as a backup.

Time will tell whether Lewerke’s career arc follows a similar path, but it’s clear he’ll have a mentor right away when he arrives in New England.

He broke an impressive record at Michigan State.

He threw for a whopping 3,079 yards as a senior, and threw 17 touchdown passes and 13 interceptions.

His sophomore year, he racked up 20 touchdown passes compared to seven interceptions.

He played through an injured throwing shoulder.

After a breakout 2017 season,  in which he led Michigan State to a 10-3 record, Lewerke injured his throwing shoulder in an upset win over Penn State in 2018.

He was ineffective in the second half of the year, according to MLive. Lewerke said the injury didn’t require surgery, and he rested his shoulder in the offseason before an up-and-down senior year.

He worked on his game with Sage Rosenfels.

He trained with Lewerke in early January and said he’s a “great athlete” with a “big arm.”

“We’ve made some small changes to his motion and drop,” Rosenfels wrote on Twitter. 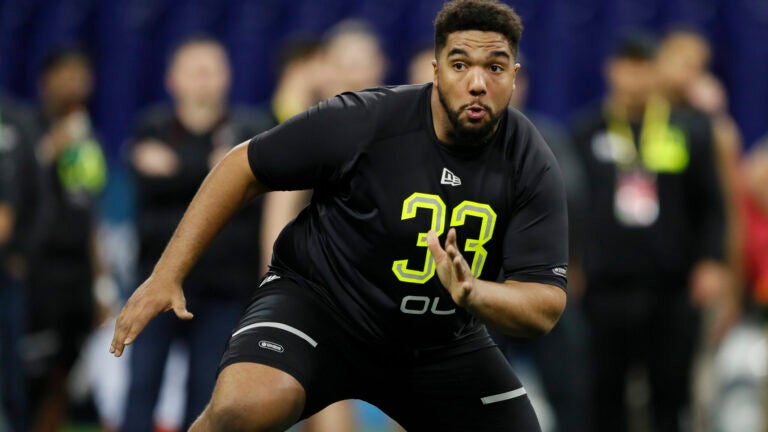