This isn’t a prediction. This is a promise.

Jarrett Stidham is going to be a very good quarterback for the New England Patriots, and it will happen this coming season (I know, if there is one) without much suspense or a significant learning curve.

We’ll miss Tom Brady, because he was Tom Brady. But we’re going to get used to having Stidham helming the Patriots offense fast, and for satisfying reasons.

It would not shock me — in fact, I’ll go ahead and predict it — that by season’s end, you, the reasonable fan, will prefer him over every other starting quarterback in the AFC East.

Skeptical? All right, then, I’ll borrow a warning of wisdom from those ‘90s musclebound philosophers Hanz and Franz: Hear me now and believe me later.

Or, with a slight paraphrase: Hear me out now, and he’ll make a believer of you later.

Everything Bill Belichick and the Patriots have done this offseason points to a belief in the 2019 fourth-round draft pick out of Auburn and his capability in handling the thankless job of succeeding the greatest quarterback who has ever played.

And I mean everything: from letting Brady leave for Tampa Bay, to bringing in respected backup Brian Hoyer as a backup/mentor, to passing on Jordan Love and every other quarterback in the draft, to showing no outward interest in Jameis Winston, Cam Newton, and Andy Dalton in free agency, to picking up a couple of tight ends in the draft, to bolstering the defense and suggesting they’re going to try to win in the same grind-it-out, conservative yet creative way they did in Brady’s early years, before he developed his superpowers.

No, this is not an indication that Belichick plans to tank for Clemson quarterback Trevor Lawrence this season. Belichick abhors the concept. Besides, he’s 55 wins from tying Don Shula, may he rest in peace, for the most regular-season wins in NFL history (328) and 43 wins behind Shula’s record (347) when playoffs are included. You know he wants to those records, and at 68 years old, there’s not a lot of time for rebuilding.

He’s going to try to win now, and win often, and he clearly believes he can do it with Stidham at quarterback. It might seem like he is going out on a limb, trusting a second-year player who was picked in the fourth round. Well, when Belichick seems to be going out on a limb, it’s because he knows more than we do.

It’s worth remembering that Stidham — who has a strong arm and moves well —  was a prospect with a major pedigree, a four-star recruit who was ranked higher than Lamar Jackson in the Class of 2015. He decommitted from Texas Tech after getting one look at Patrick Mahomes (a sign of good decision-making), bailed out of Baylor after that program under Art Briles proved beyond an Any Given Saturday-level of sleazy, and ended up finding success at Auburn, beating Alabama in the Iron Bowl as a junior, even if the offense wasn’t an ideal fit. Stidham was a first-round talent who ended up in the fourth round partially because he had an uneven senior year, but primarily because he got caught up in the machinery of college football.

Belichick’s belief in him is an encouraging sign given how the coach has handled the quarterback situation in the past. He’s been right at times when those of us on the outside thought there was reason to doubt what he was doing:

2000: Why is Belichick keeping four quarterbacks when it’s clear Michael Bishop should be Drew Bledsoe’s successor?

2001: Why is this Brady kid ahead of Damon Huard on the depth chart? Why is he coming in with Bledsoe hurt? Why isn’t Bledsoe getting his job back? (Don’t deny it; many of you felt this way.)

2002: How could he trade Bledsoe within the division? That’s going to haunt him.

2009: Why is he trading Cassel (and Mike Vrabel) for just a second-round pick? Cassel can play!

2014: Why’s he talking Jimmy Garoppolo in the second round when Brady needs more weapons?

2016: Why’s he taking Jacoby Brissett in the third round when he has Garoppolo?

Sometimes it’s helpful to remind yourself that Belichick and his staff know a heck of lot more than we do, to remember that he went 14-6 with Cassel, Garoppolo, and Brissett as starters when Brady was out.

While our first image of Stidham is of him throwing a pick-six on his first NFL pass against the Jets in Week 4, the Patriots have seen him for a year, on the practice field and in the meeting rooms. There’s a reason Devin McCourty and other Patriots veterans speak highly of him. They’ve seen him play well from the other side of the line of scrimmage.

His actions this offseason have made it apparent that Belichick has seen enough to believe Stidham can thrive if given similar responsibility to what Brady had in the beginning, 19 years ago: Play with poise and pace, protect the football (why anyone thought Winston would fit here is beyond me), lean on the defense and running game, but take the shots when they’re there in the passing game.

This is an exciting thing. There’s something there with Stidham that we haven’t seen yet, but Belichick has. Can’t wait for the rest of the football world to find out the hard way what that is.

Hear me now. You’ll believe in Stidham sooner than you think. 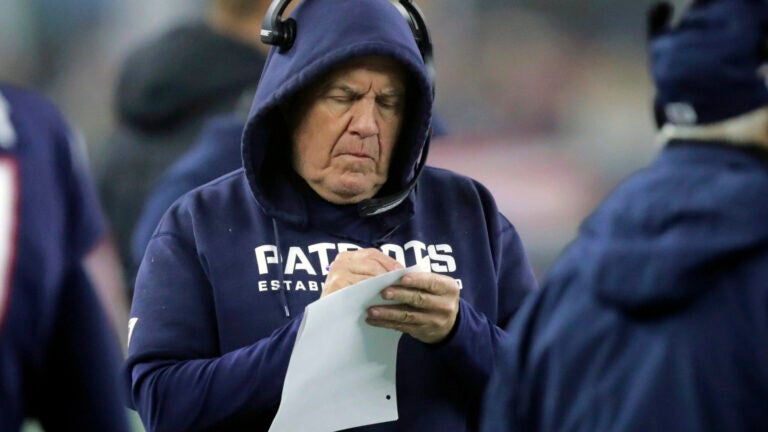 Big changes in AFC East, but Bill Belichick is the constant for the Patriots