Richard Seymour is poised to take his rightful place in Canton, Ohio, but before he picks out his gold jacket, he’ll make a stop in Foxborough to be fitted for a red one.

Seymour became the 30th member of the Patriots Hall of Fame Monday morning, beating out fellow finalists Bill Parcells and Mike Vrabel in a vote by fans.

The finalists were chosen after a lively debate and discussion last month by the selection committee made up of media and team staff.

Seymour, who has been a finalist for the Pro Football Hall of Fame the last two years, was the dominant defensive lineman of his era. Seymour was New England’s first-round pick in 2001 and played 14 seasons – the first eight for the Patriots. He is the second member of that class to be enshrined after left tackle Matt Light made the cut in 2018.

A three-time Super Bowl champion and first-team All-Pro, Seymour possessed an exquisite combination of size, strength, and speed. He had the ability to force running lane road blocks while also firing through gaps and applying constant pocket pressure.

Seymour had the versatility to play end in 3-4 looks and tackle in 4-3 schemes and was equally disruptive and dominant at either spot. His flexibility allowed New England to show multiple looks not only from game to game or series to series but from play to play.

Seymour made an impact on the Patriots defense as soon as hit the 508 area code.

“Literally from the beginning, he was dominant. And believe me, I know this because I had hands on view,’’ former teammate Tedy Bruschi told the Globe in February when asked about Seymour’s Pro Football Hall of Fame candidacy. “I played behind him and so I saw those offensive alignments, and just the destruction that he would create. And I would literally be smiling how easy my job was, because of playing behind him.’’

The induction ceremony is typically held in the plaza outside the Patriots Hall of Fame. The date and time of this year’s ceremony will be announced at a later date.

The Patriots started inducting at least one player into the team’s hall of fame each year in 2007. The process involves a panel of media, alumni and staff who collectively nominate the players or head coaches most deserving of induction. After the nominations were made on April 13, the committee voted and the three finalists were announced April 21. Fans then had until May to vote online to select this year’s inductee. 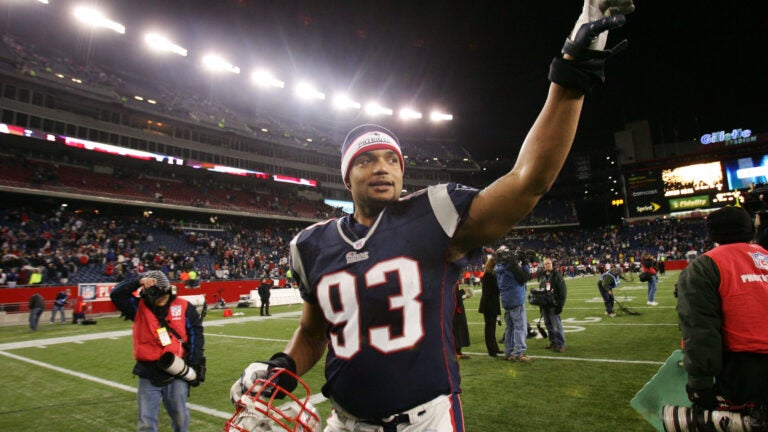