Adding young talent is a priority in 2020 for a Patriots organization looking to build depth and rework an aging roster. After selecting 10 rookies in this year’s NFL Draft, the team also signed 15 undrafted free agents to its roster.

Undrafted free agents are often overlooked when considering a team’s roster-building process during an offseason. But for the Patriots, who operate like a meritocracy when it comes to deciding who makes the team, being a UDFA does not put you at a disadvantage before you even take the field. All that matters is how you produce once you’re on it.

Here are the UDFAs with the best chance to make the initial 53-man roster for New England in 2020.

In this writer’s opinion, Bill Murray should make the team solely based on his name, but alas, Bill Belichick does not operate the same way. Still, the team clearly sees something in Murray, seeing as they gave the former William & Mary defensive tackle the second-highest guaranteed money and second-highest signing bonus out of their UDFA class.

Murray comes from a similar defensive scheme at William & Mary that is used in New England, and played primarily at nose tackle in college. With Danny Shelton leaving in free agency, the Patriots have just new signing Beau Allen to take reps at the nose tackle position right now, and Murray could provide depth at the position behind Allen.

A team captain as a senior, Murray is undersized at 275 pounds, but is light on his feet and very athletic for his position. What could help him in his quest for a roster spot is his special teams prowess: Murray blocked 10 kicks in his career.

That special teams experience could vault him over a player like Byron Cowart if the two players are neck and neck in the preseason. Cowart played just one special teams snap all of last season, and Belichick values players who can play on special teams.

If not for significant character concerns, Thomas would have been a lock to get drafted this year. But multiple suspensions in college at Miami, under both Mark Richt and Manny Diaz, are a red flag that scared teams off from spending draft capital on Thomas.

Thomas was suspended by Richt multiple times for team rules violations, and was eventually dismissed from the team in 2018, before being reinstated by Diaz for the 2019 season. Despite being given a second chance, Thomas still couldn’t get his act together, and was suspended for two games last season for an unspecified rules violation.

Maturity issues aside, Thomas is an NFL-caliber receiver who is best known for his ability in the deep passing game, despite being only 5’9”. He’s an explosive athlete with great body control, and excels at tracking the ball in the air down the field.

On top of his ability as a pass catcher, Thomas also has experience returning kickoffs and punts.

Thomas has obvious talent, but has failed to put it all together up to this point. After averaging 16.1 yards per catch in 2018 and amassing 563 receiving yards, Thomas’s numbers took a dip in his junior season in 2019, where he caught fewer passes (31) for fewer yards (379) and a smaller YPC mark (12.2).

If Thomas can grow up off the field, and return to his 2018 form at Miami, he could bring a speed element to the Patriots wide receiving corps that it currently lacks. But he is a big question mark until he can show that his team can count on him in any fashion. 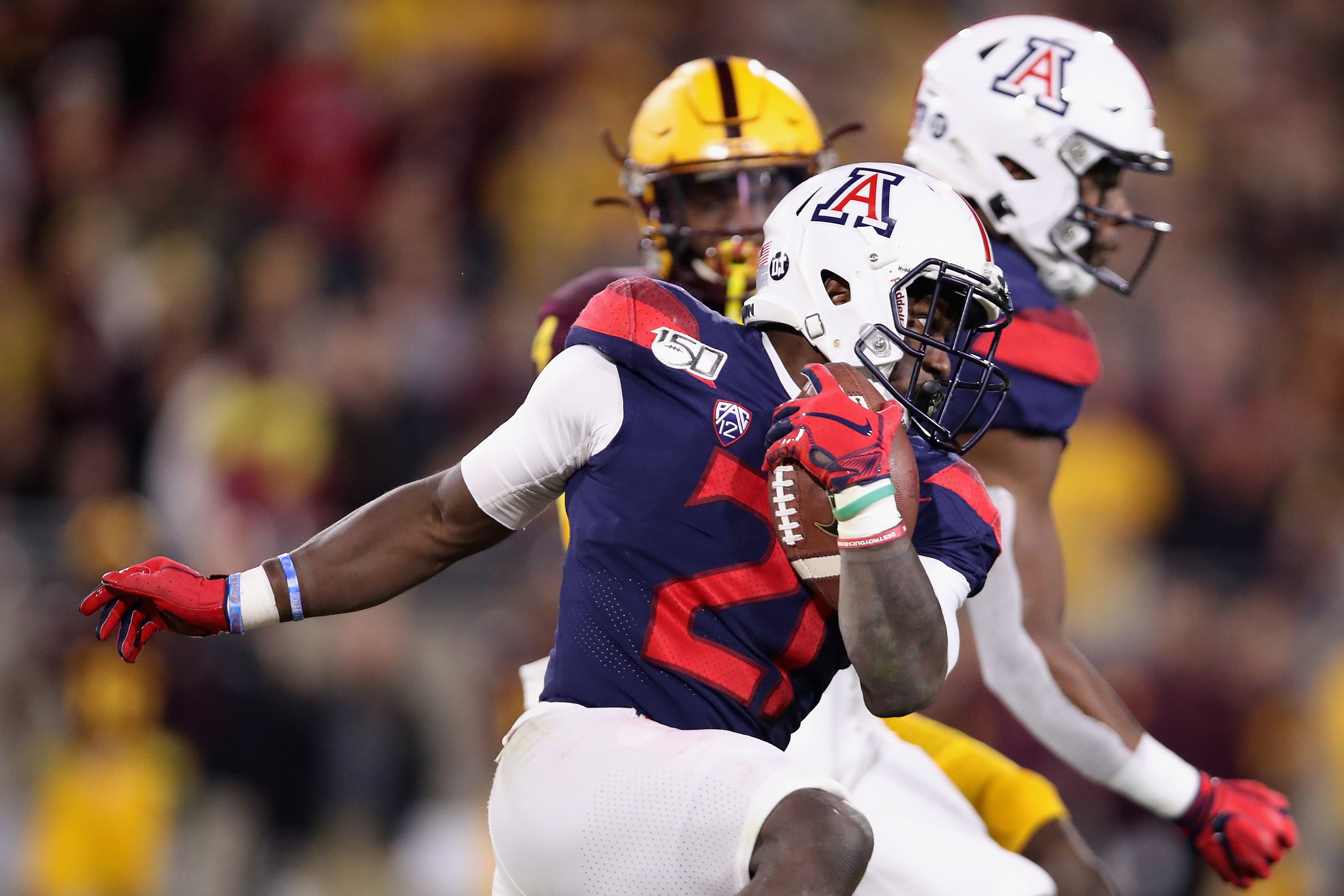 J.J. Taylor could fit the mold of a Dion Lewis in New England.

Don’t tell J.J. Taylor that, though. Make him angry and he might try and run you over on the football field, something that he looks to do a surprising amount, considering how small he is compared to a majority of his competition.

Taylor is a scatback in the mold of a Dion Lewis-type for New England. Taylor measured an inch-and-a-half shorter than Lewis, but otherwise tested very similarly to the former New England running back. Taylor ran a 4.61-second 40-yard dash, had a 9’10” broad jump, and a 34.5” vertical leap. Lewis, for comparison, ran a 4.60 40-yard dash, and had a 9’4” broad jump and 34.5” vertical.

Not only can Taylor dip, dodge, duck, and weave like Lewis, but he has a physical edge to his game that Lewis didn’t have. Pro Football Focus gave Taylor its “Most Fun to Watch” award for running backs in the 2020 NFL Draft because of his blend of physicality and finesse for such a diminutive player.

Despite running behind a bad Arizona run-blocking line, Taylor averaged 5.6 yards per carry in his career, and also forced 38 missed tackle and averaged 3.30 yards after contact per attempt.

With only five other running backs on the roster, Taylor has a very real shot at making this team, especially if one player goes down with injury. With Rex Burkhead and Brandon Bolden both being potential cap casualties in 2020, a strong summer for Taylor could lead to a spot on the 53-man roster.

The Patriots opted not to draft a quarterback in the draft, but added two UDFA signal callers in Smith and former Michigan State QB Brian Lewerke. With the team’s quarterback situation still unsettled, it makes sense to carry a third developmental quarterback in 2020, to provide depth behind Jarrett Stidham and Brian Hoyer.

Smith and Lewerke are both solid quarterbacks, but it’s Smith’s athleticism and arm talent that give him a higher ceiling, and thus make him a better fit as a developmental prospect to keep on the team.

The 2019 Conference USA Player of the Year, Smith completed 63.3 percent of his passes as a redshirt senior last season, and threw for 2,977 yards and 18 touchdowns. While he has an elite arm and moves well for his position, Smith’s mental grasp of the game is still lacking, and he will need to learn the finer details of the position if he wants to beat out Lewerke for a spot on the team.

While not a true dual threat quarterback, Smith does have experience executing zone-read options and run-pass options, and is comfortable operating outside of the pocket. His mobility and experience running the ball could make him a good fit to play the role of a Lamar Jackson or Patrick Mahomes on the New England scout team in 2020. His ability to allow the team to practice against a different kind of athlete at the quarterback position could give him a leg up on the competition for the third-string quarterback position in 2020. 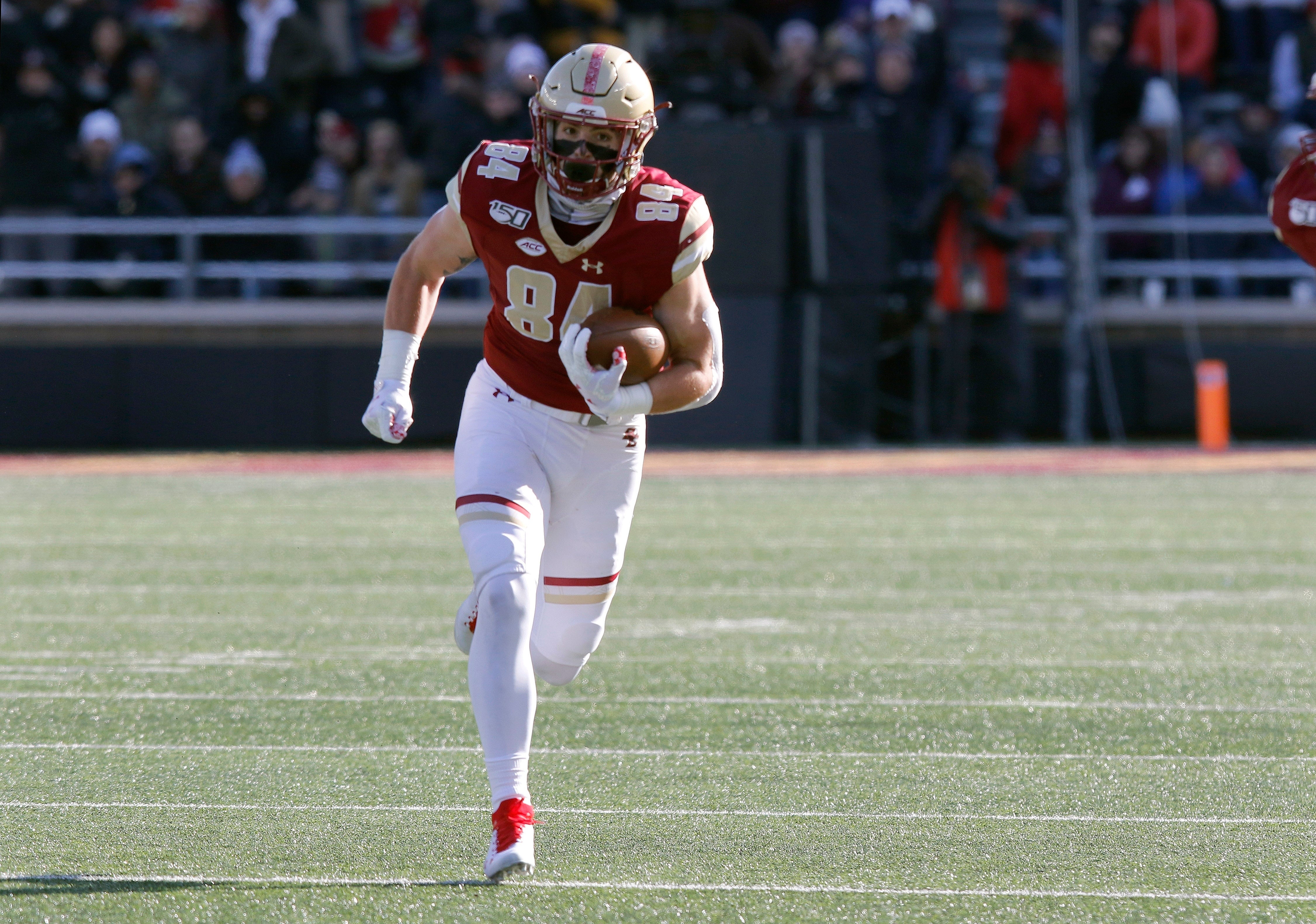 The Patriots announced they have signed 15 undrafted free agents