Maybe this shouldn’t be told, but I’ll tell it anyway. In 2014, when I was mostly writing on the Boston.com side of the yard, an executive type who long since has moved on requested that I write a column on a very specific subject: That the Patriots should sign Michael Sam, a star defensive lineman from the University of Missouri who was openly gay. Not for football reasons, he said, but because Boston was an open-minded place that would happily welcome him.

Boston was the perfect fit for an openly gay player? It would have been wonderful to say that is true, but I’d listened to too many hours of Neanderthal sports radio to believe that our skyline was entirely filled with colorful, welcoming rainbows.

I’m not that naïve, and I couldn’t write what I didn’t believe. Still. I did write something. I recall it as disjointed junk. The gist was that Sam, a terrific college player but an undersized and marginal pro prospect, wasn’t a good football fit for the Patriots, but it would be cool if he was. I can’t be totally sure how I phrased it because the piece never ran. The exec spiked it and wrote a column himself with the angle he wanted. The usual suspects in sports radio had a field day with that.

I bring this up now because at this moment, there is another ostracized football player searching for the right fit. He has been searching for three full seasons now, even though he long ago proved his worthiness in the league. And the place he should go to revive his career – the place that should give him that chance — has never been clearer.

The Patriots are the team that should do the right thing. They should sign Colin Kaepernick.

Now this, this I do believe.

There are football reasons for doing so. I’m a believer in Jarrett Stidham, but veteran clipboard-holder Brian Hoyer is the only other experienced quarterback on the roster, and he’s lost his last 10 starts. Skill-wise, Kaepernick would slot in nicely with this group, even though he hasn’t played since the 2016 season, when he threw 16 touchdown passes to four interceptions for a miserable Niners team.

The NFL has been trying to run out the clock on Kaepernick’s career since his de facto blackballing following the 2016 season for his decision to kneel during the national anthem to protest police brutality and racial discrimination. At some point, the shameful excuse that the NFL has been waiting for – he has been gone too long — will become a valid reason not to sign him.

But he’s still just 32 years old, five days younger than Andy Dalton, and it’s not yet forgotten that he’s an accomplished player, one who led the Niners to the NFC Championship Game in 2012 and the Super Bowl the following year. ­­­­­­­He played six seasons. His statistical comparisons through those seasons include Terry Bradshaw, Carson Wentz, Brian Sipe, and Doug Williams.

Kaepernick still owns the 24th-best passer rating in NFL history. He has a strong (if sometimes erratic) arm and he’s fleet of foot (he ran for 2,300 yards at a clip of 6.1 yards per attempt in his six seasons). I’d like to see what he could do in cahoots with Josh McDaniels in a limited role. He may not be a starter anymore, but there cannot be many better backups.

But this isn’t fundamentally about football. You knew that. It’s about doing the right thing. In the chaotic aftermath of the killing of George Floyd in Minnesota, people whose eyes weren’t already open are realizing the gravity of the point Kaepernick was trying to make four years ago. Yes, there were flaws in the delivery of his message – he never should have worn those socks depicting police officers as pigs, which gave his detractors a distraction that allowed them to distort his message. But his point was valid and important at a time when too much of America didn’t know or care to listen. It’s not that he was prescient. It’s that he was seeing the truth where others did not, could not, or would not.

The NFL’s recent statement on the nationwide protests of police brutality revealed hubris that would be stunning in its hypocrisy if it weren’t exactly what was expected. “The protesters’ reactions to these incidents reflect the pain, anger and frustration that so many of us feel,” commissioner Roger Goodell says at one point, practically sounding like he was the one taking a knee four years ago. I don’t know if he was surprised when NFL stars Patrick Mahomes, Odell Beckham Jr., Saquon Barkley, Deshaun Watson and the Patriots’ Stephon Gilmore were among those appearing in a video Thursday that demanded a revised and stronger statement from the NFL (Goodell released such a video Friday night, without mentioning Kaepernick). But he’s even more clueless than we think he is if he doesn’t already foresee the protests returning when the NFL season begins. He may have helped force Kaepernick out, but he’s not going to stop the social forces against his cold corporate indifference  now. For someone so image-conscious that he ordered teams not to speak negatively about the virtual draft, the blowback from players is going to make for a hell of a reckoning.

A wise first step for Goodell would be to cut the charade with Kaepernick and encourage teams to sign him, even if the gesture would be transparent and insincere. The Patriots should be that team not just for the aforementioned football reasons, but because there are few teams better equipped to handle the maelstrom that would initially come with a Kaepernick return. The Patriots have more respected veterans per capita in their locker room – Matthew Slater, the McCourty brothers, and Gilmore just for starters – than any team in the league. And you really think a “distraction” will hamper them? They brought in media star Tim Tebow, who was nowhere near the player Kaepernick was. They won a Super Bowl the season of Deflategate. A star tight end turned out to be a murderer. I’ve never seen another organization that knows better how to turn inward and, to borrow a phrase, do their job. 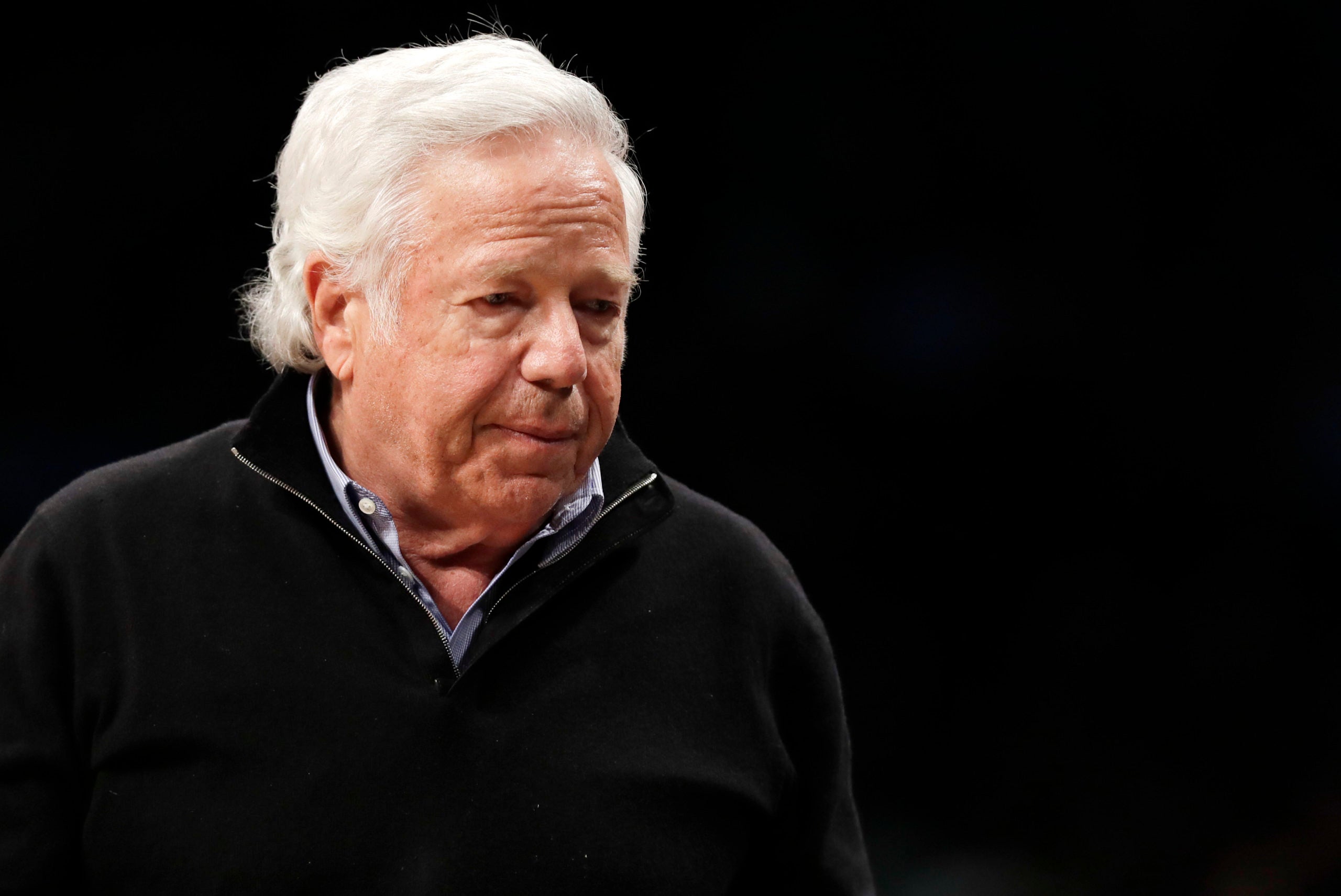 In this April 10, 2019, file photo, Patriots owner Robert Kraft leaves his seat during an NBA game.

Offering an olive branch and a playbook to Kaepernick would be the right thing for Robert Kraft to do, too. The Patriots owner has done some remarkable deeds lately, from auctioning off his Super Bowl LI ring for coronavirus relief to deploying the Patriots’ team plane to China to bring back 1.2 million masks at the start of the pandemic. Friday, his family pledged $1 million to organizations working to end systemic racism. The altruism is beyond admirable.

But Kraft does try to have it both ways sometimes, whether it was vowing to fight during Deflategate only to bow down to the league and leave Tom Brady fending for himself against Goodell’s minions, or remaining within President Donald Trump’s trusted (Kraft donated $1 million to help pay for Trump’s inauguration) circle years after he stoked the racial fires by referring to the NFL players kneeling as “sons of bitches.”

Kraft has authentic power. Often, he uses it for good. He has the chance to do it again here by signing Kaepernick.

He knows, like we all should know now and should have long ago, that the protests were never about the military or disrespecting the flag; those were misdirection plays by those uninterested in listening. It’s about wanting a safe, equal America for everyone.

It’s well past the time of just listening. It’s time to act, just as Kaepernick did four years ago, even when it meant putting his career at stake.

Don’t be complicit in running out the clock, Mr. Kraft. Sign him. Give him a real chance. Allow him to kneel on your sideline, because you’d better believe he is not going to be alone. Kneel with him. Reveal your compassion and your conscience.

Recite your familiar slogan: “We are all Patriots.” And then prove it. Sign a good football player who truly is one. 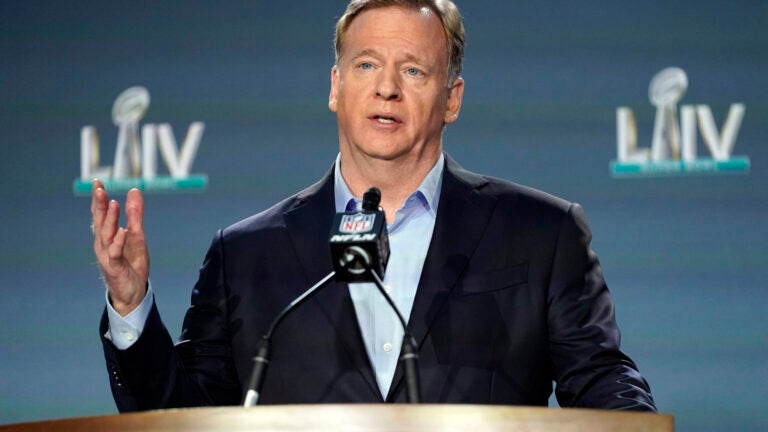 Roger Goodell says NFL was wrong for not listening to players