In an offseason that has brought plenty of change personnel-wise to the Patriots, it’s fair to expect that as the personnel shifts, so too will the scheme.

To gain a better idea of where the Patriots’ offense – and its use of the fullback – could be headed, Patriots fans can take a look at how the San Francisco 49ers deploy their Swiss army knife, fullback Kyle Juszczyk.

In addition to being a powerful blocker in the running game, Juszczyk also brings a unique pass-catching ability to the 49ers offense, making his unit more difficult for opponents to gameplan for because of the deception and trickery that San Francisco uses with Juszczyk on the field.

The Niners can use Juszczyk as a traditional blocking fullback, but can also deploy him in the slot, in tunnel screens, or on wheel routes out of the backfield.

In newly-signed Dan Vitale and fourth-round draft pick Dalton Keene, the Patriots now have two players who have similar profiles as Juszczyk, and can catch the ball and be a different kind of offensive threat than the recently-retired James Develin.

Keene, while drafted as a tight end, played all over the field as a Hokie, including at fullback and H-back, and excels in the open field with his run-after-catch ability. Like Juszczyk, Keene was used a lot on tunnel screens, misdirections, and wheel routes out of the backfield. While Keene could stick at tight end, he has shown the ability to play fullback well, and it wouldn’t be shocking to see him take snaps as a fullback in 2020.

The addition of two fullbacks (we are considering Keene a fullback for the purpose of this article) that have distinctly different skillsets than James Develin indicates a change in philosophy for New England at the fullback position. Here’s how the Patriots offense could evolve in 2020 with the increased use of the fullback position.

Breaking down the scheme

One of the favorite plays that San Francisco runs for Juszczyk is the tunnel screen, which also happens to be a play that Virginia Tech ran a lot for Keene.

The tunnel screen is a pass in which the receiver or running back lines up to the wide side of the field and opens up toward the quarterback after the snap for a quick screen pass. Other players on the wide side of the field run ahead of the pass catcher and serve as blockers, blocking to both the inside and outside to create a “tunnel” for the ball carrier to run through.

Here against the Rams, Juszczyk lines up as a fullback in an I-formation, and at the snap, runs at Clay Matthews coming off the edge as if he is going to block him. However, instead of blocking Matthews like a normal fullback would, he lets Matthews go by him, and instead turns to face Jimmy Garoppolo. With three blockers in front of him, and Matthews — the would-be tackler — behind him, Juszczyk takes the quick pass and goes for a big gain of more than 20 yards.

Here against Rhode Island in 2019, Keene lines up behind the left tackle as an H-back, and runs the same kind of tunnel screen. Virginia Tech uses jet motion to make the defense think the play is flowing to the right, but the quarterback pulls the ball back and looks left to Keene at the line of scrimmage. Keene shows good patience here in letting the blocks in front of him develop so he can gain a few more yards on the play.

On this play in the Super Bowl, the 49ers deceive the Chiefs’ linebackers with their do-it-all fullback. Here, in a traditional I-formation with Juszczyk at fullback, the 49ers show play action, and use the threat of Juszczyk as a blocker to get him open on a wheel route for a big gain.

As Juszczyk gets to the second level, the Chiefs linebacker near him is caught flat-footed, expecting to be blocked by Juszczyk. Instead, Juszczyk keeps running and flies by him for an easy catch.

This is an almost identical play to this play in the Raiders-Packers game in 2019, when Dan Vitale ran the same wheel route to get free on a play action pass for a 27-yard catch-and-run. Vitale lines up as a fullback in the I-formation, and catches the Raiders linebacker off guard, running past him when the defender was loading up to take on what he thought was going to be a block by Vitale.

Against Miami, Virginia Tech also used Keene as a decoy blocker. Lined up as an offset tight end, Keene shows as a blocker immediately after the snap. But as the play flows right, Keene leaks out and runs a shallow crosser the other way, catching the Miami defense off guard, and running in for an easy touchdown.

It’s a similar play to the one the 49ers run here, where Juszczyk motions from his fullback position to a spot on the line next to the left tackle as a tight end. San Francisco runs play action, and Juszczyk runs down the line of scrimmage initially, appearing to be looking for a defender to block. However, with the Chiefs’ linebackers all in the backfield, Juszczyk runs up the field and past the Chiefs’ linebackers for an easy touchdown.

While Dan Vitale isn’t the same caliber of fullback as Juszczyk, he did haul in three receptions of more than 20 yards last season, and has potential as a pass catcher in the New England offense.

On this play, Vitale is motioned into the slot by Aaron Rodgers, forcing the left defensive end to cover Vitale. Because of Vitale’s alignment relative to the defensive end, he automatically has outside leverage on his defender.

Rodgers hits Vitale on a short throw, and Vitale shows nice hands and downfield speed to pop loose for a 22-yard catch-and-run.

Having a versatile fullback like Juszczyk did wonders for the 49ers offense in 2019. The team averaged 9.96 yards per attempt on Juszczyk’s 24 targets last season, and also averaged a solid 9.7 yards per attempt when operating out of 21 personnel in 2019.

Juszczyk’s flexibility also allowed the team to scheme him open for easy completions from Garoppolo, which is something that New England could put an emphasis on if they start second-year quarterback Jarrett Stidham in 2020. Garoppolo had a 116.7 passer rating when targeting Juszczyk in the slot last season.

Vitale and Keene aren’t at the same elite level as Juszczyk is yet, mostly because they lack the same kind of physical run-blocking that the 49ers fullback also brings to the table. But their athleticism, pass-catching ability, and versatility on offense shows that New England could have bigger plans for the fullback position, and thus, the Patriots offense, in 2020. 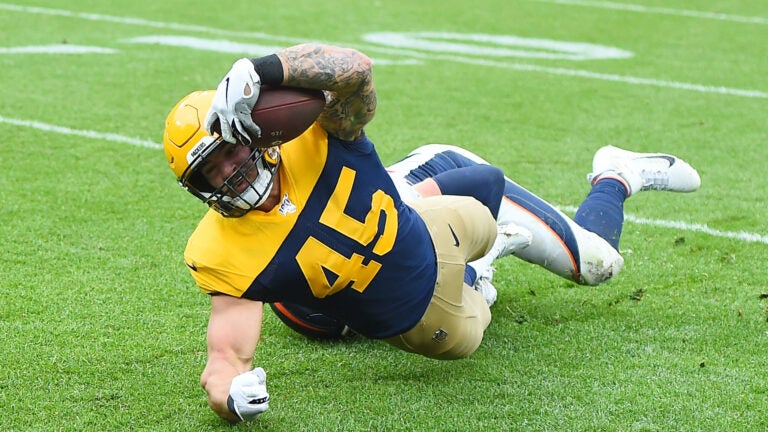