In an offseason full of constant chatter about the status of the upcoming NFL season, the Patriots gave the league and its fans something else to talk about, signing ex-Carolina Panther and former NFL MVP Cam Newton to a one-year minimum deal worth just over $1 million, with a chance to reach $7.5 million if Newton makes all his incentives.

The 31-year-old former No.1 overall draft pick by the Panthers in 2011 was released by the team earlier this offseason, ending a nine-season run with the franchise that saw Newton both win MVP and lead his team to the Super Bowl in 2015.

The Panthers released Newton with one year and $20 million left on his contract because of injury issues the past few seasons. The former Auburn quarterback suffered season-ending injuries in both 2018 and 2019, playing just two games in 2019 due to a Lisfranc fracture in his foot that caused him to miss the final 15 weeks of the season.

The last four seasons for Newton in Carolina were up and down as a result of his injuries, and he guided the team to an even 23-23 record, completing 59.6 percent of his passes and throwing 65 touchdowns and 44 interceptions.

The last time Newton was fully healthy, however, he dominated. And it’s that version of Newton that the Patriots will be hoping and praying they get in 2020.

Before suffering a shoulder injury in 2018 that required surgery, and led to lingering issues in 2019, Newton was spectacular, putting up a career-best passing DVOA (Defense Adjusted Value Over Average) of 13.2 percent that was by far the best of his career. For comparison, Newton’s previous best was 7.6 percent, when he was named league MVP.

So at age 31, what kind of quarterback are the Patriots getting, and how can Newton help shape the Patriots offense in 2020? The first hurdle to clear is a clean bill of health, but after that, the possibilities are tantalizing.

Newton is one of the most dynamic athletes in the NFL, and is as much a threat with his legs as he is his arm. Despite being a chiseled 6-feet-5-inches and 245 pounds, Newton can run well in the open field and has some shake to him. His speed and mobility as a runner bring an added dimension to the Patriots offense that neither Jarrett Stidham nor Brian Hoyer can offer.

Back in 2017, Bill Belichick spoke glowingly of Newton.

“I think when you’re talking about mobile quarterbacks, guys that are tough to handle, tackle, can throw, run, make good decisions – I mean, I would put Newton at the top of the list,” said Belichick. “Not saying that there aren’t a lot of other good players that do that, but I would say, of all the guys we play of have played recently in the last couple of years, I would definitely put him – he’s the hardest guy to deal with. He makes good decisions, he can run, he’s strong, he’s hard to tackle. He can do a lot of different things, beat you in a lot of different ways. We saw that in the game down there in ‘13, so I would put him at the top of the list. Not saying the other guys aren’t a problem, because they are, but he’s public enemy number one.”

What Newton’s running ability does

Before Newton signed with New England, we discussed how the Patriots offense could be undergoing an evolution in 2020. The addition of Newton only reinforces that belief, as Newton comes from an offense in Carolina that used a heavy dose zone read, run-pass option concepts, and a power-running scheme on offense.

Newton also ran a lot of play-action in Carolina when Norv Turner became the team’s offensive coordinator, something that is a key part of Josh McDaniels’s playbook as well. Newton’s ability as a runner lends itself well to a team that appears to be transitioning to a run-first power scheme. Having a quarterback that can run too adds another wrinkle for defenses to prepare for next season.

For Newton to make the transition into his 30s and regain his form from a few years ago, he will need to learn to protect his body. While his tree trunk of a frame allows him to absorb hits that most quarterbacks can’t afford to take, Newton can get too physical at times, and needs to learn when to protect his body as opposed to trying to run through (or over) a defender for a few extra yards.

Whether Newton will be as willing of a runner after his recent injuries remains to be seen, but expect New England to still use him in zone read schemes and RPOs a healthy amount, something he did plenty in Carolina.

Here, Newton reads the weakside edge defender to see whether he should hand the ball to Christian McCaffrey, or pull the ball and hit Torrey Smith on the short slant to his left. He sees the weakside linebacker come up to the line of scrimmage, leaving a window to hit Smith for the touchdown pass.

To see how the Patriots offense can look with a healthy Newton, one only needs to go back to when Jacoby Brissett started for the Patriots during Tom Brady’s suspension in 2014.

While Brissett isn’t the athlete that Newton is, he still is more mobile than Brady, and the Patriots’ offense with Brissett under center looked markedly different against the Texans in 2014 than it did with Brady as the starter.

Here, Brissett fakes the handoff to LeGarrette Blount, and with the defense following the flow of the play to the strong side of the formation, Brissett peels off with the ball and runs free for the touchdown. It’s a play reminiscent of this one in 2018 for Newton, where he faked play action and ran the QB keeper into the end zone with most of the Bengals’ defenders still looking for the ball in the backfield.

The triple option was also used against the Texans with Brissett at quarterback, something that Newton has done in the past as well.

The play here goes for a minimal gain, but with a greater threat to run at the quarterback position with Newton, this concept will be much more potent, like it was here, in 2012 against the Saints.

What about the passing game?

As a passer, Newton is a little more volatile. Newton has a reputation of having a strong arm, but poor throwing mechanics directly contributed to the shoulder issues he has had in recent years. Newton is an on-time passer who can make a variety of throws, but lacks touch and accuracy at times, in part due to inconsistent mechanics.

Newton is an “arm thrower,” meaning he doesn’t engage his lower body to generate more torque during his throwing motion. On this play, Newton zips a throw to his receiver on a deep out route. However, Newton opens his hips too early, and is somewhat off balance when he makes the throw. Throws like these put undue strain on a quarterback’s arm, and while the end result is fine, can lead to injury, like Newton has subsequently experienced.

Same issue here, as Newton fades back and to his left on this throw. Newton’s dynamic athleticism allows him to get away with these plays, but over the course of several seasons, these poor mechanics can become a bigger issue. For Newton to play well into his 30s, he must develop more consistent, sound mechanics when throwing the ball.

A wild card in the signing of Newton is his ability to learn the playbook in an offseason that has already been drastically shortened due to the coronavirus. Newton is coming from a numeric system in Carolina, to a concept-based offense in New England. Whether Newton can nail down the complexities of Josh McDaniels’ playbook quickly enough to beat out Jarrett Stidham and Brian Hoyer in an abbreviated preseason will be something to watch, and is no given thing.

Still, signing Cam Newton elevates the ceiling at the quarterback position for the Patriots significantly, and gives the team much more flexibility on offense to get creative with its running game. While he isn’t the accurate passer that Tom Brady was by any stretch of the imagination, Newton brings an element to the Patriots offense that New England fans haven’t seen before, and is a great fit for a team that is transitioning to a scheme-flexible, run-first offense in 2020. If Newton can clean up his mechanics, protect his body, and learn the Patriots’ offense quickly, New England could be a bigger threat with Newton as quarterback than it was with Tom Brady last season. 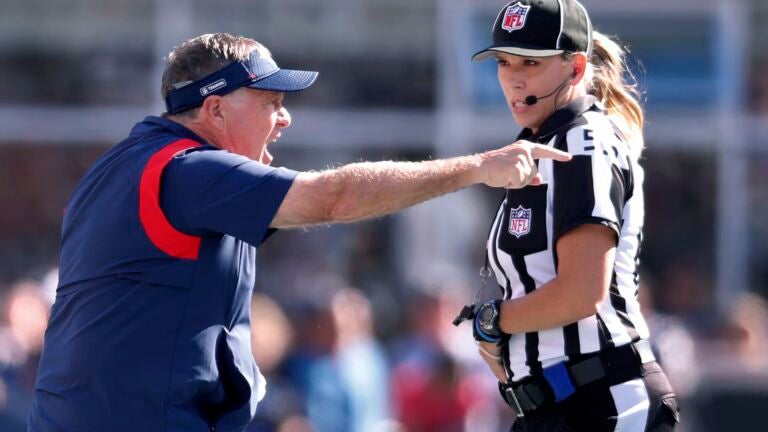 Patriots loss to Saints was a rare debacle for Bill Belichick era, and other things we learned