On Monday morning, Washington’s NFL team — after years of pressure from activists and a recent stand made by sponsors — announced that it will no longer use a racial slur as its nickname.

The team’s new name has not yet been revealed, though fans and players have been developing a list of candidates.

The McCourty twins shared their thoughts on COVID-19 and the fight for social justice: Devin and Jason McCourty penned a guest column for Sports Illustrated’s The MMQB. Published on Monday, it provided a glimpse into the feelings of the two Patriots players regarding the dominant issues of 2020.

On COVID-19, they initially mirrored other football players who were content to quarantine in March and April (the usual months of the NFL offseason). Yet with training camp drawing closer, they are starting to wonder what the 2020 season will look like.

“Now, here we are in mid-July, and every player is thinking about football again,” wrote the twins. “So, what exactly does the 2020 NFL player look like?”

Here are three takeaways from their column.

1. They luckily weren’t quarantined on a Disney cruise ship.

Explaining their own experience with the coronavirus pandemic, the two members of New England’s secondary noted how they took a Disney Magic cruise in the offseason, but that it finished on March 5, just before the lockdowns began.

“A week later, there were cruise ships all around the world being quarantined at sea, not knowing when they’d be allowed out of the water.”

And as longtime NFL players with families, they soon discovered just how different this offseason would be.

“COVID-19 crippled our world and we are still in search of normalcy in this totally new environment,” Devin and Jason explained. “As NFL veterans of over a decade, we quickly found out that our offseason would be the furthest thing from normal. The realization that things were different first occurred during virtual meetings, when one of your kids could come running into the room dressed as Spiderman shooting webs at you.”

2. The NFL is in an unprecedented offseason.

For fans who might not be aware of the league’s usual procedures, Devin and Jason tried to illustrate some of the basic challenges. One of the greatest difficulties currently are for players just entering the league.

“Imagine being a 2020 NFL rookie who will start training camp without visiting his playing city or team facility at all,” they wrote. “They’ll walk into the building on day one, not knowing where the cafeteria is, and have to trust that the things they learned virtually will place them in the right spot when the real practices start.”

On a wider level, players remain unsure of what the league’s near future will look like.

“As the days roll past in July, every NFL player is scrolling through Twitter, finding out news about the upcoming season, wondering if there will even be a season. So many questions with virtually no answers, all three weeks removed from a potential start to training camp.”

Just as they have done in previous discussions about the 2020 season, the two Patriots are siding with a more cautious view of football in the greater context of an ongoing pandemic.

“We preach player safety as being the foundation of our game all the time,” they said. “Well, there’s no better time than now to make sure that is at the forefront of everything we do.”

“But we have reached a point where there is no guidance, there is no wily old veteran to look up to when it comes to the circumstances we face today.”

Along with COVID-19, the other major story of 2020 has been the campaigns against racial injustice and police brutality.

“We all witnessed the horrid killing of George Floyd,” wrote Devin and Jason. “The country went from a full standstill to an all-out uproar.”

Regarding player activism, they expect to see kneeling during the anthem before games, and greater efforts off the field.

“The 2020 season will most likely feature men kneeling during the national anthem for the first time — some players and possibly coaches. We’ll also see more players writing op-eds, testifying at state houses and working in a number of other ways.”

“Maybe Ben Watson will be inspired by Kanye West and add his name to the Presidential race,” they added. “Ben: You would have our votes. If you just want to see guys play football, 2020 might be the year to take a break from the NFL. Guys have a burning passion for change, and nothing will get in the way.”

Ultimately, the McCourtys concluded that the “verdict is still out” on the many questions confronting NFL players in 2020. They — like NFL fans — continue to watch for answers.

Trivia: Who was the last NHL player to play in an official game without a helmet?

Hint: He was drafted by the Bruins in 1978 and won the Stanley Cup with both the Oilers and Rangers.

Says the team is in constant communication with both of them, look forward to their return

The Palace at Auburn Hills in Michigan was demolished on Saturday: The venue was the site of numerous classic games between the Celtics and Pistons over the years.

On this day: In 1951, Red Sox pitcher Mickey McDermott pitched a staggering 17 innings in a 5-4 loss to the White Sox. The game, which Chicago won by scoring three runs in the bottom of the 19th, came one day after the two teams had played another marathon (requiring 17 innings) where the Red Sox had recorded a lengthy victory of their own, also by a 5-4 score.

McDermott would pitch in another incredible start later that July, going 16 innings in a complete game 8-4 win over Cleveland. 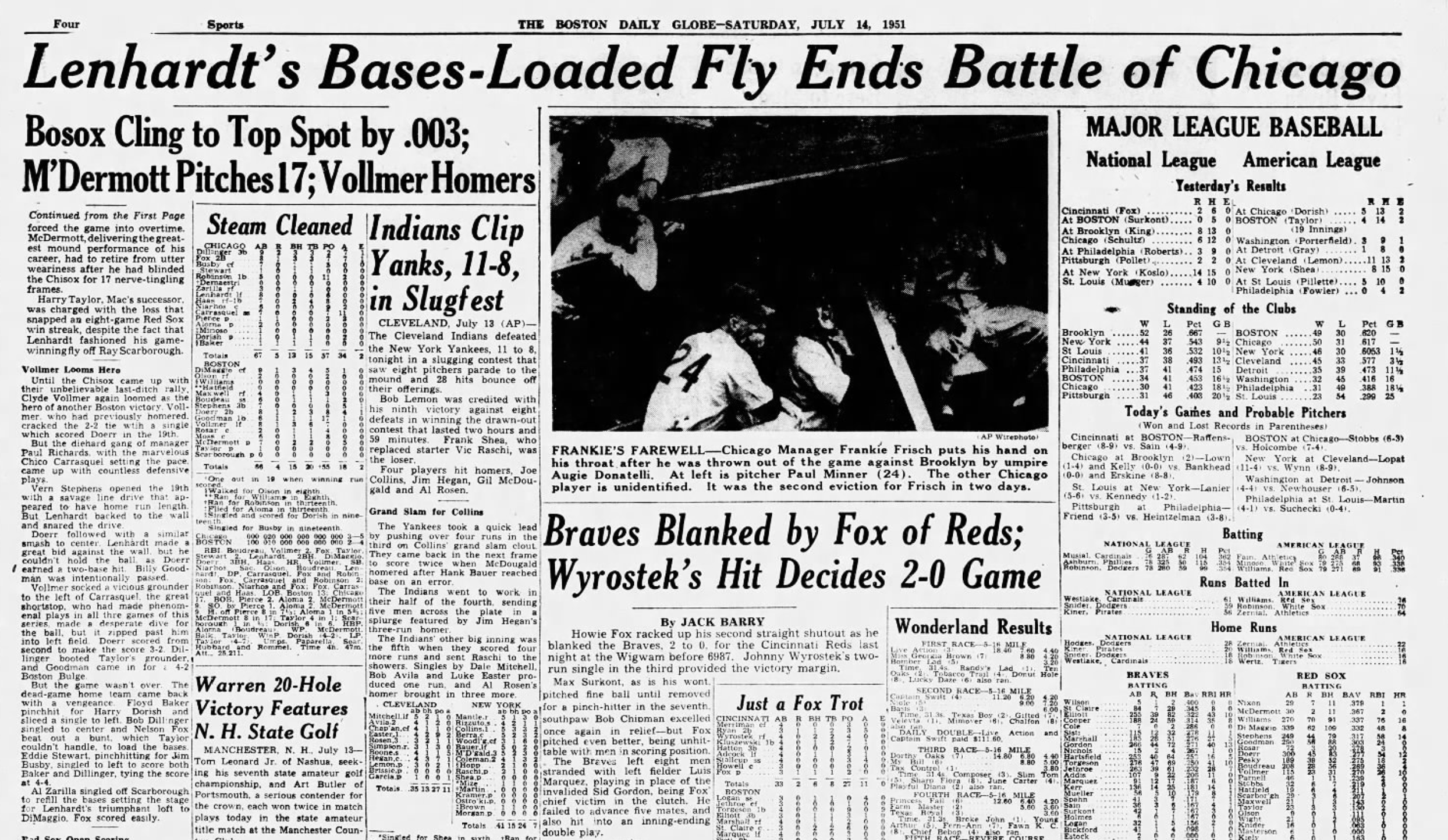 How a fascinating first round of the NFL Draft unfolded