Tampa Bay Buccaneers quarterback Tom Brady has no harsh feelings toward his former team. As Brady puts it, his decision to leave the Patriots was truly a matter of wanting “to do something different.”

In an interview published Monday with NBC Sports’ Peter King, Brady detailed his thought-process for leaving.

“I made a decision to do something different,” he told King last Thursday, just a day before the Bucs’ first training camp practice. “It was a very thoughtful decision. It wasn’t a spur of the moment thing. Really since the moment I got here they’ve embraced me. They’ve embraced me with the opportunity to go and lead the team—that’s a big responsibility for me.”

Brady said that he weighed all his options, writing down 2o or so different things that were important to him when looking at a team.

“When I added it up, Tampa seemed like it was a great opportunity,” he said. “If I think back at the decision, I am so happy with the decision I made.”

He also admitted that he left the Patriots on good terms.

“I spent 20 years in one place,” Brady added. “I left on great terms, and I have so much respect for everybody in that organization.”

Still, his decision to leave did cause opinions to circulate, specifically about whether, at 43-years old, he could still compete “like his old self” on a team that was 7-9 last season. Brady took the time to address the critics, but reiterated that his own opinion of himself is what matters most.

“Everybody’s got an opinion about a lot of different things,” Brady said. “My opinion is the only one that matters to me. In the end, you can prove them wrong or prove them right. For me, I’ve got the opportunity to go out there and play and I’m going to make the most of it and do what I’ve always done.”

With that, Brady did say that his throwing arm feels as good as ever.

“I feel really good. I think my arm is strong and is good and is as in-shape as it has ever been,” he said. “I think every offense demands some different things and everybody has a different belief on how to move the ball downfield and score points. Again, being in one place and you have that familiarity, which is why I think continuity in the NFL is so important.”

After the Bucs’ first-padded practice on Monday, head coach Bruce Arians offered his own observation of Brady’s performance so far. In his opinion, Brady has still got it — he just needs to get used to the Florida heat.

“The 7-on-7 is what it’s supposed to look like — completion after completion. In the blitz drills, he’s seeing how we call it, how we protect it. He’s doing a real good job with his hots and sights. He’s right where he needs to be. I’m not worried about him.”

“He’s probably in ‘New England shape’ right now,” Arians joked. “He’s not ‘Florida shape.’ The heat’s kicking his ass pretty good. It’s different, man…We laughed about it out there today — I don’t think he’s ever sweat that much in his life. It takes a little time to get into the Florida shape, but as far as playing in a game, he’s more than ready right now.” 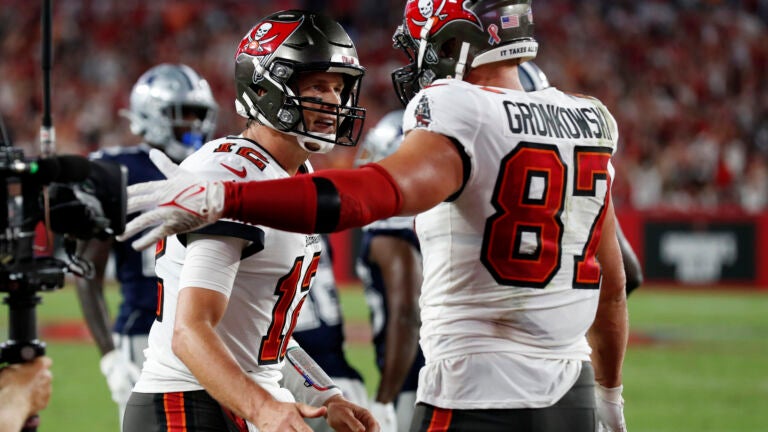