FOXBOROUGH — Kyle Dugger got his first taste of playing inside Gillette Stadium as the Patriots held a walkthrough with game-like simulations Friday afternoon.

The Patriots top pick (second round) in April’s draft took it all in as the club wrapped up its second week of training camp. The big, athletic safety started camp with a bang before being slowed by an undisclosed injury.

“It’s indescribable,’’ he said after practice in his first chat with the media since draft night. “It’s a great feeling — a real blessing. Just being out there is so joyous, and I love being able to be out there and touch the field and play the game. It’s really indescribable.’’

Dugger’s start had several veterans — including Devin McCourty — excited. It was clear he was ready to play from the get-go, eager to play football after the weirdest of offseasons.

The injury was frustrating for Dugger because he wasn’t “able to get out there with the team and grow with them,” though he appeared to be moving freely Friday.

Dugger, who figured to be in mix for the safety rotation, could be thrust into a larger role considering Patrick Chung’s opt-out and Dugger’s own unique skills.

At 6 feet 2 inches and 220 pounds, Dugger has the size and strength to defend the run but also the athleticism and coverage skills to blanket both tight ends and backs.

Dugger credited the club’s coaches and veterans with helping him understand the concepts with playing closer to line of scrimmage to help with run support.

“[They] have been huge for helping me understand the box and differences [of playing there],’’ he said. “Really just the confidence is coming [along] quite well because of that, specifically.’’

Versatility is a quality the Patriots covet in their defenders, so Dugger wants to get to the point where he is proficient at both free and strong safety.

“Obviously the more I can do the better,’’ he said. “Like I said, the veterans and coaches have been huge in helping me get a feel for both spots. I can’t say what I feel more comfortable doing [yet], but I want to be comfortable doing both equally.”

Michel gets up to speed

Sony Michel missed the first week and a half of training camp as he recovered from a foot injury but has been off and running since returning to the field Wednesday.

“I’m feeling good — It’s just a blessing that I’m able to get back on the field,’’ he said. “I’m just working hard and doing what I have to do to sustain that.’’

The third-year back isn’t dwelling on the past.

“You really can’t make up for lost time,’’ he said. “All I can do is look forward and just build it from here … just kind of string along good days.’’

Michel’s absence created more opportunities for second-year back Damien Harris and he took advantage, looking crisp as a runner and receiver through the early practices.

Michel is excited about competing with Harris.

“He goes out there and just runs hard and it’s going to push me to run even harder,’’ Michel said. “Him going out there and making plays would benefit the team and [I want to do] whatever I can do to come in and do the same thing.’’

Helping Newton get tuned up

The Patriots pumped in some crowd noise and music to help the atmosphere during the walkthrough and receiver N’Keal Harry was impressed with how Cam Newton adjusted. “Cam did a good job getting the calls to us, making sure we could hear everything,’’ he said. “If it does get too loud, we have other methods to help us work through that.’’ … Regarding the “Doughboy” nickname Newton gave Harry, the receiver said the quarterback gives everybody nicknames. “It’s all jokes … It’s all love at the end of the day.’’ … The Patriots released undrafted rookie receiver Will Hastings, who had been limited a good portion of camp. 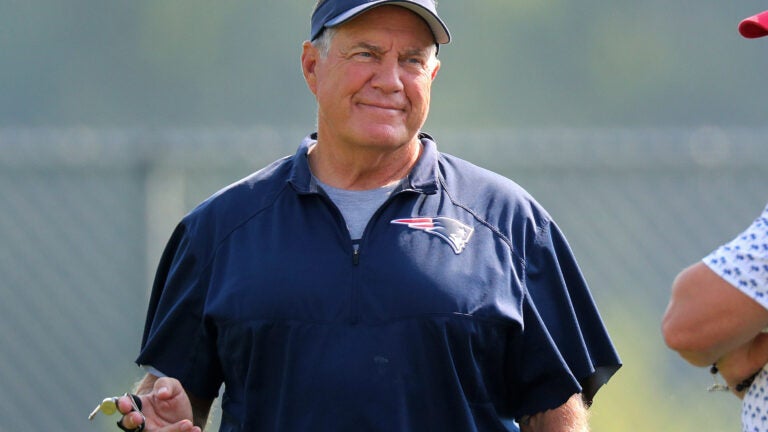 Bill Belichick weighs in on pass interference in college vs. the NFL