When asked how it felt to lead his newest teammates in the “heat” of the game against the Dolphins, Patriots quarterback Cam Newton wanted to make one thing clear: his performance on Sunday is what everyone should expect from him.

“This is the new normal,” Newton said in the postgame press conference after defeating the Dolphins, 21-11, on Sunday. “I think it’s time for everybody, including myself, to realize this is what it’s like. I think it hit me full circle today and for me to realize that I’m a New England Patriot and I’m just going to embrace this whole moment.”

Against the Dolphins, Newton made his presence known — specifically, he showed how effective his running can be. In the second quarter, he ran for a four-yard touchdown to give the Patriots a 7-0 lead  — while also paying homage to the late Chadwick Boseman afterwards.

Then, in the third quarter, he scored a second rushing touchdown off of an 11-yard run. He then handed the ball off to center David Andrews, who delivered a celebratory touchdown spike.

“Dave is a person who was kind of in my boat, a person that’s been out of football,” Newton said about giving the ball to Andrews. “For him to enjoy that, just as much as I’ve been a witness of how much he works and his whole presentation of how he shows up each and every day, how he practices and he was the first person that I saw.”

“I knew he would enjoy that,” he added. “A lot of times, having your hand on the ground — you don’t necessarily get the recognition you deserve, but none of what happened for me today would have happened without those big guys up front.”

Newton — who finished the game with 15 carries for 72 yards and two touchdowns — now has 60 career rushing touchdowns.

Off the bootleg, @CameronNewton takes it in for his 2nd rushing touchdown of the game! #GoPats

Earlier in the press conference, Newton reiterated the same points that offensive coordinator Josh McDaniels expressed earlier last week that the team — despite having an unconventional preseason —  was going to have to prepare for “different scenarios and situations” against a team like the Dolphins.

“One of the coaching points for the game was to be accessible to in-game adjustments, and that’s what it pretty much came down to. Getting a win like that, that’s not necessarily pretty at times, that’s good for the overall team character. I think we just got to keep building from this.”

Newton then praised McDaniels for being “transparent” as a coach, which he felt like made their player-coach relationship prove effective on the field.

“It was relatively picking up right where I remember the game to be, so to speak,” Newton said when asked about the win. “I think it was just a fulfilling process, more so for me as well as Josh [McDaniels], Coach Bill [Belichick] as well as Jedd [Fisch], to understand who they have and what I have. All in all, obviously Josh has been calling plays the same way for a long time, so now, knowing the dialogue we had on the sidelines was unbelievable. Just him being transparent, as well as myself being transparent on how we can attack this defense.

“They had a lot of things that we went over and they tried to disguise a lot, but at the end of the day, we made the adjustments and executed.”

While not every play was perfectly executed for the Patriots, such as when wide receiver N’Keal Harry made a costly fumble in the third quarter, Newton said mental toughness is important in those situations.

For instance, a fourth down conversion by Newton in the fourth quarter led to the Patriots regaining momentum with a 1-yard touchdown by Sony Michel.

“That was big,” Newton said of the play. “Coach Bill always talks about being mentally tough and we didn’t blink. At the end of the day, we knew it was favorable for us to be mentally tough in that situation and not allow a moment to be too big for us. … I’m just glad those guys trust in me to have the ball in my hands in that particular situation and for the offensive line to sell out like they’ve done man, not just today but over the last couple of weeks. We’re just becoming a very tight knit group.”

Another tough moment for Newton came after the game, in which he was spotted arguing with some of the Dolphins players.

“It wasn’t nothing,” he said of the scuffle. “It was a competitive game on both sides. You just have to realize who you’re talking to and just keep everything in the game. I realized I was talking to a person that’s known for doing splits, so, that wasn’t characteristic of myself to keep going back and forth. But yeah, at the end of the day, it’s football. For me, no matter who it is, I play with a competitive edge and I expect the other team to play with a competitive edge as well. … Anything outside of that is just all about respect. I don’t disrespect nobody, and I wouldn’t want anybody to disrespect me, but yet, at the end of the day we got the thing that was most valuable today and that’s the win.”

Newton claimed that the Dolphins were trying to take his gold chain necklace off, which he reassured reporters is still in tact and with him. He did admit, however, that incident bothered him a bit.

All in all, Newton expressed his gratitude to the Patriots organization for giving him the opportunity to suit up for them.

“I’m just so blessed to have this opportunity to number one, be affiliated with an organization. Knowing that, in itself, is a blessing and to get a win, that’s another added plus. Yet, through it all, this has been a strenuous, long process for me and yet, it’s just been gratifying. I’ve just had a sense of gratitude to the New England Patriots and to this team, just to give all that I could possibly give.” 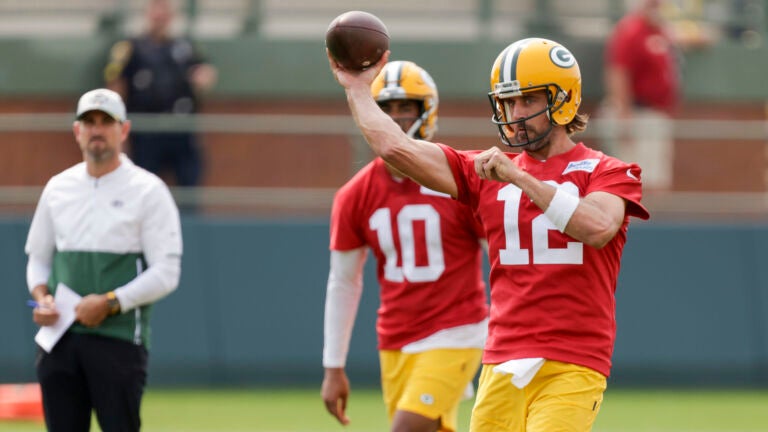