The Patriots defeated the Dolphins 21-11 in the season opener on Sunday. The game was played without fans at Gillette Stadium, an atmosphere Bill Belichick succinctly described in one word.

Cam Newton marked his Patriots debut with two rushing touchdowns and going 15-of-19 with 155 yards passing.

Tom Brady, playing his first NFL game with a team other than the Patriots, threw two interceptions as the Saints beat the Buccaneers, 34-23.

Elsewhere, the Red Sox beat the Rays 6-3 on Sunday. And the Celtics prepare for Game 1 of the Eastern Conference Finals on Tuesday against the Heat. The game will tip off at 6:30 p.m.

Dan Orlovsky on Cam Newton: While Newton’s debut for the Patriots on Sunday went about as well as it could have, especially given the Patriots emerged with a win, it still left some lingering questions.

Newton, 31, has dealt with a history of injuries over the last few seasons, which was one of the reasons why his former team (the Carolina Panthers) released the former No. 1 overall draft pick in the offseason.

Yet a crucial part of the Patriots’ game plan for Newton on Sunday was using the talented quarterback on designed runs. In all, he ran for 75 yards on 15 carries. But there are already critics of this approach, including ESPN analyst Dan Orlovsky.

“It’s not sustainable,” Orlovsky concluded in a segment for ESPN morning show “Get Up!” on Monday. “Listen, it was awesome. It was great. Josh McDaniels was super smart with the way they spread the field and utilized the run game, and I’ve talked all offseason about allowing the numbers to get the same. That was great.

As for Newton, Orlovsky voiced concerns over the durability of a player who has already taken numerous hits in a decade-long career.

“What’s the one thing that we have all said about Cam Newton’s career?” Orlovsky asked. “The number one thing that we have all said is those hits added up. Those hits added up, and they will add up over the course of a season as well. So while it’s a great start, there are already rumors — I’m hearing rumors that there’s a hamstring [injury] with Cam, after Week 1. I just don’t see it lasting long term.”

Orlovsky, a former quarterback for the University of Connecticut (and who played in the NFL from 2005-2017), acknowledged that Newton hasn’t played in a meaningful game for nearly a year.

“It’s important to point out that it’s still Week 1 and Cam hasn’t played football in a long time,” Orlovsky conceded. He also praised Newton’s ability to connect on passes.

“I don’t know if we’ve seen that version of Cam Newton where he’s patient with the football, deliberate with getting through his progressions, finding the open receiver, not forcing the football downfield,” said Orlovsky.

The Patriots will face a tougher test in Week 2, traveling to Seattle to play the Seahawks on Sunday night, with kickoff set for 8:20 p.m.

Trivia: On Sunday, Cam Newton rushed for 75 yards on 15 carries. Who was the last Patriots quarterback to have more rushing yards in a single game?

Hint: He was selected by the Patriots in the fifth round of the 1975 NFL draft.

“He’s a baller. He brings energy…#1 made some incredible plays and we’re going to need that from him all year.” – Julian Edelman on Cam Newton’s debut with the @Patriots. pic.twitter.com/O18qbAi7dM

Isaiah Thomas weighed in on the Clippers’ shooting struggles:

I know for damn sure I could’ve helped the Clippers!!! We just gon keep working tho

On this day: In 2003, Jamal Lewis set a new single game NFL record with 295 yards rushing against the Browns. The record would stand until 2007, when Adrian Peterson eclipsed it by a single yard. 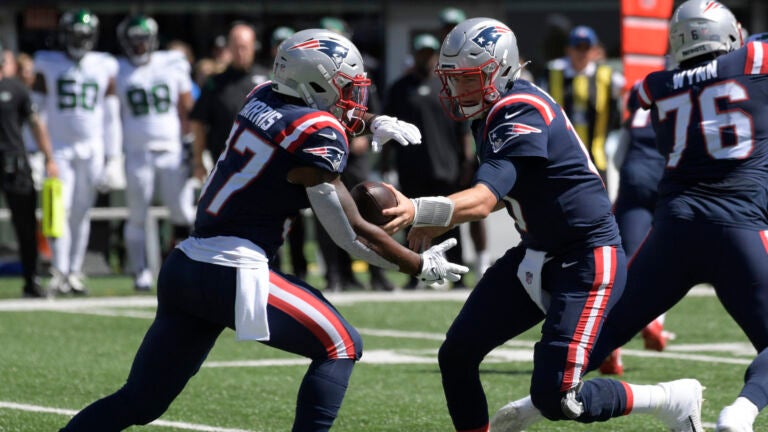