Will the Cam Newton era be a successful one for the New England Patriots? Some NFL experts seem to think so.

After the Patriots defeated the Dolphins on Sunday, 21-11, in their season-opener, headlines centered around quarterback Newton, whose 15 carries for 75 yards and two touchdowns on Sunday were the most by a Patriots QB since Steve Grogan in 1977. Newton said that his offensive performance is the “new normal” for the Patriots.

It’s his running game, as the Ringer’s Kaelen Jones noted, that could be an effective weapon for the Patriots’ offense.

“Newton’s debut performance has already proved that all discourse surrounding New England’s seismic transition from Tom Brady to Newton was warranted,” Jones wrote in his post-game analysis. “Newton led the Patriots offense with 15 carries for 75 yards and two touchdowns (all team highs), pummeling the Dolphins in a 21-11 win. New England’s identity Sunday revolved around the run game, as it rushed 42 times for 217 yards and three scores… That mentality counters everything we’ve known about the Patriots across the past 20 years.”

Others, however, believe that Newton’s running game is not sustainable as a 31-year old quarterback, or against tougher competition.

“Is Sunday’s model sustainable? Probably not,” wrote Boston.com’s Dave D’Onofrio. “Newton, who’s 31 years old, had only once in his career run the ball more than 15 times. The Pats will face tougher tests than the developing Dolphins, starting next week at Seattle. There’s surely work to do. But Sunday’s second half offered a glimpse of what the Patriots will likely look like if this thing ultimately works.”

As for the Patriots defense, Sports Illustrated’s Max Auliffe was just as impressed by their “knack for taking the ball away” on Sunday. Cornerback’s Stephon Gilmore and J.C Jackson both snagged an interception, while Adrian Phillips picked off the Dolphins’ Ryan Fitzpatrick at the end of the second quarter.

Here’s what other NFL experts think of the game:

Karen Guregian, Boston Herald: “The quarterback ruled the day, just like that other guy who used to call Gillette Stadium his home the past two decades. There were big-time drives, clutch plays and an unmistakable will to win on display from the player under center. Of course, that part was eerily familiar to Patriots fans…

“When Newton rules, it’s largely because of his legs and ability to run, as opposed to his prowess throwing the football. When Superman is at his best, he’s dusting off opponents by utilizing his mobility to complement his passing game.

“That new dimension was on full display during the Patriots’ 21-11 season opening win over the Dolphins. “It wasn’t perfect. There’s still room to improve. But as debuts go for a quarterback replacing a legend, it’s hard to come up with a much better scenario.”

Mike Reiss, ESPN: “[Newton’s] ability as a runner led Patriots offensive coordinator Josh McDaniels to introduce zone-read concepts never used with Tom Brady, who is more adept as a pocket passer. To highlight the contrast, consider that Brady had 34 rushing yards all of last season. Even when excluding kneel-downs, Brady would have totaled just 46 rushing yards in 2019, according to ESPN’s Stats & Information.”

Dave Hyde, Sun Sentinel: “All eyes were on him in New England in his first game replacing Tom Brady. He had a successful debut. Good game. Good presence. He ran 15 times for 75 yards (with touchdowns of 4 and 11 yards) to show he’s healthy again. He completed 15-of-19 passes for 155 yards with a receiving corps that consisted basically only Julian Edelman (same for Brady in his final years). Newton showed the new-world offense is in New England with the run-pass option. Still, it looked like offensive coordinator wasn’t opening up the offense in Newton’s first day.

“Part of that was they could run it up the gut against the Dolphins. It’s a tough duty to replace Brady. But if Newton can stack up a few games like this — and find a receiver or two in the process — New England can do what they’ve done for the past two decades in the AFC East.”

Max McAuliffe, Sports Illustrated: “It was the beginning of the third quarter where the Patriots really looked their strongest. When they got the ball to start the half, after not really relying too much on the passing attack, Newton and Edelman immediately connected on two big passes. New England sprinkled in some runs, play-action passes and read-options. None of it would really be answered by the Miami. On the eighth play of the drive, Newton rushed 11 yards to then knock over the pylon and score to conclude the eight-play, 75-yard, 4:46 minute drive. All eight plays gained 5+ yards…I mention that drive because that drive is the epitome of what McDaniels and this offense is going to try and do this season. McDaniels hit the Dolphins defense with pretty much everything in the toolbox. Everything looked smooth, efficient, crisp, and well executed. The drive was perfect.”

Jason La Canfora, NFL.com: “The Patriots are not about style points. They have become a muscular offense in the image of new quarterback Cam Newton, and on two scoring drives that basically sucked the life out of the Dolphins Sunday you could really feel it. Newton ain’t messing around, and coordinator Josh McDaniels can soften teams up with the power runs early to set up the pass, or vice versa. If you put too many helmets in the box, Newton will make you pay in the short passing game. The Pats went ahead early on an 11-play, 80-yard, six-minute drive. It went something like this: run, short pass, run, run, run, short pass, Cam keeper, short pass to Julian Edelman, run, Cam keeper for the TD…. Newton ran 15 times for 75 yards, far away the team leader as New England rolled up over 200 yards on the ground. This is who they are. Get used to it.”

Nick Goss, NBC Boston: “We spent the last few months talking about Newton’s ability to run the football as a big plus for the Patriots offense, and the initial results have been quite positive so far… It’s going to take a while for the Patriots offense to start firing on all cylinders. These were the first real game reps for the offense with Newton at quarterback due to the lack of a preseason. The early returns are pretty encouraging, though. Newton’s rushing ability and a healthy offensive line gives offensive coordinator Josh McDaniels so many options when calling plays and creating gameplans. The Patriots ranked No. 1 in interceptions, opposing completion percentage and opposing QB rating, while finishing No. 2 in pass yards allowed last season. New England’s pass defense looks poised for another strong campaign in 2020 based on Sunday’s performance.”

Zach Cox, NESN:  “The Patriots’ kicker competition has yet to produce a clear winner. Veteran Nick Folk, who was elevated from the practice squad Saturday, missed badly on his lone field-goal attempt against the Dolphins, pushing a 45-yard bid wide right…The Patriots can return Folk to the practice squad this week, and it remains to be seen whether he’ll get the call for next Sunday’s primetime road matchup with the Seattle Seahawks.”

Phil Perry, NBC Sports Boston: “To call it a throwback plan by Josh McDaniels would be a misnomer. Yes, the Patriots more than doubled-up their pass attempts (19) with carries (42) in a league that passed on about 60 percent of its offensive snaps last year. But this was modern-day option football that can be executed by only a handful of the most athletic quarterbacks in the league. It was a modern-day play-action scheme at time, using motion and wide-zone misdirection that’s employed heavily by some of the brightest young offensive minds in the NFL like Kyle Shanahan and Sean McVay…

“Together, with a combination of brute force and guile, they grounded out a win in their first go-round. It was different. And the league will have to adjust accordingly in order to prevent them from gaining some momentum with their new offensive approach.”

Tom E. Curran, NBC Sports: “What Newton did in his collaboration with offensive coordinator/soulmate Josh McDaniels was outstanding. But they got to take BP against the Miami defense because they kept getting the ball back. And when they had to punt it away, they knew they’d probably get it back before long.

“We still don’t know what kind of coaching mind-meld is running this defense – two parts Belichick with a side of Mayo? – but we salute their gray matter. Because even with all the turnover, the Corona constraints and the limits on hitting, the rebuilt Patriots defense didn’t skimp on the complexity.”

Nick O’Malley, MassLive: “This is to be expected. The Patriots only had a few weeks during training camp to go from zero to Week 1. They also had to do with the first starting QB change since the first Harry Potter movie came out. Newton and the receivers aren’t perfectly in sync yet. Which makes sense. Newton also has a ways to go in audibling out of plays that are DOA. There were some examples early on where the Patriots ran into loaded boxes and ran a play action pass that give a blitzing linebacker a free shot at the quarterback…

“Beyond Newton, there were a series of issues that prevented the Patriots from pulling away in this one. N’Keal Harry fumbling through the endzone took points off the board. Nick Folk missed a field goal. Stephon Gilmore gifted the Dolphins a conversion on fourth down.”

Andrew Beaton, Wall Street Journal: “After one week it’s not difficult to look around the rest of the NFL and see how the Patriots also made a bet on the future. Modern offenses—and the dazzling young quarterbacks who marshal more and more of them—don’t rely on a quarterback who takes three steps backward and looks at the pocket as if from a cocoon they should never leave. They force opposing defenses to account for one more player who could break away and score at any given moment: the quarterback himself…

“But if Newton could stay healthy, it didn’t take much imagination to see how he could thrive in an offense that maximizes his uncanny abilities. It simply required a look around the league these days. The talented young quarterbacks who play in the vanguard of the NFL’s schemes all take advantage of their legs—or the threat of them.” 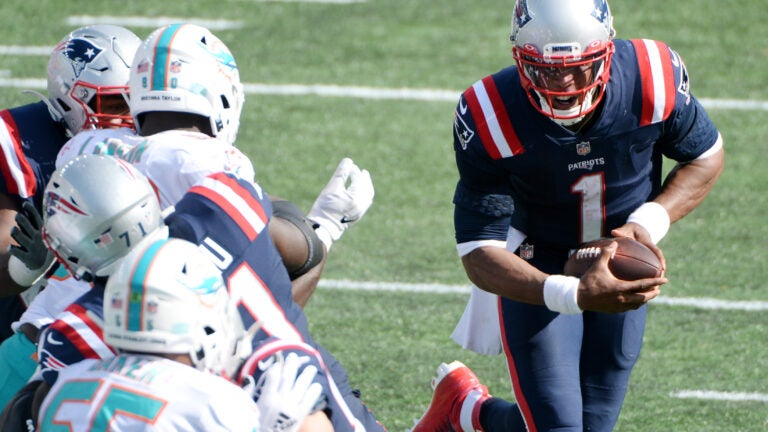