Paul Johnson hosted Bill Belichick at the U.S. Naval Academy’s football offices several times during his tenure as Navy’s head coach from 2002 to 2007. Belichick grew up in Annapolis, blocks away from the academy, where his father, Steve, worked for years as a scout and remained connected to the football program. During one visit, Belichick asked to watch film of Navy’s offense – a constellation of triple-options, counters and traps, most of them involving either a quarterback run or the threat of one.

“Steve, what’s he doing watching that?” Johnson asked Belichick’s now-deceased father. “Tom Brady’s not doing any of that stuff.”

“I think he’s really trying to figure out how he would defend it,” Steve Belichick replied, Johnson recalled. “Or he just likes watching it.”

On top of being the most successful coach in NFL history, Belichick is the sport’s preeminent connoisseur of football strategy and history. He donated the world’s largest collection of football books to the academy, which houses the Belichick Library in its football offices. As Belichick built the New England Patriots’ two-decade reign, he remained cordoned off from one portion of the sport, forced to reckon with it more and more as the game evolved in recent years, but never able to wield it himself.

A running quarterback opens a different world of options to an offense, but as Belichick employed Brady for essentially the entirety of his New England tenure, Belichick did not have one at his disposal. It was a situation any coach would love – the Patriots won six Super Bowls while their versatile offensive system and Brady’s skills from the pocket amplified each other – but one that has paved the way for the most compelling tactical subplot of the NFL season: How Belichick deploys Cam Newton, a quarterback opposite in style from Brady.

When the Patriots opportunistically signed Newton, a former MVP whom the Carolina Panthers released after he missed almost all of last season with a foot injury, it gave Belichick, a future Hall of Famer with nearly five decades in the league, a new kind of player. In his New England debut Sunday, a 21-11 victory over the Miami Dolphins, Newton ran 15 times for 75 yards. In 286 regular season games, Brady never once ran for half that many.

The Patriots’ fundamental ethos will not change. As they did with Brady, the Patriots will evaluate an opponents’ defensive weaknesses and utilize Newton’s strengths as they best they can to exploit them, developing singular game plans on a weekly basis. The Patriots are devoted to players, not playbooks. The fascinating part will be watching how that looks with a quarterback of Newton’s unique blend of talent.

“This is an evolution of the creativity within the staff, and it gives them a chance to redefine who they are offensively,” said Mike Lombardi, a longtime NFL executive and Belichick confidante who worked as a front office assistant for the Patriots from 2014 to 2016. “They’re starting over, too. The story is their ability to adapt to their talent.”

Over the years, Belichick has frequently expressed high regard for the challenge dual-threat quarterbacks pose. Newton, the Houston Texans’ Deshaun Watson and the Baltimore Ravens’ Lamar Jackson have all given Belichick fits in recent seasons. Therefore, it stood to reason that Belichick was intrigued by the idea of designing an offensive system around one himself. But coaches and executives who have worked with Belichick say that’s not quite true.

“What he’s intrigued with is having an advantage,” said one former Belichick assistant, speaking on the condition of anonymity. “He’s a defensive man. He knows the complications of a running quarterback, and what hurts him and his preparation. But why would you take Tom Brady off the field to put anybody else on the field?”

And so, New England’s post-Brady pivot to Newton probably does not necessarily reveal Belichick’s stylistic preference. But Newton was the best quarterback available – a former league MVP with uncommon physical gifts who had been passed over by other teams in part due to questions about his health – and so Belichick will mold his offense around him.

The Patriots’ use of Brady and Newton may not be as different in concept as they are in appearance. Patriots offensive coordinator Josh McDaniels said the offense may look completely different this week in their “Sunday Night Football” showdown against the Seattle Seahawks, because the Seahawks’ Cover 3 defensive scheme varies so much from Miami’s.

“It’s more of a function of what we feel like is best to do against the specific opponent that we were playing,” McDaniels said this week during a Zoom news conference. “I know we did some things that we really haven’t done much of around here for a long time – or maybe ever – but I think that’s just a function of using the players that you have to the best of your ability against the opponent and scheme that you’re playing.”

The Patriots will run some plays and use some concepts unavailable to them in previous years. On the Patriots’ second offensive play against Miami, Newton faked a handoff – which might have been one of his options on the play – and ran up the middle behind a pulling guard.

“Nobody is going to be scared of a guy who’s 5.5 [seconds in the 40-yard dash] running the ball,” Johnson said. “They’d love to see Tom Brady running the ball on the trap option and get a shot at him. Cam Newton, not so much. It’d be a little scary to see him coming around the end with it.”

Others will look completely different while being similar in concept to plays the Patriots used with Brady. On Newton’s second touchdown, he sprinted 11 yards to the pylon, away from three wide receivers and toward the right side of the field, where only one pass-catcher – tight end Ryan Izzo – was lined up wide.

Lombardi surmised the play was designed knowing the Dolphins would double-team Julian Edelman with one safety in the middle of the field, thereby leaving the opposite side of the field open. The Patriots, Lombardi said, may have exploited the defensive scheme with Brady by throwing to the one-on-one tight end. With Newton, it made better sense to have Izzo make an easy one-on-one block against the cornerback and let Newton roam through the open space.

Newton’s second touchdown was strikingly similar, if not identical, to the play Jacoby Brissett scored a touchdown on when the Patriots resorted to their third-string quarterback against the Texans during Brady’s Deflategate suspension in 2015 – one of the few examples that exist of Belichick’s Patriots being led by a quarterback with running ability.

The Patriots may hold an advantage early in the season because opposing coaches can only guess how they may utilize Newton. But they lose a different advantage in not having Brady. Lombardi noted that Newton’s running ability won’t necessarily provide the Patriots more options. Brady had been with Belichick and McDaniels for so long that their shared history gave them versatility.

During their Super Bowl victory over the Los Angeles Rams two years ago, the Patriots on their game-winning drive used a formation and plays they had employed years prior but not practiced that week. Those subtleties were not as obvious as the variable nature of Newton’s game, but it gave New England a universe of options.

“Because he was in the system for so long, there was a lot of different things they could do, that maybe to the average fan you didn’t see,” Lombardi said. “But they were able to gain an advantage because of the continuity they had. Whereas now, they’re kind of learning as they go along.”

That may be the most enticing part of Newton in New England. Nobody, not even the Patriots themselves, knows exactly what kind of offense the marriage of Belichick and Newton will produce. Chances are, we’ll just enjoy watching it. 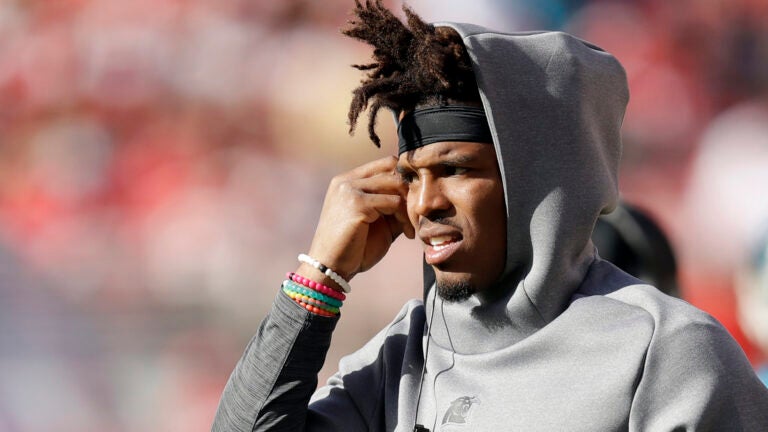 ‘It was just one mistake’: Cam Newton came to N’Keal Harry’s defense over his fumble against the Dolphins