The 27-year-old speedster has reunited with Cam Newton, his quarterback for multiple seasons in Carolina. After going undrafted in 2015, Byrd spent two seasons on the Panthers’ practice squad before earning a spot on the 53-man roster in 2017.

Byrd left the Panthers for the Arizona Cardinals last season, but he and Newton are now back together in New England — and their relationship has picked up where it left off.

“Me and Cam have great chemistry,” said Byrd, who signed a one-year contract with the Patriots in March. “Being together so long in Carolina, it kind of comes naturally. We still are learning each other within this offense, and that will allow us to continue to get better.”

Offensive coordinator Josh McDaniels can see the familiarity of their connection, too.

“They’ve worked together before,” McDaniels said. “They’ve worked hard this training camp and into the season to really connect and be on the same page with each other. I thought they made some big plays the other night together.”

Against the Seahawks in Sunday night’s dramatic defeat, Byrd caught six passes on nine targets for 72 yards. Five of his receptions gave the Patriots a first down, with four delivering gains of at least 14 yards.

Despite registering zero targets in the season opener against the Dolphins, Byrd has maintained a heavy snap count in New England’s first two games. He was on the field for 88 percent of the offensive snaps in Week 1 and 86 percent in Week 2.

“Being a receiver, you don’t know what the day’s going to be like,” Byrd said. “Sometimes you get zero targets, sometimes you get nine or 10 or somewhere in between. It’s just kind of how the game goes. You just lock in on the game plan and try to do your assignment every play.”

While in Carolina, Byrd’s role largely consisted of special teams duties, such as returning punts and kickoffs. Though his opportunities within the offense were minimal, Byrd said Newton treated him no differently.

“Cam hasn’t changed since the day I met him,” Byrd said. “He’s been the same guy, day in and day out.”

N’Keal Harry said he heard from Seahawks safety Quandre Diggs, after Diggs was ejected for a helmet-to-helmet hit on Harry in the first quarter of Sunday night’s game.

“He made it clear he was not trying to hurt me and it was not intentional,” Harry said. “When it happened, I didn’t think it was intentional, either. I know that when you’re out on the field, stuff happens super, super quickly. I never felt like it was intentional.”

Seahawks safety Quandre Diggs was disqualified from #NEvsSEA for forcibly contacting the defenseless receiver in the neck and head area – this is a foul for both use of helmet and unnecessary roughness. pic.twitter.com/cqLfliEwwe

On fourth and 3 in the final minute of the first quarter, Newton hit Harry on a 13-yard pass up the middle. After Harry caught the ball, Diggs led with his helmet and levied a head-to-head blow. Harry managed to hang on to the ball, and he remained on the ground briefly.

After a short visit to the blue medical tent, Harry returned to the game.

“Him reaching out definitely meant a lot,” Harry said. 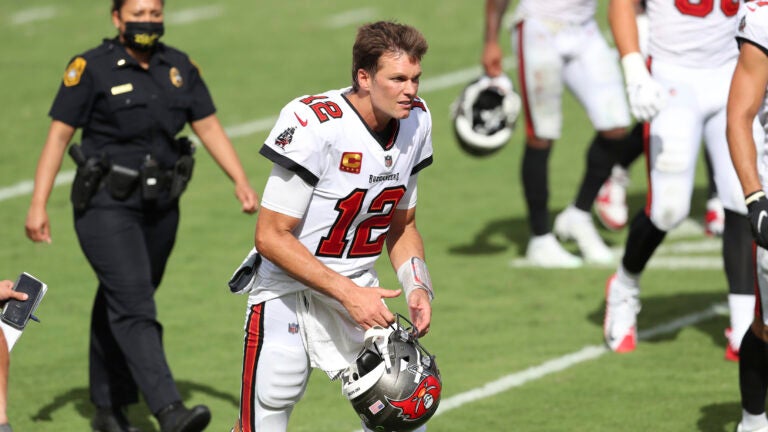 Sports Q: Which team will win more games this year, the Patriots or the Bucs?