As someone who never wanted to see Tom Brady play for any other franchise, please allow me to cling to my reluctance to declare Cam Newton his 2020 superior three games into the regular season.

The sample size is smaller than J.J. Taylor. The getting-to-know-you phase — for both for Newton in New England and Brady with Tampa Bay — remains underway.

So allow me that reluctance, and in turn I will grant you this: I’m still not interested in watching Brady play for any other franchise, though I do out of professional obligation. Turns out Cam Newton, Patriot, is much more interesting than anything Brady is doing for the Bucs now, or anything he did for the Patriots last year.

I’m acknowledging this in the hours after Newton actually submitted his least impressive performance of the young season. He finished 17 of 28 passing for 162 yards, with a touchdown and an interception Sunday, resulting in a middling 73.8 rating.

He entered the game as the Patriots’ leading rusher on the season, including four touchdowns on the ground in two games. But it was those he handed the ball to that did the brunt of the legwork Sunday, with Sony Michel rushing for 117 of the Patriots’ 250 yard on the ground. Newton ran nine times for 27 yards, season lows in attempts and yardage.

Sunday’s game provided our first glimpse of what it looks like when Newton is off. After CBS’s studio analysts raved about him during the pregame show — “The former MVP could soon be the two-time MVP,” said Nate Burleson, one not typically prone to hyperbole — Newton came out and played just a yard or two better than abysmally during the first quarter.

The Patriots managed just 38 total yards in the first quarter, when Newton was 3 for 6 for 20 yards and an interception. The interception, by Jonathan Abrams on a forced throw, came one play after he tried forcing the ball to Julian Edelman, leading the Patriots color analyst to blurt, “No!” when he released the ball.

Newton’s timing was off, his footwork, his mechanics, everything. When the second quarter didn’t start much better (he was 5 for 13 for 35 passing yards at one point), the easy inclination was the wonder how he and the Patriots would respond.

Turns out it couldn’t have been much more encouraging. The running game, without relying as much as they have been on Newton’s contributions, began running over and through assorted Raiders defenders, and they did it despite the absence of starting center David Andrews.

While Newton’s arm calibration wasn’t exactly precise for much of the day, he reminded us again that any concerns about his shoulder injury from two years ago should be summarily dismissed. His fastball still lights up the proverbial radar gun, his best throw coming on a cannon-shot 27-yarder in to N’Keal Henry with just under 10 minutes remaining to play. Two minutes later, he reminded the Raiders that having him hemmed in doesn’t mean a thing until he’s on the turf, using some nifty footwork to break free for a 21-yard run, punctuating the play with a howl and an emphatic first-down signal.

It should come as no surprise that Newton, a 10-year vet and the 2015 MVP, responded well to adversity. But a week after an encouraging but tough loss to Seattle, in a game Sunday that the Patriots really needed to win with the Chiefs looming next week, it was satisfying to see him do it for the first time as a Patriot.

And man, is he fun. The efforts to connect with his younger teammates, to build bonds with his younger pass catchers even when they do frustrating things, has been a joy to watch, from the individual pregame handshakes and the group get-fired-up session with the receivers, to him hilariously melting away from Harry during a late conversation on the bench. CBS really ought to add a Cam cam that focuses entirely on him.

Brady is the greatest quarterback ever to play, and his Bucs pulled off a suspense-free 28-10 win over the beat-up Broncos on Sunday afternoon to, like the Patriots, improve to 2-1. Brady was efficiently excellent, putting up a stat line (25 of 38, 297 yards, three touchdowns, no interceptions) that could have been lifted from 2010 or another year of his prime.

The franchise of Vinny Testaverde, Steve DeBerg, and Steve Spurrier must be thrilled with what he has brought them. He looks like the same quarterback he was a season ago — productive, perhaps a little less precise than he used to be, demanding, and joyless when things start to go wrong, and sometimes even when they have not.

I never wanted to see Brady play elsewhere. He’s permanently ours in legend and achievement, but theirs for now. It will be forever weird to see him in those homely Bucs jerseys, his mannerisms the same but the surroundings so different.

But I’m glad he’s elsewhere. The chance to watch Cam Newton do his thing in his own brilliant way, even on an occasionally frustrating day, is a pleasure I didn’t know we needed, but am sure glad we have. 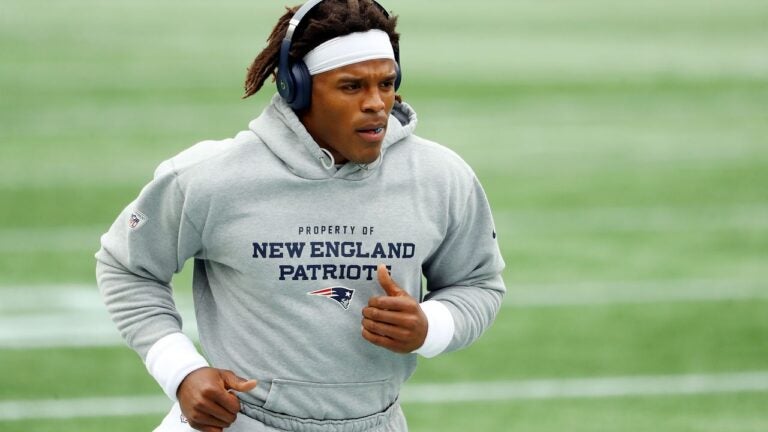 ‘We have so many different ways to beat you’: Cam Newton is confident in the Patriots’ offense