Bill Belichick is no stranger to criticism, especially when it comes to his draft history with the Patriots. Players like Cyrus Jones, Duke Dawson, and Tony Garcia were all high draft selections within the last five years. Other early draft picks, like Isaiah Wynn, N’Keal Harry, Derek Rivers, and Yodny Cajuste took a while to get onto the field due to injury.

The reality of the situation is that Belichick, like every other NFL executive running their respective team’s draft, has his fair share of whiffs on draft picks. But for every Ras-I Dowling, there is a Mike Onwenu, and for every Jordan Richards, there is a Trey Flowers. While his record drafting in the early rounds is not pristine, there are few that are better at mining for talent in every round of the draft than Belichick.
Advertisement:

For all the griping about Belichick’s draft record, it was the youth on the Patriots roster that was showing up in key moments on Monday night, as New England battled the defending Super Bowl champions on the road in Kansas City.

There was Chase Winovich (3rd round), who is first in the NFL in pass rush win rate, getting to Patrick Mahomes for the sack (or what should have been an interception).

Mike Onwenu (6th round), starting for the second straight game, crushing defenders and opening up gaping holes for running backs.

Jarrett Stidham (4th round) connecting with N’Keal Harry (1st round) on a beautiful throw and catch for a touchdown to keep the game close in the second half.

Kyle Dugger (2nd round) and Joejuan Williams (2nd round) were part of the team effort that limited Chiefs All-Pro tight end Travis Kelce to just three catches on Monday night, a significant reason why the explosive Chiefs offense looked out of sorts for much of the game.

Damien Harris (3rd round) rushing for 100 yards on 17 carries in his first career NFL start.

The point is, development in the NFL is rarely linear, which is why it’s taken the young talent on the Patriots roster time to get near the top of the depth chart at their respective positions. Even still, with so many first- and second-year players showing up on Monday night, New England still has more young talent waiting in the wings, as players like Josh Uche, Devin Asiasi and Anfernee Jennings wait to get the chance to make their mark on the field, too.

So while it hasn’t been the smoothest– or quickest– transition from college to the pros for some of New England’s top draft picks, the team is starting to reap some of the benefits of the patience it has exhibited with players like Isaiah Wynn and Harry, who have been key contributors for the team through the first four weeks of the 2020 season.

For a team that will be flush with cap space this offseason, the youth movement that is beginning to take root in Foxborough will help guide this franchise into the next era of Patriots football.

With the team having impact players already at key positions like left tackle (Wynn), guard (Onwenu), edge defender (Winovich), and box safety (Dugger/Williams), the team won’t need to spend exorbitant amounts of money to bolster its roster for next season.

While the result on Monday night might not have gone in the Patriots’ favor, seeing the team’s youth step up in key moments is a good sign for the future, and a reminder to those critical of Bill Belichick’s draft record that sometimes, you just have to trust the process. 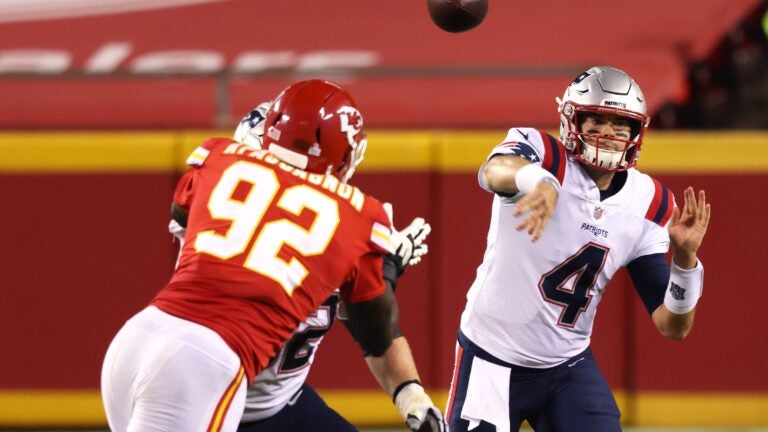 5 takeaways from the Patriots’ 26-10 loss to the Chiefs