Cam Newton made an unspectacular return to action on Sunday after missing a game due to COVID-19.

The Patriots quarterback threw for just 157 passing yards and had two interceptions in the 18-12 loss to the Broncos.

Whatever Newton’s issues on Sunday were, the last thing he wanted to blame them on was dealing with the virus.

“Honestly for me right now I’m just trying to move forward, obviously respectfully that was two weeks ago, still bitter over the game and just trying to focus on ways to just get better,” Newton told reporters in his first press conference since he tested positive for COVID-19 on Oct. 2. “Obviously everybody knows what the situation was, and it is what it is and I just know for me here moving forward I just got to play better football and that’s what I’m going to try to do.”

In the 13 days since the Patriots played their last game (which was against the Chiefs on Oct. 5), they’ve only had two practices due to four other players testing positive for COVID-19.

The rust from time off the field was apparent in Sunday’s game. The Patriots scored just three points in the first three quarters, which was their lowest point total through three quarters in a game since a 2016 shutout loss against the Bills.

Newton had just 126 passing yards and 19 rushing yards in the first 45 minutes of play. He acknowledged the time off, but like with COVID-19, he didn’t want to use it as an excuse.

“Oh, without a doubt,” Newton said when asked if he felt the rust on Sunday. “But yeah, we’re still professionals and we’re expected to do our job and play at a high level and we didn’t do that today.”

The Patriots had three turnovers on Sunday following their four-turnover performance against the Chiefs. Newton was responsible for two of those with the aforementioned interceptions. He was also strip-sacked, but the Patriots recovered the ball.

Newton expressed how upset he was at himself for the turnovers.

“I think for us the first thing — the number one thing — is protecting the football,” Newton said. “That’s what it comes down to, from the turnovers… those are drive killers and those are game killers. And it starts with me, I’m extremely frustrated in myself am my performance moving forward.”

“I didn’t get the job done today. So you can just imagine how I feel, but, yeah, I don’t want this to be a pity party. We do have another opportunity here coming up, we have to follow this up with great practice this week and I look forward to it.”

Newton and the Patriots were able to foster a comeback attempt in the fourth quarter. A 38-yard run and a six-yard run by Newton set him up for a one-yard QB sneak into the endzone to cut the Broncos’ lead to 18-9 with 8:31 remaining.

The Patriots failed to convert the two-point conversion but got the ball at the Broncos’ 25-yard line after JC Jackson picked off Drew Lock on the Broncos’ following drive. Newton wasn’t fully able to capitalize on the opportunity as they had to settle for a field goal to make it 18-12 with 3:23 remaining.

Lock threw another interception on the Broncos’ first play on the following drive, giving the Patriots the ball at their 28-yard line.

Needing a touchdown, Newton drove the Patriots down to the Broncos’ 24-yard line. On 4th and 10, he appeared to have an open N’Keal Harry but the Broncos’ blitz rushed his throw, forcing Newton to miss Harry and turn the ball over on downs.

Newton said his confidence in his receivers is “extremely high” and took the blame for the missed throw.

“Well we didn’t execute the way we’re supposed to and that’s a lot,” Newton said about the final throw. “That was contingent upon me. I knew I was going to get hit. So I just tried to find a spot to give him, so he could make a play on it. There was a defender on the interior part stealing the field, so I still tried to give him an opportunity. So that’s what it came down to.”

The Patriots fell to 2-3 with the loss, giving them a losing record in October for the first time since 2002. Newton isn’t hitting the panic button but also knows that the Patriots don’t have much time to waste.

“There’s no need to panic,” Newton said. “But we for sure have an opportunity here that we just can’t, we just cannot allow ourselves to just go through the motions and expect us being who we are is going to take care of itself because that’s not the case.” 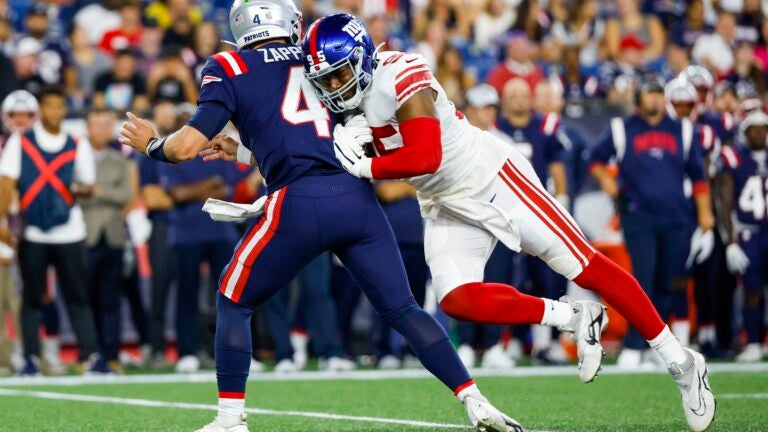