After throwing for only 157 yards and two interceptions in the Patriots’ 18-12 loss to the Broncos on Sunday, Cam Newton placed the blame for the team’s offensive struggles firmly on his own shoulders.

“I have to be better,” Newton said during his Monday interview with “The Greg Hill Show” on WEEI. “I want to make that perfectly clear. I have to play better football for the New England Patriots, and I will.”

“I take full responsibility of where we are as an offense, and knowing here moving forward, it starts with No. 1, and I will be better,” Newton predicted. “That doesn’t mean I’m going to do more and press the issue. It’s just doing the small [things] better, and I do think I can do a better job at that.”

Prior to the game, the Patriots were largely unable to practice despite the originally scheduled matchup being postponed for a week due to positive COVID-19 tests. Newton, 31, was one of the Patriots’ positive tests. He didn’t shy away from discussing the subject.

New England managed only two on-field practices in two weeks prior to facing the Broncos, and the Patriots’ quarterback admitted it was obviously an issue.

“I think it showed,” Newton said of the lack of practice time. “I think it was evident, but yet through it all we’re professionals. We had a lot of mental work in Zoom calls this past week and that’s what it really comes down. Nobody really cares. I know there are a lot of people listening to this in the fanbase. They just want results, and it’s our job to give it to them.

“Talking about the whole big picture, I think we will be fine,” Newton added, “but yet we just have to do better when given an opportunity.”

The Patriots were unable to pass the ball effectively against Denver. Timing and cohesion as an offense appeared to be a factor in New England’s shortcomings.

Newton explained how the lack of practices had a detrimental effect on the passing game, given the precision required.

“Timing was off and the anticipation was off. I think that was the biggest discrepancy in not having practice,” Newton said. “Usually you could just throw it way before the receiver is looking for it and be on the money with it. But not having practice for as long as I haven’t had practice just showed yesterday.”

Asked if testing positive for COVID-19 has been the “strangest two weeks” of his career, Newton was unequivocal in his response.

“Oh without a doubt, without a doubt,” he explained. “Here I am, I’m getting prepared for something, and then you find out the day before that I’m not going to go. I was thinking as optimistic as could be, thinking it was a false positive. Then it ended up being true. You go through it and games get rescheduled and you just sit and wonder, you can’t work out, you can’t do anything. And obviously me being who I am, it’s not like you can just take this time to go vacation somewhere.

“It has been weird, it has been an adjustment to the routine, but people don’t pay attention to all that stuff,” Newton noted. “They just want production, and so do I.”

A question around the Patriots’ offense has been whether or not the team has enough talent at the wide receiver position. Damiere Byrd was the only New England wide receiver to record more than one catch on Sunday, with former first-round pick N’Keal Harry making zero receptions.

Newton reaffirmed his confidence in the group, citing the collective faults of the offense as a whole.

“Offensive football is the ultimate team sport,” Newton said. “Even one person not doing their job, it shows. I think it showed yesterday.”

At 2-3, the Patriots are under .500 after five games for the first time since 2002. Reminded that many in the New England area will think “the sky is falling” due to the team’s current record, Newton closed his interview with an upbeat assessment.

“The sky may be falling for the next couple of days, but listen, I’ll bring my umbrella, my raincoat, and everything else that I need to get the job done.” 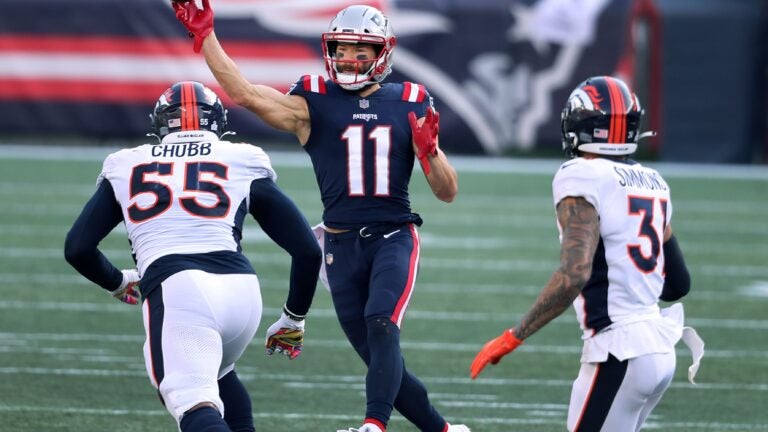 5 takeaways from the Patriots’ question-prompting loss to the Broncos