I’m not quite ready to accept mediocrity as the defining characteristic of the 2020 New England Patriots.

Despite the overall dominance of the past two decades, there have been plenty of moments like these; periods of doubt cast in the wake of a bad loss, stretches where it seemed like the magic had dissipated, only to reappear with a healthy serving of yolk spread across the faces of those who thought otherwise.

Tom Brady dealt with depleted offensive lines the same way Cam Newton did during last Sunday’s putrid loss to the Broncos (albeit, Brady did it better than Newton, who struggled mightily against Denver). But the Patriots always found a way to rebound. Why should this time be any different? Just because Brady is busy getting his rear kissed in another locale this season? Brady dealt with a lack of wide receivers just like Newton has during his first year in New England. The latter just seems more intent on sampling the talent surrounding him instead of ignoring it. That is, if he can get the balk to them without it being tipped at the line of scrimmage.

There are plenty of reasons to panic over last Sunday’s loss, and just as many excuses to make in the process. Newton hadn’t played for a fortnight, the team was thrust into action with a lack of practice time under their belts, and Bill Belichick, apparently, misplaced his challenge flag during the second half. It’s easy to forget that most Belichick-coached teams don’t necessarily go downhill during the second half of the season, i.e. the 2009 Patriots, fueled by the Jetsons.

Still, this is the first time a Patriots team has had a losing record this late into the season since the 2002 campaign, a season during which New England missed the playoffs following action on the final day of the regular season. If the postseason began today, the Patriots would be sitting on the outside, watching the likes of the Browns, Colts, and Bills taking their annual spot. Last weekend was a prime opportunity to gain some ground on suddenly-struggling Buffalo, with the Patriots’ first showdown against their AFC East rivals slated for the day after Halloween.

If the Patriots fall to the 49ers this weekend and head into that game with a 2-4 record, we might reconsider the mediocrity label. For now, though, we’ll just consider this Broncos loss on par with some of the stinkers we’ve witnessed during the years of the dynasty, when a trip to Miami might create percolating doubt. Or when it seemed like the team would never win in Denver without the ploy of a self-induced safety, no matter what.

This team could be mediocre. No question. Let’s just table the thought and address it after another game as bad as the one we watched last Sunday.

Joe Giglio, NJ.com: Patriots (-3). “Get ready for the Jimmy Garoppolo Bowl! The ex-Patriots quarterback bounced back last week, but will face a stiff test on the road vs. a coaching staff that knows him well. In a close game, Cam Newton leads a game-winning drive late.”

MMQB staff: Four out of six pick the Patriots.

ESPN staff: Seven out of 10 go with New England.

Pete Prisco, CBS Sports: Patriots 27, 49ers 21. “This is a long trip for the 49ers, but they have to be rejuvenated after beating the Rams last week. The defense played much better in that game. This is also the return of quarterback Jimmy Garoppolo to New England. The Patriots were upset last week by the Broncos at home. I can’t see them losing two straight on their home field. They bounce back in this one as Cam Newton plays well.”

CBS Sports staff: Six out of eight take the Patriots (-2.5). Six of eight also like the Pats straight-up.

Jimmy Kempski, Philly Voice: 49ers. “So I see we’re pretending that the Patri*ts are still good?”

Vinnie Iyer, Sporting News: 49ers 24, Patriots 20 (Upset of the Week). “The 49ers got healthier and grinded out a win against the Rams. Their offense is back to using unique skill players in creative play-calling, now that everyone is healthy. The Patriots’ defense and will focus to take away one thing, but it’s hard to do that because of the interchangeable, physical, quick big-play nature of George Kittle, Deebo Samuel and Brandon Aiyuk. Eight years ago, the 49ers went into New England and won with Jim Harbaugh and Colin Kaepernick. Here’s a similar result with Kyle Shanahan and former Patriots backup Jimmy Garoppolo. It’s very hard to trust Cam Newton and the Patriots’ offense against a still solid 49ers defense.”

Bill Bender, Sporting News: 49ers 24, Patriots 21. “The Patriots are in trouble, and they are catching the 49ers at the wrong time. Jimmy Garoppolo gets enough help in the ground game, and New England questions swirl after a third-straight loss.”

Mike Florio, Pro Football Talk: Patriots 24, 49ers 17. “A full week of practice will make a difference for the Patriots, who should be able to generate enough points to slow down San Francisco’s creative attack. Also, no one knows the flaws and limitations of Jimmy Garoppolo like the coach who drafted him.”

Michael Hurley, CBS Boston: San Francisco (+1.5). “It’s entirely possible that Cam Newton remembers that he has to set his feet to deliver a pass, but the uninspired play vs. Denver combined with the Niners finally looking good makes it hard to pick anything but Jimmy G’s winning smile for this one.”

Gregg Rosenthal, NFL.com: Patriots 22, 49ers 20. “If I don’t trust a team’s passing game, I don’t trust that team at all in the year 2020. I don’t trust either of these teams’ passing games. Cam Newton was hesitant to throw to open receivers last week, while 49ers coach Kyle Shanahan is hesitant to call plays that require Jimmy Garoppolo to throw beyond the line of scrimmage. In a battle of running games and defense, the slight edge goes to the team with the running quarterback, the superior secondary and Bill Belichick. But Kyle’s dad often brought out the worst in Belichick, and a 2-4 start would be the worst in Foxborough since 2000, Belichick’s first season there.”

It says here: Patriots 28, 49ers 3. Eh, not really. But the low-hanging fruit that comes with the first Shanahan-Belichick matchup since that fateful day was too easy to ignore. 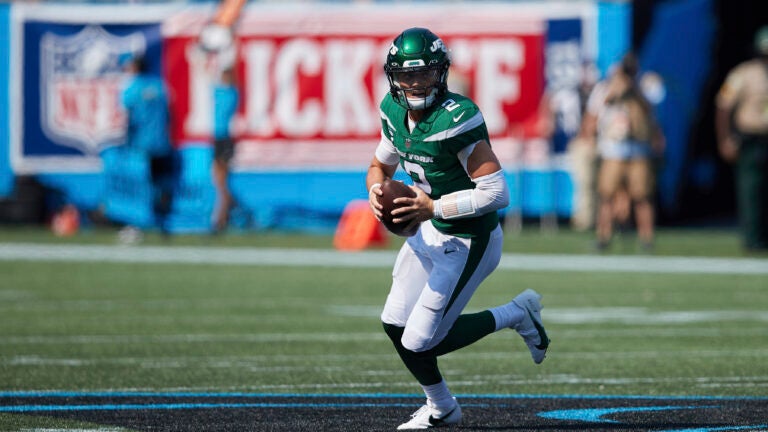