Thirteen thoughts on the Patriots’ 33-6 loss to the Niners …

1. It was the kind of loss Sunday afternoon that had become so rare around here in the last 20 years, the kind where you find yourself wondering which veterans might bring something to build on in the trade market, when look at the opposing team and its quarterback with admiration and maybe a little bit of envy, and, at least in my case, when you find yourself Googling “worst quarterback performances in Patriots” history before the third quarter is complete. With their efficiency and toughness, the Niners on Sunday looked like so many great Patriots teams of recent vintage, and they did it with a roster that has been bludgeoned with injuries. The Patriots looked like they did back in the days when we tried to convince ourselves that Tommy Hodson might be a suitable replacement for Hugh Millen. The Patriots have lost three straight games for the first time since 2002, and have lost eight of their last 12 games. Oh, yeah, this was a brutal Sunday, it’s fair to wonder if it’s the new normal.

2. So about that Google search. Newton was brutal, completing 9 of 15 passes for 98 yards, three interceptions and a 39.7 rating. He hasn’t thrown a touchdown pass since finding Rex Burkhead in the second quarter of the win over the Raiders on Sept. 27. Any benefit of the doubt he deserved after missing the Chiefs game and numerous practices with COVID-19 expired this Sunday, his second straight dismal performance. How dismal was it? The closest statistical comparison I can find to it in Patriots history was probably Steve Grogan’s 9-for-20, 74-yard, three-pick performance in a 30-0 loss to the Browns on Nov. 20, 1983. And that was a different age in terms of the passing game in the NFL.

3. There have been some horrendous single-game performances by Patriots quarterbacks, including the most accomplished ones. In the infamous 30-0 loss to the Bills to open the 2003 season, Tom Brady went for 14 for 28 for 123 yards, four interceptions, and a 22.5 rating. He did OK in his career after that, though I must admit to losing track of where he is now. Anyone know? Grogan, Drew Bledsoe, and Jim Plunkett – all highly accomplished and/or beloved NFL quarterbacks had several days as miserable as Newton’s Sunday. Pro-football-reference.com jostled my memory of the worst one I’ve ever seen: Matt Cavanaugh’s 6-for-17, 64-yard, three-interception disaster against the Jets on  Sept. 19, 1982.

4. Bill Belichick pulled Newton with 4 minutes and 40 seconds remaining in the third quarter, after his third interception. That was the right time to do it. I didn’t mind Belichick leaving him in to that point, in the hopes there would be something positive to build on. But there just wasn’t. He was wildly inaccurate all day, chucking bounce-passes in the flat, missing Damiere Byrd open downfield at least once, and leaving you wondering when he’s holding the ball whether he’s not seeing open receivers, which was a major problem last week against Denver. Jarrett Stidham was no better, throwing a pick and finishing with a 39.2 rating.

5. This “National Tight Ends Day” silliness that Jimmy Garoppolo and George Kittle apparently cooked up and CBS amplified would be a lot more interesting if the Patriots had a functional one. At this point, Belichick has to be ready to see if Russ Francis is interested in a comeback. At least rookie Dalton Keene collected his first career catch, at 6 minutes and 21 seconds of the third quarter with the Patriots down by 27 points. It’s a place to start.

6. Any argument that Belichick should have kept Garoppolo over Tom Brady in 2017 was defeated for good when the Patriots beat the Rams in Super Bowl LIII. A Super Bowl victory eclipses every other option. I think sometimes we forgot around here how hard it is to win just one. Although we seem to be remembering now.

7. Even though Garoppolo has been inconsistent during his time with the Niners – and was abysmal in the fourth quarter of Super Bowl LIV in February – it’s understandable why so many Patriots fans still pine for him. He seems like a nice guy, multiple sources indicate he is considered quite handsome, and he didn’t just play well filling in for the suspended Brady in 2016, he played tough.  He was efficient and let the skill players around him do most of the heavy lifting Sunday, finishing 20 of 25 for 277 yards, with no touchdowns and a pair of interceptions (one on a for-the-heck-of-it deep shot just before halftime).

9. Can’t say I thought Patriots fans would come out of this game envying the Niners’ offense, which entered ranked 20th in points (24.7) and 16th in total offense (368.5 yards per game). But the creativity in getting the ball to receivers Deebo Samuel and Brandon Aiyuk and running back Jeff Wilson Jr. was beyond impressive. Everyone, even the receivers, run with anger, and the receivers run like running backs in traffic.

10. I don’t want to dump on N’Keal Harry on a day in which he was knocked out with a blow to the head. So I won’t say the Patriots absolutely should have drafted Deebo Samuel (let alone Seattle monster D.K. Metcalf) rather than Harry in the 2019 draft. But I do wish the Patriots found clever ways to get Harry the ball the way the Niners do with their receivers. There’s still hope for him, in just his second season, but he needs to be involved.

11. Aiyuk, who had six catches for 115 yards, was a teammate of Harry’s at Arizona State in 2018. Harry had 82 catches for 1,142 yards and 8 touchdowns. Aiyuk caught 33 passes for 474 yards and 3 TDs. But last season, with Harry in his freshman year in the the NFL, Aiyuk picked up the production slack with 65 catches for 1,192 yards and 8 TDs. He was the Niners’ first-round pick this year, and with his production Sunday, he passed Harry, who had that one-season head start, in career receiving yards (280 to 277).

12. Have to sympathize with Julian Edelman, who is 34, has made his living getting pulverized, and now, clearly affected by a knee injury, looks like a spent shell casing of what he once was. Edelman was targeted just three times Sunday – his fewest since Week 8 of the 2013 season, when he had two targets (and two catches for seven yards) in a win over the Dolphins. Edelman would be among the last guys to check out on this team, but he wouldn’t be blamed for looking longingly toward the Tampa/St. Petersburg area right now.

13. Can’t help but wonder how many more times CBS’s No. 1 team of Jim Nantz, Tony Romo, and Tracy Wolfson will call the Patriots this year. Ian Eagle/Charles Davis/Evan Washburn will call the matchup with the Bills next week. Nantz told me Thursday he’s not sure how many more Pats game they’ve this year — several other games elsewhere are already “written in pen” on the sked. And that was before this debacle. 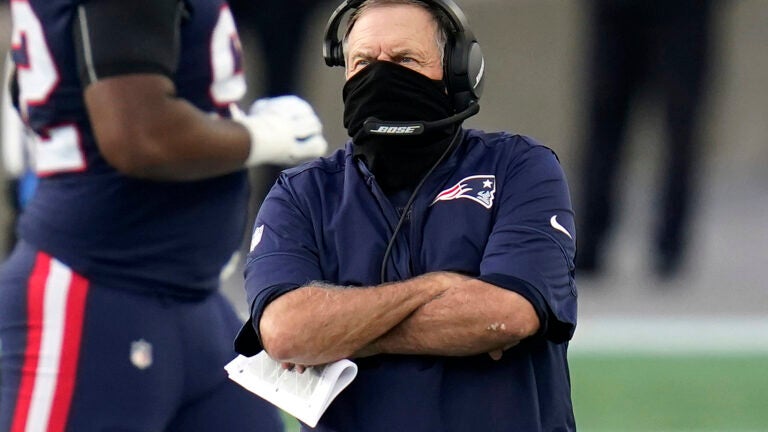