Let’s face it: If Sunday’s loss to the 49ers taught us one thing, it’s that maybe there are days it’s better not to have any fans in the stands.

Because if Gillette Stadium was full Sunday, it would have been even more ugly than it already was. A punchless offense and sluggish defense had no answer for old pal Jimmy Garoppolo, as San Francisco rolled to a shockingly easy 33-6 win over the Patriots.

Blowouts of New England — and I’m talking about “Let’s get everybody into the game” sort of blowouts — in the Bill Belichick era have been few and far between. Honestly, it’s hard to find many duds from the last 20 years as bad as what we all saw Sunday afternoon for a few reasons. Even in the gruesome losses, the Patriots have been able to find something salvageable. And long term, maybe some sort of good news will come from the ghastly loss.

In the short term, it’s hard to look at the numbers and not shudder: Cam Newton was 9-for-15 for 98 yards with one sack and three interceptions before being yanked late in the game for Jarrett Stidham. At halftime, San Francisco had more first downs than the New England offense had plays from scrimmage. The Niners didn’t punt until garbage time. And the Patriots have now lost three in a row for the first time since 2002. It’s not Halloween yet, but the fact of the matter is: If, as Bill Parcells suggested, you are what your record says you are, at 2-4, New England is one of the AFC’s bottom feeders.

Are the 2020 Patriots capable of responding? Only time will tell. But in the spirit of giving that defeat some sort of historical context, here are five other epic clunkers New England suffered under Belichick I’ve witnessed over the years — measured using opponent, expectations, point differential, and overall embarrassment level — and how each of those teams responded:

The first road start of Tom Brady’s career opened optimistically enough against Miami, with Antowain Smith rushing for a 9-yard touchdown run to make it 7-0. That was it for the positives. Brady’s stat line was 12-for-24 for 86 yards and four sacks. He wasn’t as careless with the football as Newton was Sunday, but in terms of overall tone and tenor at the quarterback position, Newton’s performance Sunday was fairly close to Brady’s effort that afternoon in South Beach. Belichick’s response? The following week at practice, he symbolically buried a football. The Patriots responded with a dramatic 29-26 home win over the Chargers the next week, and kept the momentum rolling the rest of the way. 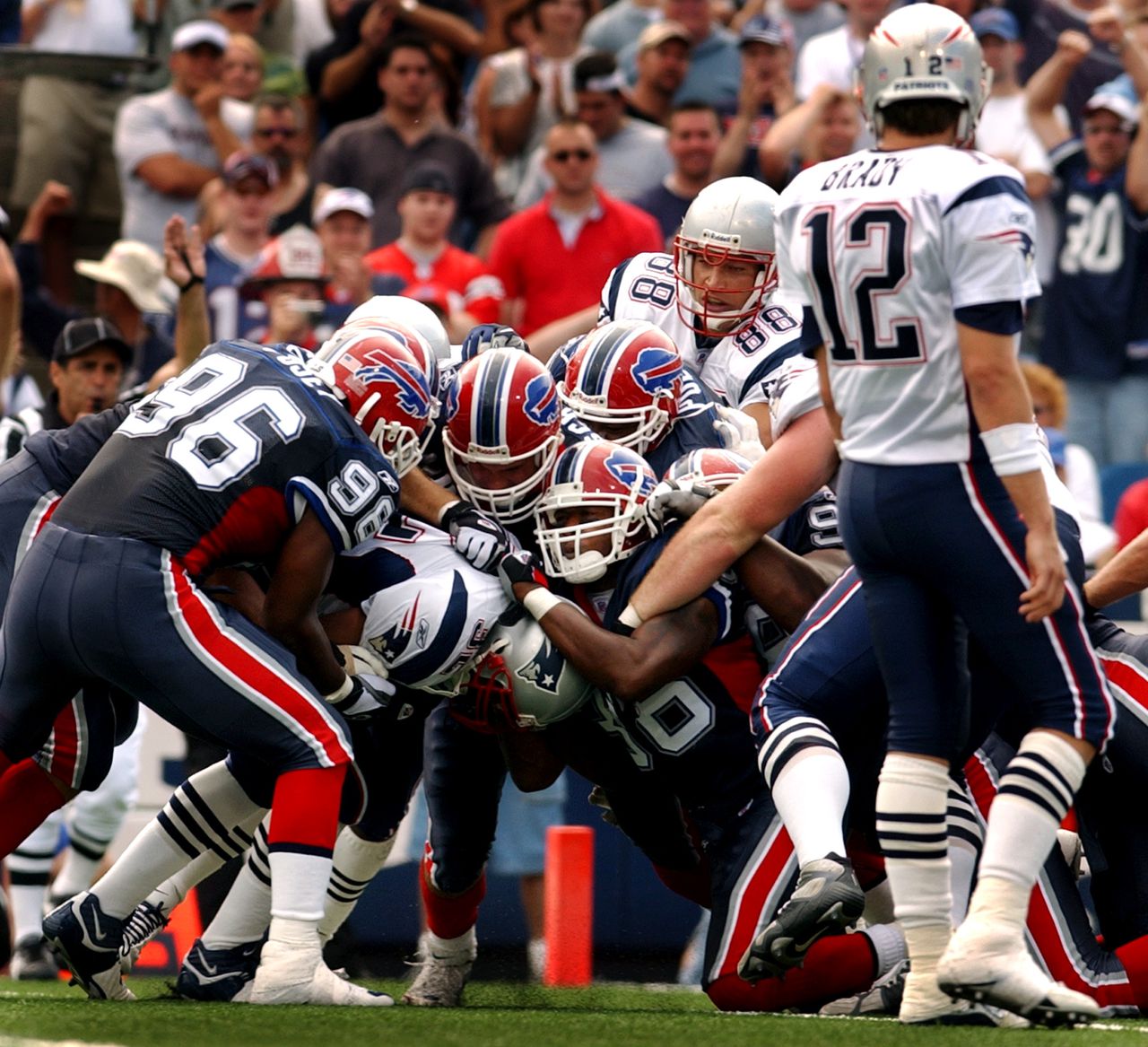 Tom Brady is powerless to help Antowain Smith as he’s tackled by Lawyer Milloy and the Bills during the Patriots’ 31-0 loss in the 2003 season.

In his first game against his old team, Drew Bledsoe and the Bills took a jackhammer to the Patriots and won 31-0. From a point-differential perspective, this game was the absolute nadir of the Belichick era. Like Sunday’s loss to the Niners, this one started badly and got worse: New England had nothing on either side of the ball in this one, as Buffalo took a 21-0 halftime lead and never looked back. Brady’s stat line in this one (14-for-28, 123 yards, four interceptions, two sacks) looked an awful lot like what happened to Newton against the Niners. (Coincidentally, this was the only other game that saw a former Patriots’ quarterback who played under Belichick come back and beat his old coach.) New England, which started 2-2, ultimately got its revenge with a neat bit of symmetry, beating the Bills by the same score at the end of the season on the way to its second Super Bowl win in three years.

Really for me, Sunday’s loss to the Niners most closely resembled the 41-17 thrashing at the hands of Drew Brees and the Chargers. The biggest difference in that one was the fact that New England actually tied the game on a 24-yard field goal just before halftime. But the Chargers rolled over the Patriots in the second half, scoring 24 unanswered points in the blowout and bringing the Patriots 21-game home win streak to a screeching halt. It was one of the first times I heard real, sustained, angry booing at Gillette Stadium. After the game, the Chargers and coach Marty Schottenheimer spoke admiringly of New England’s resolve, while wondering just how much could one team take when it came to injury. The following Wednesday, Brady appeared to take the words from Schottenheimer the wrong way, saying darkly, “You don’t talk about our team. He has no business talking about our team. He’s not our coach. We’ll let our coach talk about our team.” That Patriots’ team finished 10-6 before losing in the divisional round to the Broncos.

Prior to Sunday’s 27-point loss, this 38-13 defeat to the Dolphins was the worst home loss — at least in terms of point total — of the Belichick era. Otherwise known as the Wildcat game, it was the only time I have ever seen a Belichick-coached team completely unprepared for what it was going through. Veterans screaming at each other on the sidelines, flinging helmets; coaches scratching their heads at what they had just witnessed. In the wake of Brady’s season-ending knee injury suffered earlier the same month, it was easy to dismiss this team after three games as a group that had little-to-no chance to make any noise. But without Brady, this team became one of the more mentally tough groups of the last 20 seasons, winning five of six down the stretch and just barely missing out on the playoffs. In the end, the legacy of the 2008 team wasn’t defined by the Wildcat game. Instead, that brutal loss served to stoke its competitive fires on the way to a respectable 11-5 record.

This was the game against the Saints where Belichick was caught by NFL Films lamenting to Brady that he just “can’t get [the roster] to play the way I want them to.” The Patriots were actually within seven with just over four minutes to go in the first half, but could get no closer, eventually dropping a 38-17 loss. Honestly, in this one, the stats weren’t all that bad, but there was zero chance they were going to win this one. Instead, this one makes our list because of what it represented: the bottoming out of a team that was now clearly a step behind the league leaders like the Saints, who would go on to win the Super Bowl that year. (On a personal note, I’m not sure I have ever been in a building as loud as the Superdome was that night. In an open-air press box, several colleagues wore earplugs to help muffle the sound, which included a jazz band playing in the stands right underneath us.) Ultimately, it was hoped this loss would light a fire under the team — instead, it was one of six road losses the team would suffer that season. A miserable loss by a miserable team.

This piece originally appeared in Point After, the Globe’s Patriots/NFL newsletter. Sign up to get it straight to your inbox on Mondays and Fridays.