Whatever lingering hope New England fans might have had prior to Sunday’s 33-6 loss to the San Francisco 49ers was washed away in a tidal wave of incompetency at Gillette Stadium. Maybe the loss to the Broncos the previous weekend was a simple matter of lack of practice, a hiccup in a season that expects such days for all teams. Maybe the Patriots really were more like the team that impressed over the first three weeks of the season, not the malaise that has trotted out there for the last month. And yes, maybe the likes of Cam Newton and Julian Edelman would finally get their signals on the right page, ultimately helping to fix an offense that has been among the worst in the NFL with a measly average of 19.2 points per game.
Advertisement:

If anything, Sunday’s loss to the 49ers ultimately defined who the 2020 Patriots are in more absolute ways than victory would have managed. For the first time in 12 years there will be no postseason aspirations for the Patriots, a team currently in the purgatory of the NFL, a place they haven’t been in two decades.

There’s no point in winning any longer, not when every victory moves the Patriots further away from a franchise-altering player in next spring’s draft.

The good news is that the Patriots are only two games behind in the sweepstakes for Trevor Lawrence, the 21-year-old Clemson junior quarterback who only has a 178.6 quarterback rating this season for the 5-0 Tigers. Providing Lawrence declares he’s skipping his senior year, as he’s expected to do unless he figures one more year of college is better than playing for the Jets, he will be the de facto, slam-dunk No. 1 pick. Not since Andrew Luck (gulp) has there been such a generational quarterbacking talent making general managers throughout the NFL drool with anticipation.

It is the 0-7 Jets in the driver’s seat for the time being, even with Sam Darnold playing the role of latest talent to be destroyed by Adam Gase. But the Patriots still face their AFC East rivals two more times this season, leaving plenty of room to deliberately tank the rest of this year’s campaign away. That would also assume that the Falcons, Giants, Jaguars, Texans, Vikings, and Bengals can finish with more than two wins to their names as well. Not likely, and only the Bengals, with rookie Joe Burrow behind center, wouldn’t have Lawrence at the top of their draft board.

That’s a lot of leapfrog tanking for any team to accomplish, never mind in Foxborough, where Bill Belichick has built a program of consistency and greatness. The only thing that might make him gag more than watching Tom Brady’s performance on Sunday might be laying down against his opponent, something that would seemingly go against every edict in his coaching bible. No matter the reward.

Alternately, Patriot fans should start looking at the remaining schedule not in terms of winnable games, but how many they can lose.

Realistically, after what we saw against San Francisco, they all should be losable games.

As average as the Bills have looked the last three weeks, they’re still better than what the Patriots have to offer, and deserve the crown in the AFC East. The Ravens, Cardinals, and Rams should roll over this team. That leaves games against the one-win Texans, two-win Chargers, the emerging Dolphins, and Jets, which just might be the only team left that will take some old-fashioned flopping in order to secure a pair of ‘L’s.’

But even if the Patriots don’t land in the top spot of the draft, there are still other quarterbacks to target in order to start the next generation of the Belichick dynasty. Ohio State’s Justin Fields (who had a 95.2 percent completion percentage in Saturday’s 52-17 win over Nebraska Saturday) and North Dakota State’s Trey Lance are just two others who could be the next version of Justin Herbert, the sixth-overall pick who has thus far, shown to be the best quarterback from the deep 2020 NFL Draft.

Since the Patriots need to draft a franchise-altering quarterback for the first time in almost 30 years, what’s the point in stringing a few meaningless wins together the rest of the way?

If the draft were held this week, the Patriots would have the 11th pick. They can do better. They must do better.

See if the Dallas Cowboys, now down quarterbacks Dak Prescott and Andy Dalton, would toss a mid-range draft pick your way to take Newton. End the disinterested Edelman’s misery and send him to Tampa to join Brady’s deplorable happy-fun time crowd. The Patriots need to be sellers at the trading deadline. Their fans need to understand that losing will be the best avenue.

They can take it. Despite the legion of followers that have still devoted their hearts to their hero in Florida, one pathetic season at the tail end of 20 incomparable ones shouldn’t be that much to complain about. Losing Brady and having a handful of players take a COVID opt-out might have have the best things to happen for this team. Now they can tank, and not, necessarily, look like they’re tanking.

It’s strange for Patriot fans to treat every win as a loss, yet here we are in 2020, a year filled with abnormalities of every single sort.

The worst thing the Patriots can be moving forward is average. Luckily, they proved on Sunday that they are much worse than that. It’s time to embrace the paltriness. Lose at all costs.

With this team, it shouldn’t be all that difficult. 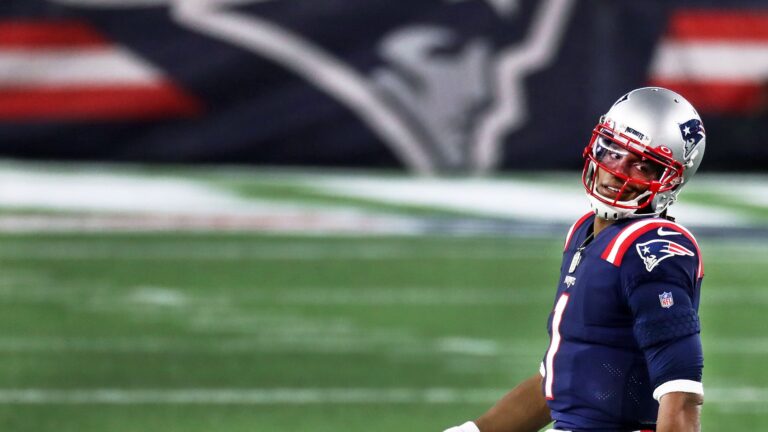 Cam Newton cites mental mistakes for poor play vs. 49ers, says he needs to rid himself of a ‘funk’